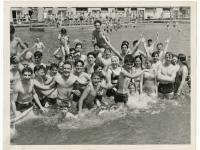 The depth and breadth of the Historical Society of Pennsylvania’s 20th-century collections is significant. These rich collections, dating up through the late 20th century, have both a regional and national scope. They document the greater Philadelphia area, national figures and organizations, as well as individuals and associations that had a nationwide impact. The experiences of diverse segments of society, including African Americans, women, and various ethnic and immigrant groups, are well represented.

This guide, though not comprehensive, is meant to showcase the extensive nature of HSP’s 20th-century holdings and help users locate collections that may be of interest to them.

The following list of collections include personal papers as well as the records of institutions and associations that relate to the visual and performing arts, literature, music, and architecture.

Personal papers, family papers, and institutional records document various businesses and industries in Philadelphia and the surrounding region. Some of the industries represented include insurance, real estate, banking and finance, manufacturing, coal mining, transportation, printing and publishing, and retail.

The collections that fall under this category include those that relate to education as well as to community, social service, ethnic, and benevolent organizations and associations.

Many of HSP’s collections document 20th-century family and social life, particularly those of the elite and burgeoning middle classes. Many of these family papers also include genealogical information.

The Historical Society of Pennsylvania is one of the most complete and professional genealogy centers in the nation, and the largest in the Mid-Atlantic region. The Society's 20th-century genealogy-related collections include family papers, funeral records, and institutional records. Many of these collections document the practice of this increasingly popular activity.

The legal profession, significant litigation cases, and matters relating to civil rights and international law are documented through personal papers and organizational records, including the records of law firms and professional associations.

HSP has a significant number of graphic material collections. The photographic collections offer a visual history of Philadelphia and the surrounding region, capturing people, places, and events, and offer a glimpse into the development of photography throughout the century. Materials contained in the graphic collections include photographs, posters, prints, slides, and drawings.

Several topics are covered in these collections, in particular Philadelphia political history. Others include national politics and international relations as well as political advocacy and reform movements.

The Historical Society has also engaged in projects as part of the New Immigrants Initiative with the goal of expanding its documentation of Arab, African, Latino, Southeast Asian, and Korean immigrant communities in the greater Philadelphia area.

Collections relating to religion include the histories of churches located in the Philadelphia region as well as the religious activities of ethnic and immigrant communities.

Collections in this category relate to inventions, engineering, and developments in infrastructure, particularly transportation. They also document topics relating to public health and nursing.

Particularly strong among HSP's 20th-century military collections are those relating to World War I and World War II. Personal papers and organization records document the experiences of those involved in military service as well as the experiences of those on the home front. Home front activities that are documented include the work of civilian relief and service groups, particularly those staffed by women. The maltreatment of Japanese Americans during World War II is also documented in several significant personal and family papers.