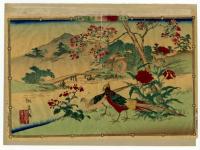 The Historical Society of Pennsylvania's collections include a variety of resources on the experiences of Chinese immigrants in Philadelphia and beyond. Resources include published materials, manuscript collections, newspapers and other periodicals, photographs, and other graphics.

To learn more about the Society's holdings, search our online catalog for "China", "Chinatown", or "Chinese." You should also search for family names, town or township names, or other locations and landmarks that may provide insights into your family history.

Note that some immigration and other types of records are now available online. HSP offers visitors to our library free access to AncestryInstitution.com; FamilySearch.org is free for all users. See an HSP Reference Librarian for further assistance using these online resources in the library.

You may also be interested in watching the video recorded at a May 2013 HSP workshop titled "Family Legacies: Genealogical Resources for Chinese Americans." Genealogist and author Jeanie Chooey Low discussed techniques for interviewing family members and deciphering gravestone inscriptions.

Chinese Americans researching their family histories face special challenges, including "paper names" and limitations and/or biases in written records from both China and the United States.

For a general overview of these issues and how to begin your genealogy project, check out:

You may also want to check out the National Archives' guide, "Genealogy: Ethnic Heritage." Its section on Asian resources includes a variety of helpful Chinese genealogy resources.

HSP has microfilm and print copies of several Chinese-focused periodicals published in the United States and Canada, including:

HSP's manuscript collections help to document the experiences of Chinese Americans in Philadelphia and beyond. Highlights from our collections include:

The Yam Tong Hoh and Daisy Law papers (Collection 3020) span the years 1919 to 1977, and focus primarily on their lives while residing in the United States as emigrants from China. The collection reflects the work of Yam Tong as an educator and minister in both California and Philadelphia, as well as his untiring work for the True Light School of Hong Kong. The collection complements the Reverend Dr. Yam Tong Hoh Papers (collection MSS 126), also located at HSP, by providing biographical material on Yam Tong's first wife, Daisy Law Hoh, as well as Rev. Hoh.

The Holy Redeemer Chinese Roman Catholic Church was founded in Philadelphia's Chinatown in 1941 as a mission church of the parish of St. John the Evangelist. The Holy Redeemer records (collection MSS030) consists of the unbound contents of two scrapbooks: programs, invitations, announcements, newspaper clippings, and personal correspondence from contributors to the scrapbooks.

This guide was made possible by support from the Connelly Foundation.