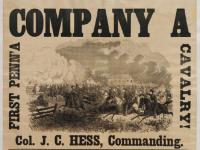 Interest in the American Civil War is as intense as ever. In the United States, more books are published annually about the 1861-65 conflict between the North and the South than any other historical topic. Whether one is exploring an historical aspect of the Civil War or investigating an individual who was involved in that great upheaval, the Historical Society of Pennsylvania's library contains some of the most impressive resources for research. Our manuscript collections alone contain the largest quantity of documentary resources on the Civil War available in the Mid-Atlantic region.

Forces that led up to the Civil War are documented in HSP's collections. Resources include the papers of the Pennsylvania Abolition Society (collection #490), the Underground Railroad records of William Still, and letters of radical John Brown. Just weeks after the Confederacy adopted its constitution, a Southern woman sent a printed edition to the librarian of HSP.

The Civil War in all its aspects, military and political, is reflected in General George G. Meade's letters written between 1861 and 1872. The letters describe leadership, plans of campaigns, strategies of the Army of the Potomac, accounts of the battle of Gettysburg, controversies among commanding officers, and issues before the American public.

The War of the Rebellion Official Records of the Union and Confederate Armies was published serially between 1881 and 1900. Gleaned from millions of pieces of information, its publications—bound in 128 volumes at HSP—contain tens of thousands of documents including general orders, dispatches and correspondence of commanding officers in the field, casualty reports, telegrams, and records of discontinued commands. Published in 1901, the index alone to this monumental work contains over 1,100 pages and more than 100,000 listings.

For overviews of the war, HSP offers a large selection of published general histories, and back issues of periodicals such as Civil War Times.

For researchers interested in statistics and logistics of the Civil War, there are ledger books and journals, as well as maps, in the Andrew Atkinson Humphreys papers. The Pennsylvania 52nd Infantry Regiment papers contain muster roles and general orders, while a portion of the records from William H. Horstmann and Sons gives specifications for Civil War military uniforms.

On their long marches south, Union troops would stop at Voluntary Refreshment Saloons for coffee and rest. Records kept by the saloons are mostly statistical. However, troops often befriended saloon proprietors and later wrote them accounts of battles in which they fought. HSP's collection includes these records.

Other perspectives on the Civil War come from HSP's collection of Sanitary Commission reports. The sanitary commissions were formed to care for wounded soldiers, and did so for troops from both sides. Sanitary commissions often held fund-raising events such as the Great Central Fair held in 1864 at Philadelphia's Logan Square, and accounts of these activities describe the treatment of casualties and the civilian concerns about the war.

The Citizen's Bounty Fund Committee was formed in Philadelphia in 1862 to encourage enlistments through payment of bounties during the Civil War. The papers in HSP's collection trace the committee's activities through 1866. They include: subscriptions to the fund, correspondence on enlistments and donations of tents and other equipment, certificates of volunteer enlistments, financial records, and minutes. HSP's documentary collections can also shed light on such obscure Civil War behavior as "bounty jumping," other forms of desertion, and occasional abuse of the wounded by physicians.

Philadelphia newspapers and other periodicals from the war years are accessible at HSP, either physically or on microfilm. HSP's collection of Forney's War Press, published from 1862 to 1865, presents engravings, news from correspondents, casualty reports, poetry, wit, and humor.

The African-American military experience in the Civil War is also described in HSP's resources. For instance, HSP has a register with the record of admissions to the Free Military School in which colored troops were trained at Camp William Penn.

Certain diaries in HSP's manuscript collections are important sources of Civil War information. For example, Thomas S. McCahan kept a diary between 1862 and 1864, when he served as captain with the 9th Pennsylvania Cavalry of the 92nd Regiment. Entries in his diary describe skirmishes, battles, and other activities with the Army of the Cumberland in Kentucky, Tennessee, Alabama, and Georgia.

John W. Alloway was a private soldier in Cooper's Battalion of the 1st Pennsylvania Artillery. His 1863 diary records incidents during the Chancellorsville and Gettysburg campaigns, and the dispatch of troops to quell draft riots in New York City.

From a variety of focuses, Philadelphia artist Joseph Boggs Beale chronicled his experience while serving with the 33rd Pennsylvania Volunteer reserves.

A prisoner of war's view of the conflict is provided by the journal of Cuban-born Federico Fernandez Cavada, which is in HSP's Edward Carey Gardiner Collection. Cavada, a lieutenant-colonel of the 114th Pennsylvania Volunteers, was captured at Gettysburg. His journal, written in Libby Prison at Richmond, Virginia, extended from July 1863 to March 1864. An amateur artist, Cavada also kept a sketchbook. In these records, he describes the inhuman conditions in prison and expresses his hopes for a prisoner exchange. After his release, he lived until 1871.

Probably the most poignant accounts of day-to-day living during the Civil War are provided in the letters of soldiers to their loved ones, sequences of personal correspondence which often continued until a soldier's death. Hundreds of these letters vividly describe the routine of camp life, and express the hopes, fears, and prayers of ordinary soldiers in the field. See HSP's subject guides, "Civil War Manuscripts & Newspapers" and "Guide to Women During the Civil War," for suggestions of where to find more personal accounts.

Some materials seem to dwell on a Civil War topic to exhaustion. For example, among the Rawle Family Papers at HSP is a series of letters written by Colonel William Brooke Rawle over a period of 49 years. This correspondence begins the day after the Battle of Gettysburg in 1863, continues to 1912, and focuses almost exclusively on the right-flank cavalry action during the battle, including numerous hand-drawn maps!

James Cornell Biddle was a lieutenant colonel in the Pennsylvania 23rd Infantry Regiment. In HSP's collection of Biddle's letters to his wife Gertrude (nee Meredith), he reports on Civil War military operations and the strategy of the capture of Fort Hatteras, the occupation of New Orleans, and with Meade at the battles of Chancellorsville, Gettysburg, and Appomattox. There are many sketches of the position of troops and frequent references to Union and Confederate leaders, especially Ulysses S. Grant, Joseph Hooker, Stonewall Jackson, Robert E. Lee, and Meade. Coming from a Union officer, his observations about Lee were unusually complimentary.

Letters of Union and Confederate generals and other officers can also be found in HSP's Simon Gratz and Ferdinand J. Dreer autograph collections.

HSP has an extensive genealogy collection and many other resources for tracing ancestries to the Civil War period. One of the most important sources is Bates' History of the Pennsylvania Volunteers. For other resources, see Family History & Genealogy Resources.