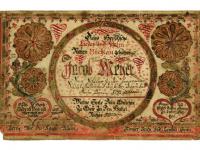 The Historical Society of Pennsylvania's collections include a large number of resources that relate to German-speaking immigrants in Philadelphia and beyond, dating from the earliest colonists into the twentieth century. Resources include published materials, manuscript collections, newspapers and other periodicals, photographs, and other graphics.

To learn more about the Society's holdings, search our online catalog for "German", "Germanic" or "Germany". You should also search for family names, town or territory names, or other locations and landmarks that may provide insights into your family history. Keep in mind that some materials may be in German only. Also remember that some German words can be Anglicized in different ways; you may want to search for alternate spellings.

Note that some immigration and other types of records are now available online. HSP offers visitors to our library free access to AncestryInstitution.com; FamilySearch.org is free for all users. See an HSP Reference Librarian for further assistance using these online resources in the library.

German Americans are the largest ancestral group in the U.S., according to FamilySearch.org. But it may be more accurate to call this group "German speaking;" some of these "German" immigrants came from Austria, Switzerland, France, Poland, Russia, and beyond. In fact, no strong unified Germany existed until 1871. The country's borders changed again in the twentieth century after each world war. Family historians researching their German roots will need to keep these changing borders in mind as they research their origins.

For a general overview of how to begin your German family history project, check out:

You can find other tips and resources in the National Archives' guide, "Genealogy: Ethnic Heritage." For a general overview on genealogy, check out HSP's "Family History & Genealogy" subject guide.

HSP has a variety of published resources about German American immigrants, including church records, passenger lists, newspapers, periodicals, and more. For a more detailed list of German serials in HSP's Balch Institute for Ethnic Studies collection, see the "German" section of the Balch Manuscript Guide. Keep in mind that some materials, especially newspapers, may be in German.

Researchers may also want to search HSP's online catalog for the name of the church where their ancestor worshipped, the town or county where they settled in the U.S., or even the territory where their ancestor originated, such as "Baden", "Palatinate", or "Wurttemberg". Other highlights from HSP's collection include:

Brigitte Burkett, Emigrants from Baden and Wurttemberg in the Eighteenth Century (call number REF E184.G3 B89 1996)

HSP's manuscript collections help to document the experiences of German Americans in Philadelphia and beyond. Highlights from our collections include:

The Bergdoll family papers (collection MSS021) and photographs (collection PG118), dating from 1910 to 1974, include legal documents, financial papers, newspaper clippings, photographs, and other materials related to this prominent Philadelphia German family who operated the Bergdoll and Sons Brewing Co. The bulk of the collection relates to Grover Cleveland Bergdoll (1893-1966), particularly his youthful experience as a race car driver, his trial and imprisonment for evading the draft during World War I, and the settlement of his estate.

The Cannstatter Volksfest-Verein of Philadelphia records (collection MSS128) focuses on this German-American benevolent society founded in 1873 by a group of local businessmen. From its inception, the group aimed to uphold German culture, sociability, and charity through a yearly festival in the tradition of the annual harvest festival at Schwabian Spa in Bad Cannstatt, Germany. The collection is composed primarily of entertainment committee and director's meeting minutes, membership lists, and miscellaneous printed items.

The Abraham H. Cassel collection (collection 1610) contains printed material from the library of Abraham Harley Cassel, a book collector and historian who acquired over 50,000 books, pamphlets, and documents about early Pennsylvania history. Cassel was a member of the Dunkard Brethren who wrote about and collected books on early Pennsylvania German religious history. His library attracted scholars and historians of Pennsylvania and German American history, and at his death was divided among archives, libraries, and private collectors. The portion of Cassel's collection that is housed at HSP contains forty-seven items which date from 1680 to 1893, including hymn books, religious tracts and catechism, diaries, letters, genealogical records, and examples of Pennsylvania German folk art and fraktur.

The National Carl Schurz Association collection on Carl Schurz (collection MSS079) contains a variety of materials related to this prominent German immigrant. After immigrating to the U.S. in 1852, Schurz served as American minister to Spain in 1861-1862, as a general in the Union Army from 1862-1865, was elected to the U.S. Senate from Missouri in 1868, and served as U.S. Secretary of the Interior in 1877-1881.

The Francis Daniel Pastorius papers (collection 475) provide insight into the founder of the settlement of Germantown, which would later be incorporated into Philadelphia. Trained as a lawyer, Pastorius in 1683 purchased land in Pennsylvania on behalf of members of the German Frankfort Company. He is also known for his anti-slavery stance, joining the Pennsylvania Quakers in signing a protest against slavery in 1688 (the first anti-slavery document written in the United States).

The United Singers of Philadelphia (collection 3524) were an umbrella organization that represented approximately forty area singing groups, the majority of which were comprised of German immigrants. This collection dates from 1887-1932, although the bulk of the material is from 1905-1916. It includes a scrapbook compiled by the United Singers of Philadelphia, a German songbook, and a panoramic group photograph.

Now defunct, the Volksverein of Philadelphia (collection 3530) was a local unit of the Catholic Central Union of America, which is a national Catholic social action and social welfare organization. The collection contains minutes of the meetings of the Volksverein, and job, financial and subscription records of the organization's official organs, Philadelphia Volksblatt and Nord Amerika.

This guide was made possible by support from the Connelly Foundation.