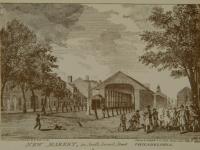 Philadelphia has more than 100 separate neighborhoods, each with its own historical memories. The collections of the Historical Society of Pennsylvania contain countless materials that document the rich histories of Philadelphia’s communities. The following is a brief discussion of the diversity of sources available at HSP.

For most users, Discover is the best place to begin a search about Philadelphia's neighborhood histories. This online catalog includes information about HSP’s manuscript collections, as well as print materials, maps, microfilm, and more. Researchers may want to search for neighborhood names, landmarks, geographic features, notable people, organizations, or other terms that may help provide insight into a neighborhood's history. Descriptions of all manuscript collections are available in that online catalog, and many collections have finding aids online or at HSP that provide more information.

HSP’s Digital Library is a growing online repository of images and digital files from our collections, including manuscripts, maps, photographs, prints, as well as video and audio records. Several of HSP’s most notable collections, including the David J. Kennedy watercolors, are digitized in their entirety. All images are available for purchase as both archival prints and digital downloads, and new content is added every week.

Visitors to HSP's library should also look for names and other terms of interest in our manuscripts card catalog, known as PC1 (and not available online), which serves as a name index for many manuscript items.

You may also find helpful information in HSP's Architectural Resources subject guide. You can also contact a Reference Librarian for further assistance.

For many neighborhoods, some of the best information available can be found in the records of the social, cultural, and economic organizations serving the interests of the local citizens. HSP holds the records of literally dozens of organizations, societies, clubs, and similar groups, in which members of the local community served as leaders or benefited as participants.

Many business collections contain records created and maintained by men and women in their roles as business owners and entrepreneurs. Information found in these accounts includes data about manufacturing, consumer services, and neighborhood and household economic activities.

If you're interested in individual properties, you may want to search individual property surveys compiled in conjunction with fire insurance policies. These records can provide a wealth of architectural information, including types of structures, building materials, ownership and drawings. HSP holds the surveys of the following four Philadelphia companies:

Philadelphia Contributionship for the Insurance of Houses from Loss by Fires records, 1839-1965 (Collection V41)

In-house indexes are available for all four companies. The Franklin Fire Insurance Company and Pennsylvania Fire Insurance Company records may also be searched via Bryn Mawr's Places in Time website. A related collection, the Hazlett and Moss records, contain the records of a real estate company active in residential development in the city and its suburbs from 1902 to 1927. The records include information on address, date, block plan, building type, ward number and county.

When researching neighborhood histories, you may also want to investigate personal accounts found in diaries, memoirs, and correspondence, which often reflect the private lives of Philadelphians at various points in time. Try searching in HSP's online catalog for "diary", "diaries", "memoir", or other search terms that interest you, or ask a Reference Library for guidance.

In addition to searching in our online catalog and HSP's Digital Library, researchers may want to consult HSP's PC4 graphics card catalog, which is available only in the library's Reference Room. Information in PC4 and other card catalogs may not be captured by online-only searches. Here are a few notable image collections at HSP:

The Historical Society of Pennsylvania Penrose Pictorial Philadelphia collection (collection V60) is one of HSP's best collections on Philadelphia's architectural history. The photographs depict a wide variety of subjects, but the majority of the collection depicts residences, streets, and historical buildings. There are some photographs of cities and towns as well as transportation, hotels, mills, ships, and theatres. There are some views of everyday life represented by sports, recreation, and people at work. Of particular interest are the photographs of Old City buildings that were demolished to build the Ben Franklin Bridge as well as the area demolished to build the Convention Center. The photographs are arranged by subject or by address.

The Historical Society of Pennsylvania Photograph collection (collection V59) is a rich visual resource on a variety of topics, with an emphasis on Philadelphia and the surrounding region. Subjects particularly well documented in the collection include local streets and residences, Fairmount Park, Friends’ Meeting houses, and historic buildings and sites. Other subjects include bridges, churches, factories, fire engines and companies, hotels, monuments, schools, societies and clubs, the Centennial International Exposition, Lincoln’s funeral, and the Historical Society of Pennsylvania. The collection spans from the mid-19th century to the late 20th century.

The Historical Society of Pennsylvania Print collection (collection V89) also provides a rich visual catalog of various local, regional, national, and international areas, locales, institutions, and scenes. Despite the vast range of subjects under which the collection is arranged, the majority of the collection is centered on Philadelphia and Pennsylvania. The images date from the early 1800s to the mid twentieth century. Subjects within the collection are quite varied and include everything from banks, insurance companies, museums, and libraries, to stadiums, churches, bridges, mills, schools, and amusement parks. Under the heading “stores and factories,” images are arranged according to what was being sold or manufactured: e.g., chemical supplies, dry goods, glass, iron, marble, pianos.

The David J. Kennedy Watercolors collection (collection V61) contains a multitude of views of Philadelphia as it appeared between 1840 and 1890. He painted various scenes of the city, including the homes of prominent residents of the city, as well as ordinary street views. Many of the buildings Kennedy illustrated no longer exist. The collection has been digitized in its entirety and is available in HSP's Digital Library here.

The Philadelphia Record Photograph Morgue (collection V07) contains the photographs taken for the Philadelphia Record, a newspaper that published from 1879 to 1947, when it was absorbed by the Philadelphia Evening Bulletin. Photographs are arranged by person or by subject. Subjects include explosions, auto accidents, schools, churches, farms, the war effort, women workers, sports, beauty pageants, army hospitals, military veterans, railroads, Eastern State Penitentiary, and Philadelphia stores. Many photos document the Depression and World War II and include captions.

The Thomas H. Shoemaker Germantown and Philadelphia Portraits and Views (collection V86) consists of more than 12,000 images of historical places and colonial houses (many of which no longer exist) in and around the Germantown, Chestnut Hill, and Mount Airy sections of Philadelphia. In addition to exterior shots of houses, there are also images of doorways and some house interiors. There are also photographs of views along the Wissahickon Creek; images of graveyards, meeting houses, and churches; various portraits; and more. While the collection contains mostly photographs, with the bulk of items dated between 1889 and 1915, there are also lithographs, india ink drawings, prints, engravings, and silhouettes.

A wealth of information may be found in the many maps and atlases that document the region. The earliest atlas for Philadelphia was published in 1858, just four years after the city was reorganized (see Philadelphia City Landscape, below). By reviewing atlases, researchers can acquire a sense of the development of a neighborhood or region. Maps often complement this information, though they frequently offer less detail regarding individual properties.

In addition to searching in our online catalog and HSP's Digital Library for maps and atlases, researchers may want to consult HSP's PC4 graphics card catalog, which is available only in the library's Reference Room and which catalogs HSP's holdings of maps, atlases, and other cartographic material. Information in PC4 and other card catalogs may not be captured by online-only searches.

Community newspapers and newsletters can also provide a sense of the social and cultural history of specific regions and neighborhoods.

All publications can be located through HSP's online catalog. Subjects of particular interest include individual neighborhood histories, city-wide histories, personal narratives and biographies, and charitable organizations.

Of course, the city of Philadelphia has changed its borders and renamed its streets on various occasions over its history, with major street renaming efforts in 1858 and 1897.

You can explore these changes at the Philadelphia Historic Street Name Index, in the maps and other resources presented online by the Greater Philadelphia GeoHistory Network, or by consulting Change in Names of Streets in the City of Philadelphia, 1897-1930 (REF F 158.67 .A1 C43).

The city also renumbered almost all city addresses in 1856, to take effect in 1857. Prior to this date, building numbers ran consecutively with no changes for new blocks. For instance, 146 Chestnut Street was located between 6th and 7th streets. Beginning in 1857, the city renumbered with the same block numbering structure we use today: the 100 block of Chestnut Street is located between Front and 2nd streets, etc.

The Philadelphia City Archives provides an overview of all of these changes on its web page about architectural research resources.

While HSP encourages historical preservation and research, it does not certify buildings or locations as historic. If you would like a house or building to receive historical certification, you may wish to contact your local historical commission. In Philadelphia, contact the Philadelphia Historical Commission (Room 576, City Hall, Philadelphia, PA 19107) at 215-686-7660. For additional resources, you may want to consult the Preservation Alliance for Greater Philadelphia.