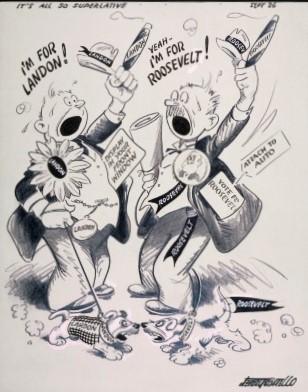 This guide will help you navigate HSP's holdings related to federal, state, and local officials, and government publications from the Commonwealth of Pennsylvania and the City of Philadelphia. Other HSP collections relate to Philadelphia political history; the political debate over slavery, suffrage and women's rights; labor movements; and political advocacy and reform movements.

To learn more about HSP's holdings, search our online catalog for the subjects that interest you, including politicians, political parties, government institutions, reform movements, and more. Visitors to HSP's library should also look for names and other terms of interest in our manuscripts card catalog, known as PC1 (and not available online), which serves as a name index for many manuscript items.

To learn more about resources related to early political history, see HSP's subject guide to the Founding of Pennsylvania and the United States.

The following is a small sampling of collections and sources available at HSP. Please contact a Reference Librarian for further assistance.

Although not a government repository, HSP has many government publications from the Commonwealth of Pennsylvania and the City of Philadelphia dating from the colonial period to the twentieth century. Such publications include legislative proceedings, committee hearings, statutes, case law, executive documents, constitutional convention proceedings, and the reports of departments, offices, and commissions. Try searching for your topic of interest in HSP's online catalog to see what's available.

The Hampton L. Carson papers includes letters from Pennsylvania governors, judges, attorneys general, and others involved in the administration of law and justice.

HSP also holds court dockets from justices of the peace in several Pennsylvania counties, including those of Joshua Barker, John Atkinson and George H. Rigby, and Henry Beader.

Labor movement-related collections include the records of the Philadelphia Typographical Union No. 2 and of the Workmen’s Circle Philadelphia District, the Ossip Walinsky papers, and a microfilm copy of the Morris Hillquit papers. There are also a number of labor movement newspapers, including Justice (and its Italian-language edition, Giustizia), Industrial Solidarity, Labor Leader, and National Labor Tribune.

Materials documenting socialist politics include the James J. Cleary papers, the Forverts and Morning Freiheit newspapers, and microfilm copies of several collections, including records of the Socialist Labor Party and the Socialist Party, papers of Morris Hillquit and Darlington Hoopes, and newspapers such as Socialist Call, The Worker, The People, and Novyi Mir. A collection of Philadelphia County Board of Assistance papers document the firing of public employees for alleged communist affiliations.

Other political advocacy and reform initiatives are represented by the Indian Rights Association and Pennsylvania Prison Society records, and by the papers of Philadelphia Zionist leader Rose I. Bender, Japanese-American rights activist Sumiko Kobayashi, and African-American journalist/advocates James Samuel Stemons and Justine J. Rector. The Herbert Welsh collection documents a leader of the Indian Rights Association who was active in a wide range of reform efforts. The Leonard Covello papers include correspondence with New York City reform political leaders Vito Marcantonio and Fiorello LaGuardia. The Philadelphia Fellowship Commission records document a pioneering civil rights group after World War II. The Thelma McDaniel collection comprises pamphlets and flyers from a range of civil rights, Black nationalist, and leftist organizations. The papers of Minnesota Populist and novelist Ignatius Donnelly are available on microfilm.

Far-right politics are represented by Imperial Night-hawk, Kourier, and Social Justice magazines (all on microfilm) and by a number of Ku Klux Klan books and pamphlets, as well as government reports about the Klan.

The Dennis Clark papers contain extensive materials on Irish-American responses to the political struggles in Ireland and Northern Ireland. Several collections document politics related to Central and Eastern Europe, from pre-World War I independence movements to ethnically based anti-Soviet campaigns after 1945. Among these materials are the papers of Edward Behuncik, Charles Belohlavek, and Vladimir Hurban; the records of the American Latvian Association in the United States, Baltic Women’s Council, and Polish National Alliance of the United States of North America; and numerous books, pamphlets, and serials.

Political cartoons can be found in various collections at HSP, including the HSP cartoons and caricatures collection, the Balch Broadsides: Satirical Cartoons collection, the Hampton L. Carson papers, and the Pennsylvania Cartoons 1902-1915 scrapbooks, among others.