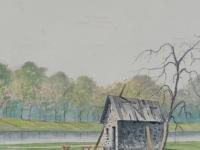 Few disease outbreaks in the history of early America proved as tragic as the Philadelphia Yellow Fever epidemic of summer, 1793, and fewer still have lingered longer in historical memory. A bustling center of international trade and commerce that welcomed people, goods, and pathogens from around the world, Philadelphians were well-acquainted with infectious disease prior to the 1793 outbreak. The city had even known sporadic Yellow Fever outbreaks at various points throughout the eighteenth century.  But that feared disease returned to Philadelphia with a vengeance in summer, 1793, via West Indian trading vessels carrying French refugees fleeing the island of Santo Domingo in light of long-standing civil unrest and slave rebellion. Over two thousand refugees flooded into Philadelphia, some of whom had succumbed to Yellow Fever at sea.  With these trading vessels came the worst infectious disease outbreak the city had hitherto experienced.

Cases of the “pestilence,” as some referred to Yellow Fever, spread rapidly from residential areas surrounding Philadelphia’s port to other districts throughout the city. Though residents of impoverished quarters seemed particularly vulnerable to infection, none could escape the disease’s terror. As word spread that Yellow Fever had returned to Philadelphia, many affluent residents fled for their country estates or homes of relatives. Commercial and governmental operations ground to a halt. Those who could not escape the city witnessed grisly scenes of sickness and death round seemingly every street corner. Yellow Fever claimed 5,000 lives, or ten percent of Philadelphia’s population, between August 1 and November 9, 1793.

Yellow Fever is a virus transmitted between humans by mosquitoes. This method of transmission was unknown in the eighteenth century, however; the role of mosquitoes in carrying the disease was first proposed in 1881, and viruses were not discovered until much later. The germ theory of the spread of infectious diseases remained unproven in the last years of the eighteenth century, which hampered consideration of possible causes of the disease. Proper prevention, diagnosis, and treatment of Yellow Fever emerged as issues of frantic and often contentious public debate in Philadelphia and across the young United States. Philadelphia was the center of early-national American economic, political, and cultural life. The debilitation of the city due to disease posed potentially dire consequences for the region and, indeed, the entire country. A sense of mystery surrounding the disease’s origin and transmission only deepened the public’s terror.

Commentators during and after the Yellow Fever epidemic observed that the episode brought out the best and worst in Philadelphia’s residents, as municipal leaders, prominent physicians, and everyday residents struggled to understand the cause of Yellow Fever, to manage the outbreak, and to escape its brutal path. While none succeeded in stamping out the disease, historical accounts of the city’s lively response to the fever reveal much about the civic, cultural, and intellectual workings of early America’s largest and most prosperous city.

The lesson presented here—What the Doctor Ordered: Dr. Benjamin Rush Responds to Yellow Fever—is best implemented at the end of a lengthier unit on the Yellow Fever epidemic of 1793, after students have acquired sufficient contextual background to pursue independent work with primary sources related to the epidemic.

What role do multiple causations play in describing a historic event?
What role does analysis have in historical construction?

Estes, J. Worth, and Billy G. Smith. A Melancholy Scene of Devastation: The Public Response to the 1793 Philadelphia Yellow Fever Epidemic. Canton, MA: College of Physicians of Philadelphia and Library Company of Philadelphia, 1997.

Howell, J.H. Bring Out Your Dead: The Great Plague of Yellow Fever in Philadelphia in 1793. Philadelphia: University of Pennsylvania Press, 1949.

Many other Philadelphia organizations have school programs and lesson on Yellow Fever. See the links and related content on this page for some examples.

Building on their primary-source knowledge of Dr. Rush’s Yellow Fever diagnosis and treatment procedures, students will analyze two letters from friends of Dr. Rush written during the 1793 epidemic, and one letter that Rush wrote to a fellow doctor during the outbreak.  The letters offer opposing viewpoints on the effectiveness of Rush’s methods.  Students will: 1) Read the documents; 2) Summarize the documents’ content; 3) Evaluate the merits of Dr. Rush’s decision-making; 4) Place the documents in the context of Yellow Fever patient letters analyzed in class; and 5) Consider how they and their family might have reacted to the Yellow Fever epidemic, if they had lived in Philadelphia in 1793.

Distribute one “Assignment” document packet (including instructions, two letters, and questions worksheet) to each student.  Instruct students to open the document packets to the directions page.  Ask for volunteers to read the directions and essay questions aloud.  Page through the packets with the students, so that they become familiar with each letter.  Review vocabulary words located on the last two pages of the Document Packet.  Students will write three to eight-sentence responses to each of the five essay questions.  When answering the questions, students should draw on notes taken during class on their “What the Doctor Ordered: Dr. Benjamin Rush Responds to Yellow Fever” Case Sheet as well as new insights gleaned from the letters in the Assessment Document Packet.  Remind students that, to get full credit for the assignment, they must turn in both the completed case sheet and the essay question answers.

Assess student responses on four criteria: 1) Use of complete sentences; 2) Correct grammar and spelling; 3) Use of unit vocabulary words; and 4) Extent to which students support their claims with evidence drawn from primary sources (both the Case Sheet and letters in the Assessment Document Packet).  Exemplary responses exhibit high comprehension of primary source content, ability to relate primary sources to contextual knowledge of the Yellow Fever epidemic, and empathetic insights into the plight of Philadelphia’s doctors and patients during the outbreak.

If class time allows following assignment completion, ask students to share thoughts about how they think they and their families might have reacted to Yellow Fever, if they had lived in Philadelphia in 1793.

Fever 1793 - A Film
Saving the Philadelphia Lazaretto: One of the Oldest Immigration and Quarantine Stations (1801-1895) - A Lesson Plan

Mathematical Practice: Reason abstractly and quantitatively. Construct viable arguments and critique the reasoning of others. Model with mathematics.Look for and make use of structure.

This unit was created in collaboration with the Library Company of Philadelphia.

This lesson was created by Alexander Ames, Education Intern, Historical Society of Pennsylvania