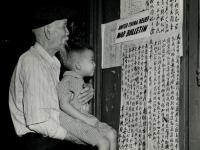 Even though English isn't the official language of the United States, knowing the language—or not—makes a difference in how someone navigates all the ins and outs of life in this country, from transportation to healthcare to civic engagement.

During this program we will consider how language acquisition affects life outcomes, both from our moderator, sociology professor Dr. Faye Allard-Glass of the Community College of Philadelphia, and from a panel of speakers:

Come early to see the document display Language, Immigration, and Assimilation. Refreshments will be served at the program’s conclusion.

A teacher workshop will be offered 5:30-8:30 the same evening that will enrich the program with suggestions for how to teach this subject in class.

This program is made possible through the generous support of the Connelly Foundation.