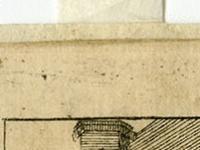 Digital Paxton: A Digital Archive and Critical Edition of the Paxton Pamphlet War for the first time collects in one open-source repository all surviving pamphlets, broadsides, political cartoons, and correspondence related to the Paxton incident and also serves as a web-based critical edition and teaching platform.

With the culmination of the Seven Years’ War in 1763, France ceded to Britain its claim on territories stretching from Quebec to New Orleans. Faced with the prospect of British expansion, a diverse coalition of native peoples launched preemptive strikes against forts across the trans-Appalachian west, known today as Pontiac’s War.

That December, armed settlers from the Paxton township exacted indiscriminate revenge. They murdered six unarmed Susquehannock in the Conestoga reservation, and 14 more sheltered in the Lancaster jailhouse. That January, they marched toward Philadelphia, where the government harbored 140 Moravian Indians. They were stopped in Germantown, six miles north of Philadelphia, by a delegation led by Benjamin Franklin, who persuaded their leaders to publish their grievances and disband the marchers.

Waged in pamphlets, political cartoons, broadsides, and correspondence, the ensuing pamphlet war featured some of Pennsylvania’s preeminent statesmen, including Benjamin Franklin, governor John Penn, and Hugh Williamson, who would later sign the U.S. Constitution. At stake was much more than the conduct of the Paxton men. Pamphleteers used the debate over the actions of the Paxtons to stake claims about peace and settlement, race and ethnicity, and religious conflict and affiliation in pre-Revolutionary Pennsylvania.

Digital Paxton for the first time collects in one open-source repository all surviving pamphlets, broadsides, political cartoons, and correspondence related to the Paxton incident. That archive includes previously unavailable materials at the project’s institutional sponsors, the Library Company of Philadelphia and the Historical Society of Philadelphia, as well as other regional archives including the American Philosophical Society, Haverford College Quaker and Special Collections, and the Moravian Archives of Bethlehem. Today, Digital Paxton features more than 1,600 free, open-source, print-quality images.