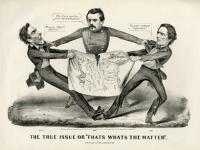 HSP is pleased to announce the launch of Politics in Graphic Detail: Exploring History through Political Cartoons, an exciting and innovative digital history exhibit featuring more than 125 cartoons digitized as part of the "Historic Images, New Technologies" (HINT) project.

The premier of "Politics in Graphic Detail" marks the end of a two-year project to enhance description and discovery of HSP's graphics materials and promote the linking and sharing of content among institutions and scholars. This project was funded by a grant from the National Historical Publications and Records Commission’s (NHPRC) Innovation in Archives and Documentary Editing program. The HINT project resulted in an update to HSP's digital image viewer and "Politics in Graphic Detail" is the exhibit that demonstrates the new viewer's capabilities.

Learn about the September 16, 2015 "Politics in Graphic Detail" launch event

In the course of developing the new image viewer, HSP digitized more than 500 political cartoons. Of those 500 cartoons, approximately 125 appear in "Politics in Graphic Detail."  Users can search for cartoons on specific topics, analyze individual cartoons in depth, and follow links between cartoons and related contextual material. The image tool will have a lasting effect on HSP's ability to manage and describe its digitized images and will make it easier for the public to access them. The overall objective is to make archival graphics easier for online users to find and encourage other repositories to adopt the new tools and practices.

"Politics in Graphic Detail" includes educational resources for teachers and students, as well as descriptive content that will be shared among the wider digital community on GitHub. Please see the "Editorial Method" section of "Politics in Graphic Detail" for more information about our shared data on GitHub.  In addition, the exhibit features essays from political cartoon historian Richard Samuel West and comic strip historian and blogger Allan Holtz. 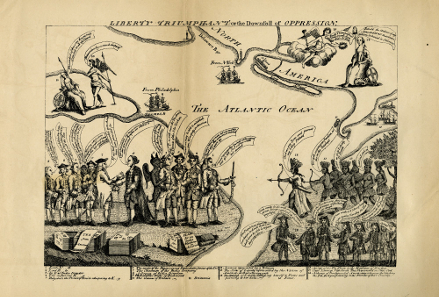 The cartoons featured in the project span American history from the colonial period through the Progressive Era and represent a wide array of topics and situations. Many of the cartoons portray well-known public figures like presidents and politicians, while others depict fictional or generic characters, such as Uncle Sam or figures embodying ethnic stereotypes. Reflecting the evolution of the political cartoon genre, the selected cartoons encompass a variety of visual styles, ranging from intricate scenes with a great deal of text to stark images with few or no words.

The cartoons were encoded in XML following Text Encoding Initiative (TEI) P5 guidelines. This enabled project staff to create "zones" on each image that, when clicked on by a user, display pop-up text containing editorial content and more information about the people, organizations, and events depicted. This encoding also includes Linked Open Data (LOD) relationships, which enhances the discovery of HSP's images and creates more opportunities for sharing data between HSP and other institutions.


This digital history project has been made possible by a grant from the National Historical Publications and Records Commission’s Innovation in Archives and Documentary Editing program.