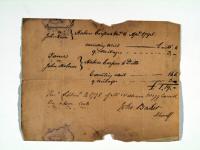 The cases below reflect the significance of the 1780 Act for the Gradual Abolition of Slavery in Pennsylvania. The act prohibited the importation of slaves into the Commonwealth of Pennsylvania and, due to their masters' violation of the new law and the PAS's lawyering, the individuals below were granted their freedom by the courts.

A former slave, Lett, is the beneficiary of a writ of Habeas Corpus and subsequently receives freedom.

"On motion & argument of Messrs Selby & Ward for the Commonwealth the within named negroes are discharged from their confinement, 31st July 1805."

"...Negro Bob may be charged...safe and secure conduct...before the Honourable George Bryan Esquire one of the  ~ Justices of our Supreme Court at his Chamber in the Northern Liberties of the City of Philadelphia..."

"...to Thomas Cullen of the City of Philadelphia shopkeeper We command you that the Body Susanna a negroe woman in prison under your Custody...may be charged in the same-under safe and secure Conduct...before the honourable George Bryan..."

"Nancy was my slave at the Island of Santa Cruz one of ye West Indies Islands in North America, that having Business to transact in the State of Pennsylvania I wandered hither with my family designing merely to sojourn for some time in the same State & not to become resident there...I put the said Nancy into a Boat...with Intent to send her back to…Santa Croiz..."

"Alexr Ewing of Little Briton Township Lancaster County within about 2 miles from Bald fryers Ferry – he moved into this State about 3 or 4 years & according to Law the following persons are free as Soon as the arrived into this State..."

"...Supposing that by their [the slaves] Residence since that time in Pennsylvania they had obtained a right of freedom I agreed with them as above mentioned and this is the Cause why I cannot have the same Negroes at the return of the said writ where it is Commanded me"

Two women, Cassandra and Lydia, were held in bondage in violation of the 1780 law. Questions regarding the owner’s residency as well as the proper protocol for registering slaves provided the legal justification to sue for freedom.

"...Phoebe for whom the above Habeas Corpus was obtained was a free Woman and that the Indenture by which she is bound can be of no further force than till her attaining the Age of Eighteen Years..."

The PAS attempts to intervene in the case of a newly freed woman's enslaved children.

"on inquiry the it was found that they could not prove their freedom  it was thought to bargin...for ther liberty which was done.  Gray was to pay 350 dollar for his liberty  Hanah 250 which is to be paid in 6 months..."