Becoming U.S.: Living in a City of Immigrants

Becoming U.S.: Living in a City of Immigrants 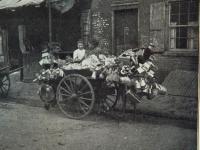 Ask anyone living in Philadelphia where they live and you’re apt to get a unique response. Places like Fishtown,  Strawberry Mansion, and Bella Vista are just a few of dozens of small neighborhoods that make up the larger city. Historically, these places became enclaves for incoming immigrant groups who found comfort by living together with those who shared the same culture and traditions. These groups helped shape their neighborhoods, helping to determine which businesses, organizations, and other areas were needed to best serve their community.

Although at times the neighborhoods seem static and unchanging, they really represent a complex and fragile spatial movement.  This can be seen especially when one generation leaves the area for a different or more prosperous one, or when two ethnic groups compete over the same spaces, often leading to displaced populations.

Join us for a discussion where we examine the impact of immigration on Philadelphia’s neighborhoods: how they were formed, how they’re changing, and what the future holds.   Come share your experience as a new or lifelong resident.

We will kick the discussion off by having panelists present some history about the challenges to neighborhoods.

Kostis Kourelis is an architectural historian at Franklin & Marshall College. His research focuses on the archaeology of migration in the Mediterranean and how architecture retains human stories that have disappeared from the historical record. He has studied medieval villages in Greece, Italy, North Africa, and Ukraine. Working with undergraduate students, he is currently mapping Philadelphia’s and Lancaster’s ethnic neighborhoods in the 1900s. He is also mapping the deserted villages and remittance architecture built by the Greek migrants back home. Current projects include a study of migrant housing in the oil fields of North Dakota and contemporary refugee camps.

Patrick Grossi is Director of Advocacy at the Preservation Alliance for Greater Philadelphia. A public historian and place-based advocate, he is committed to accessibility, thinking seriously about non-traditional methods of engaging the past, and the equitable and inclusive preservation of the built environment. He has previously worked with the Philadelphia History Museum at the Atwater Kent, Wyck Historic House & Garden, the Pennsylvania Horticultural Society, and Friends of the Rail Park, among others. Prior to joining the Preservation Alliance Grossi served as Project Manager of Temple Contemporary's Funeral for a Home.

Nikolaos Yiantsos is a founding Board Members of the Greek American Heritage Society of Philadelphia and President since March of 2013. His family immigrated to the Philadelphia area in September of 1971.  In the last nine years, Nick has been working with the US Navy automating the fleet with commercial off the shelf products.

Nick’s community involvement includes Vice-president and President of the Parish Council, St George Greek Orthodox Church, Media Pennsylvania. Chairman of the Strategic Planning Committee, Chairman of the Facility Committee. Nick is a longstanding member of the Pan-Macedonian Association of the USA where he served as a District Governor and Chairman of the Scholarship Committee and National Youth President. He also served as several posts including president of Pavlos Melas the Philadelphia Macedonian Chapter.

Rob Buscher - Festival Director of Philadelphia Asian American Film Festival, is a film and media specialist who has worked in many aspects of film including production, administration, and distribution. Due in part to his biracial Japanese American heritage, Robʼs expertise is Japanese and Asian American Cinema although he has worked as a professional film programmer and critic across a variety of genres. Some of his career highlights include co-founding Zipangu Fest - the UKʼs premier Japanese Film Festival, and creating the Japanese Cinema and Asian American Studies curriculum at Arcadia University. Rob also lectures at University of Pennsylvania and Fleisher Art Memorial, and is a contributing writer at Pacific Citizen and Broad Street Review.

Rob also serves as Vice President of the Philadelphia Chapter of civil rights group Japanese American Citizens League and chairs the national organization’s Strategic Planning Committee. His other board affiliations include PHLDiversity (the diverse meetings division of PHL Convention & Visitor’s Bureau) and Governor Wolfʼs Advisory Commission on Asian Pacific American Affairs, where he chairs a subcommittee called the AAPI Arts Collective of Pennsylvania.

HSP thanks our program partner, Southwest Air, the official airline of the Historical Society of Pennsylvania.