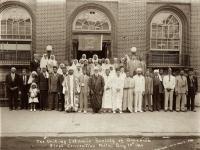 When Muslim slaves were brought into the U.S. in the 17th century from West African shores, one of their stops was Pennsylvania. And in the early years of the 20th century, as African Americans migrated from the South to industrial centers in the North, a number of Muslim immigrants and African Americans found common ground in their shared faith, Islam. They convened near Broad Street.

Many decades later, through waves of immigration and conversion, Islam and Muslims have become vital parts of the Keystone State's socio-cultural fabric.

This program will bring together Muslim American community members who have witnessed the state’s changing landscape: panelists will share their experiences and recount incidents that shaped their congregations and Muslim life in Pennsylvania, and a musical performance by Children of Adam, a Delaware Valley-based vocal and instrumental ensemble, will expand the program's focus to Pennsylvania’s soundscapes and explore Muslim influence on local music.

Sheikha Maryam Kabeer Faye is a teacher, speaker, and writer on Islam and spirituality. Born in a liberal Jewish family in Hollywood, California, Kabeer Faye lived in India, Nepal, and in monasteries in Europe before embracing Islam at the hands of an ancient Sufi Master. She has studied intensively with Sufi Masters in Senegal, Sri Lanka, and the U.S., and has received permission to teach in the Muridiyyah and Mustafawiyyah Tariqahs. She has described her deep journey of transformation in a memoir entitled Journey Through Ten Thousand Veils: The Alchemy of Transformation on the Sufi Path. Kabeer Faye lives in Overbrook near the Bawa Muhaiyaddeen Fellowship Mosque.

Samia Malik is a naturalized American citizen and a long-time resident of Harrisburg/ Mechanicsburg region. She has been a community activist and a champion of social justice issues across Pennsylvania. She developed and conducted a series of lectures on Islam in several institutions including the Fredricksen Library, Women’s Interfaith Symposium, Messiah Lifeways, and many other groups. She received the President’s award for her work with the group Community Relations and Criminal Justice where she developed and conducted sensitivity training to all criminal justice groups including the local police force. Malik led the graduation processional for Harrisburg Area Community College as a torch bearer in 2016 and received the Peacemaker of the Year Award from the World Affairs Council in 2017.

Sarah E. (Jameela) Martin is a long-time resident of Pittsburgh. She earned her BS degree from Central State University and an M.Ed. in curriculum and supervision from University of Pittsburgh. Until her retirement, she worked as a school administrator with the Pittsburgh Public Schools. She is also a Fulbright Hays scholar and serves as the Executive Director of Muslim Women’s Association of Pittsburgh. She self-published three books and is currently working on Voices of Islam, a history of African American Muslims in Pittsburgh 1900-1978. Her recreational activities include international travel to African countries, reading and rock climbing.

Shaykh Anwar Muhaimin was born in Philadelphia, PA and left the city at the age of 11 with his family to formally study Islam in Saudi Arabia. He completed memorization of the Holy Koran and was bestowed the title of Shaykh from the Islamic University of Medina, Saudi Arabia, Department of Arabic Language, from which he graduated with a degree in Arabic literature in 1989. He holds a Masters of Art degree in Organizational Leadership from Gonzaga University. He currently serves as President and Executive Director of Quba Institute, a religious & educational non-profit in Philadelphia founded in 1949. Additionally, he is a founding board member of the Interfaith Center of Greater Philadelphia, a co-convener for Religious Leaders Council of Philadelphia, and serves on the Council of Islamic Organizations of PA. He resides with his family in Philadelphia.

Imam Kenneth Nuriddin was born and raised in West Philadelphia. Imam Nuriddin is a U.S. Army veteran and a former City of Philadelphia official. After working at Sister Clara Muhammad School, first as the Department Head for Arabic and Islamic Studies and later the Assistant Director of Education, he helped start the United Muslim Masjid and became their first Resident Imam. He was instrumental in the creation of programming within the Center for Community Partnerships at the University of Pennsylvania, where he also served as the Imam for the Muslim Student Association through the Office of the Chaplain. He continues to serve as a member of the Penn Religious Community Council. As the Resident Imam of the Philadelphia Masjid, he oversees one of the largest Mosques in the region.

The Children of Adam Music Collaboration is presented by Images of the Motherland: Interactive Theatre, a non-profit dedicated to expanding public awareness of African and American traditions and history through authentic presentations of drama, art, music, dance, culture, and storytelling. They will perform a hybrid of original instrumental and multi-lingual vocal music linked to Islamic culture, blending jazz, R&B, and world music rhythms.

Free for Friends of CAIR and HSP, $10 for general admission
REGISTER NOW