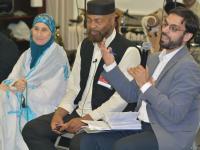 From concert halls to school corridors, from fire departments to fashion scene, from research labs to art studios and the TV screen, young American Muslims are confidently expressing their identities. They are also finding creative ways to counter anti-Muslim racism and conversing about critical issues that face their faith-communities and their country, all at once. In this conversation, held in collaboration with CAIR-Philadelphia, a number of young American Muslims from diverse backgrounds will think together and explore a meaningful path forward.

Husnaa Hashim is the 2017-2018 Youth Poet Laureate of Philadelphia. She is a first year student at the University of Pennsylvania. Husnaa has competed with the Philly Youth Poetry Movement, performed at various conferences and festivals, and received numerous Scholastic Art & Writing Awards, including a National American Voices Medal awarded at Carnegie Hall. Husnaa’s work can be found in RookieMag, KidSpirit Online, the Kenyon Young Writers Anthology, the Voices of the East Coast Anthology, and APIARY 9, among others. She is the author of Honey Sequence.

Nadirah Pierre is a 21-year-old New Jersey resident, Psychology major with a minor in African American Studies at Montclair State University, and, most recently, a social media sensation. She uses humorous wit and satire in order to shed light on issues that she faces in her personal everyday life as well as issues that are prevalent in the Muslim and African American communities. She fearlessly addresses real issues and says what no one else will.

Mohamed Bakry graduated cum laude from Rutgers, The State University of New Jersey, with a BA in Sociology and Criminal Justice. He obtained his JD from Temple University’s James E. Beasley School of Law in 2007. Mohamed joined the non-profit Defender Association of Philadelphia in 2007 and served as lead counsel in both bench and jury trials, from inception to resolution, in Philadelphia Municipal Court, Family Court and the Court of Common Pleas until 2012. Currently, Mohamed is a Senior Associate at Marshall Dennehey Warner Coleman & Goggin where he focuses a large portion of his practice on the defense of wrongful death cases within the areas of product liability, premises liability, and transportation, defending manufacturers, property owners, retailers, and product suppliers of all sizes against claims alleging assault and battery, defects on the premises, acts of negligent third parties, negligence or improper maintenance of the premises, negligent service, design defects, failure to warn, and breach of warranty. An active member of the volunteer community, Mohamed served on the Board of Trustees for the Nationalities Service Center from 2012 to 2017. Mohamed currently serves on the Board of Directors for the Lawyers’ Club of Philadelphia, a social and educational organization working to promote camaraderie among members of the bench and the bar in the Philadelphia area.

Madiha Irfan is a second-generation Pakistani American. Madiha grew up in West Chester, PA. She holds a BA in religious studies from Bryn Mawr College and MDiv from Harvard Divinity School. In her graduate studies, she focused on religious education and spiritual development in the American Muslim community. While studying, Madiha also completed extensive research projects and internships with various Islamic organizations across the country. She has an interest in language, with proficiency in English, Arabic, Urdu, Persian, and Spanish. Madiha started working as the Director of Religious Programming at the Muslim Society of Delaware Valley (MSDV) in July of last year. MSDV is a Muslim community organization that currently operates two Islamic centers: Muslim Youth Center of Philadelphia and Islamic Cultural Center of Willow Grove. Madiha enjoys serving the MSDV community, and especially loves working with youth.

Maryam Elarbi is a writer, photographer, and activist, who currently works as a project coordinator for GOOD Corps. She specializes in social impact media work, marketing and communications, and social media management. Maryam’s work is driven by a commitment to social justice, and prior to joining the GOOD Corps team, she worked with a number of non-profit organizations, including Invisible Children, WHYY, and Big Brothers Big Sisters Independence Region. Maryam and her work have been featured in a number of publications, including The Stanford Journal on Muslim Affairs, Complex, and The Washington Post. Maryam holds a BA in International Studies from Bryn Mawr College and is based in Philadelphia.

Mimi Hadi currently serves as the President of CAMP (Council for the Advancement of Muslim Professionals) - Philadelphia chapter. She earned a B.A. in English from Wittenberg University and is a graduate of The Pennsylvania College of Optometry where she completed a BS in Visual Sciences and a Doctor of Optometry degree. Since completing her doctorate, she has worked as an optometrist in both private practice and commercial settings, including Eye Care Centers of America (ECCA) and also National Vision (NVI). She currently works for Regional Vision Consultants, an affiliate of NVI In NJ, and has served on the NVI clinical panel and as a mentor OD. In her spare time, Mimi enjoys the outdoors, parasailing, traveling, and volunteering for the local Lions Club, and has served as President of the Gibbsboro/Voorhees NJ Lions Club from 2014-2016.

Razin Karu is a third-year student at Temple University majoring in History and Political Science with a minor in Global Studies. He was born and raised in India and immigrated to the U.S. in 2013. Previously, he attended the Bucks County Community College (Class of 2017) where he founded the Bucks MSA and Bucks College Democrats and was elected as the Student Government President 2016-17. Razin is a recipient of the Bucks President’s cup 2017 and Bucks Student Commencement Speaker 2017. He currently works for NextGen America, a progressive political organization.

Shuaiyb Newton is an Assistant District Attorney in the Philadelphia District Attorney’s Office. He prosecutes homicides that occur within the city and county of Philadelphia. He has worked as an ADA for approximately 7 years prosecuting crimes such as robberies, burglaries, and aggravated assaults. He was born and raised in Philadelphia. He attended the Philadelphia public schools and attended Temple University for his undergraduate studies. In his spare time, Shuaiyb acts as an emcee for various Muslim organizations in and around the Delaware Valley.