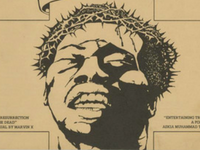 20th century
Historical Society of Pennsylvania
1300 Locust Street
19107 Philadelphia , PA
See map: Google Maps
Pennsylvania
Not just for entertainment, music, movies, and even comic books often reflect and address real societal issues. Guest speakers will explore the political role of art during one of the most turbulent periods of the 20th century.  The panel discussion will be followed by a musical performance featuring songs from the era.

Dr. Christina Larocco is editor of the Pennsylvania Magazine of History and Biography and scholarly programs manager at the Historical Society of Pennsylvania. She researches, writes, and speaks about women’s history and the history of social movements.

Dr. Ralph Young is a history professor at Temple University. He is the winner of several major teaching awards including the Provost’s Award for Innovative Teaching in General Education, the College of Liberal Arts Distinguished Teaching Award, Honors Professor of the Year, and most recently the prestigious Lindback Foundation Award for Teaching Excellence. His book, Dissent: The History of an American Idea, a narrative history of the United States from the standpoint of dissenters and protest movements, was a finalist for the 2016 Phi Beta Kappa Ralph Waldo Emerson Award. He is also the editor of Dissent in America: Voices That Shaped a Nation, a compilation of more than 100 documents by American dissenters. He is the founder of the weekly campus-wide “teach-ins” at Temple University in which students and faculty investigate the historical context of controversial contemporary issues. Dr. Young’s writings have appeared in such publications as The New England Quarterly, USA Today Magazine, the History News Network, and in blogs for the National Constitution Center, Salon, and Truthout.org.

Dr. Robert Kodosky joined the history department  of West Chester University in 2002 after teaching high school social studies in Philadelphia, PA (1989-2001). He serves as the faculty advisor to the Student Veterans Group and Phi Alpha Theta (history honors). He additionally acts as the Eastern Pennsylvania regional coordinator for Phi Alpha Theta and accepted an invitation to serve on Phi Alpha Theta’s national council (2015). For his work with military veterans, on campus and off, including the oral history based initiative Soldiers to Scholars that he co-founded and directs, Dr. Kodosky received the Legion of Honor Humanitarian Award granted by the Four Chaplains Memorial Foundation (2014). The author of Psychological Operations American Style: The Joint United States Public Affairs Office, Vietnam and Beyond (Lexington Books, 2007), Dr. Kodosky’s scholarship also appears in the Encyclopedia of Military Science, the American Intelligence Journal, The Routledge History of Social Protest in Popular Music, the Journal of Popular Culture, History: Reviews of New Books, the Michigan War Studies Review and H-War.

The Fabulous Philadelphia Mojo Kings Dance Band is one of the East Coast's top '50s and '60s, high energy, rock 'n' roll, funky, and soulful blues acts. The band leader, John Melinchock, has toured with Bill Haley's Comets, The Coasters, and The Platters, as well as his own Mercury Recording act Midnight Circus. He has shared the stage with The 1910 Fruit Gum Co., The Archies, Danny and The Juniors, Martha and The Vandellas, Lou Christie, The Marcels, Lynyrd Skynyrd, Rare Earth, Styx, Martina McBride, Billy Paul, The Brooklyn Bridge, and many, many more.

This event is presented as part of the series 1968: Civil Unrest and Civil Rights. Sign up for the full series and save! Registration is $20 for the three-program series and $10 for a single program; free for Friends of HSP.

Also in This Series

October 3: Behind the Marches
October 10: Protest in the Streets