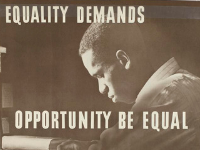 In the 1960s, Philadelphia citizens took action to spur change and ensure full civil rights for wider segments of the population. While usually we think of people marching with signs to make their voices heard, this program will focus on various ways people at that time made their desires and demands known.

Moderator Dr. Christina Larocco will lead a panel of historians and activists in sharing episodes from Philadelphia’s past that showcase a variety of civil rights movements as well as protest methods. Beginning in the early 1960s, selective patronage campaigns (or buying boycotts) were organized in Philadelphia. Dr. Clem Harris will explain how they provided the economic leverage needed to ask for fair employment and hiring practices. The Cecil B. Moore Philadelphia Freedom Fighters did carry signs—from 1965 to 1968, they marched to desegregate Girard College. Participant Karen Asper Jordan will recount the reason and results of this method. Likewise, activists also marched for gay rights from 1965 through 1969 in front of Independence Hall each July Fourth. Bob Skiba will explain how and why this demonstration led to expanded civil rights. Dr. Beth Kreydatus rounds out the panel discussing the women’s movement in the Philadelphia region during the 1960s, including protests at the Miss American competition of 1968.

Conversation about the protest movements—their successes and weaknesses—will lead to discussion of how the past provides fodder for the present. Was the civil rights battle won? What can we learn about effective ways of affecting change?

The evening will include a document display of items from HSP’s collections, especially the Thelma McDaniel Collection, a collection of collected fliers, newsletters, and related ephemera of the 60’s and 70’s.

Dr. Christina Larocco is the Editor of Pennsylvania Magazine of History and Biography and Scholarly Program Manager at Historical Society of Pennsylvania.  She researches and writes about women’s history and social movements of the 1900s.

Dr. Clem Harris is an Assistant Professor in the Department of History, where he teaches interdisciplinary courses in African American Urban History, African Diasporic History, and Public Affairs. Harris holds a Ph.D. in History, with graduate certificates in Urban Studies and Africana Studies received from the University of Pennsylvania in 2013.  His current book manuscript for the University of Pennsylvania Press, entitled: Reconstructing Philadelphia: The Persistence of Racism and the African American Struggle for Political Leverage and Civil Rights, is a case study that examines the roles of electoral and protest politics in the struggle for racial equality in the urban north from the Great Migration to the 1980s.

Karen Asper Jordan is a registered nurse who became immersed in the Civil Rights Movement of the 60's, as a teenager, under the leadership of Cecil B. Moore Esq.  She became a member of the Young Militants, an organization of young people who continued the fight against injustice and inequality. Decades later the light of activism remains as lessons learned are passed on to  those destined to walk in our footsteps.

Bob Skiba is archivist at the William Way LGBT Community Center and the President of the Association of Philadelphia Tour Guides.  He co-authored “Lost Philadelphia” and “Philadelphia Then and Now” and was curator of the exhibit “Speaking Out for Equality: The Constitution, Gay Rights and the Supreme Court.”

Dr. Beth Kreydatus, who has her Ph.D. in U.S. history from the College of William, teaches general education courses in the Department of Focused Inquiry at Virginia Commonwealth University, in Richmond, Virginia. She has just begun a term as the Faculty Development Coordinator for her department. Her research interests include the scholarship of teaching and learning, community engagement, and the history of mid-twentieth century American social activism.

This event is presented as part of the series 1968: Civil Unrest and Civil Rights.
Also in This Series
October 3: Behind the Marches
October 24: Arts and Entertainment