Documents and Drinks: The Jewish Collections at HSP

Documents and Drinks: The Jewish Collections at HSP 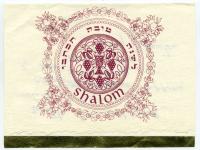 Join members of the Treasures Society and the 1824 Legacy Society for a lecture and document display featuring treasured items from HSP's large number of resources relating to the Jewish community in Philadelphia and beyond. Judith Guston, Curator and Director of Collections at the Rosenbach of the Free Library of Philadelphia, will speak about Jewish collections in Philadelphia as a general subject before delving into specific items in HSP’s own collection, including selections from a recent generous donation from the Jewish Genealogical Society of Greater Philadelphia of over 500 books, family histories, and research materials.

About our Guest Speaker

Judith Guston has been Curator and Director of Collections at the Rosenbach of the Free Library of Philadelphia for 16 years.  A graduate of Smith College (A.B. Classical Languages and Literatures), Yale University (M.A. Classical Philology), and the Winterthur Program/University of Delaware (M.A. Early American Culture), she is responsible for the care of the Rosenbach’s collection of nearly 400,000 objects and the oversight of the staff in research, interpretation, and registration.  She has curated or co-curated over 20 exhibitions during her tenure.  Ms. Guston curated the 2013 exhibition In the Beginning, which highlighted the three great Judaica collections of museum founder Dr. A.S.W. Rosenbach and the museum’s 2007 exhibition Chosen, which borrowed from eight area institutions to show Philadelphia’s wealth of great Hebraica. In addition Ms. Guston regularly offers a Hands-On Tour of early Hebrew books, which offers a close-up view of the Rosenbach’s stunning collection of Hebrew incunabula.

Highlights from the Jewish Collections of HSP

Jewish Petition to Dutch West India Company, January 1655 (Am.226). This document, requesting permission for Jews to travel and immigrate to New Netherland, is currently on loan for an exhibition in Holland. A digital image, translation, and historical notes are online as part of HSP's Preserving American Freedom Project, at http://digitalhistory.hsp.org/pafrm/doc/jewish-petition-dutch-west-india-company-january-1655.

Warrant of survey and plan for burying ground at Ninth and Spruce Streets, 25 September 1740(Penn family papers [Collection 485A], Volume NV-007, p. 39). This is an official document, from the Commonwealth and signed by Thomas Penn, authorizing the first Jewish burial ground in Philadelphia, which later became the cemetery of Congregation Mikveh Israel. Historically significant and visually appealing, especially since it includes a diagram of the original burial plot.

Autographs of prominent 19th-century figures born into Jewish families. HSP holds letters and other documents from figures including Heinrich Heine, Moses Mendelssohn, Felix Mendelssohn, Benjamin Disraeli, and Judah Benjamin. (Note that Heine, F. Mendelssohn, and Disraeli all converted to Christianity.) These are found in various collections, such as Dreer and Gratz.

Albert M. Greenfield papers (Collection 1959). Include documentation of Greenfield's involvement in a range of Jewish religious and charitable activities, including Congregations Mikveh Israel and Keneseth Israel, Federation of Jewish Charities, Young Men's Hebrew Association, and others. Of special note is a photo album of Mr. and Mrs. Greenfield's 1958 trip to Israel (Box 1057).

Rose I. Bender papers (MSS020). Documents Bender's activities in the Zionist movement before Israel's independence, including Hadassah, the Zionist Organization of America, and the World Zionist Congresses of 1939 and 1945.

Workmen's Circle, Philadelphia District records (MSS042 and MSS045). The Workmen's Circle is a Jewish fraternal organization that has promoted Yiddish culture and liberal (originally socialist) politics. The collection includes administrative and benefit records of one of organization's strongest regional centers, from the 1930s through the 1970s.

Joseph Paull papers (MSS044). Paull was a wholesale butcher in Philadelphia. The collection documents his work with a variety of community activities from the 1940s to the 1960s, including the Uptown Home for the Aged, work with prisoners at Eastern State Penitentiary, the Federation of Jewish Agencies, and other groups. A displayable sample is a flyer for a 1961 seminar at which Paull was one of the speakers on the topic, "Is the Yiddish language important to cohesion among the Jewish people?" (Box 2 Folder 2).

Shaindele di Chazante papers (Collection 3491). Papers of Jean Gornish, better known as Shaindele di Chazante, who was the first woman cantor in the U.S. and who performed both liturgical and folk music in concert and on the radio. The collection includes a number of posters, programs, clippings, and other printed materials.

Genealogical sources. Examples include Elite Directory of Hebrews and Directory of Jewish Houses of Worship, Charity Institutions, etc. of the city of Philadelphia, 1897 (UPA/Ph F 160.J5 E45 1897); L. H. Elmaleh, The Jewish Cemetery, Ninth and Spruce Streets, Philadelphia, which includes a list of names on tombstones (Ph 76A); and the Florence Kohn Abrahams genealogical research materials, 1898-1975 (Collection GSP020), which includes files on the Abrahams, Benjamin, Cohen, Moss, and Davis families, among others.