Portrait of a Woman in Silk with Zara Anishanslin

Portrait of a Woman in Silk with Zara Anishanslin 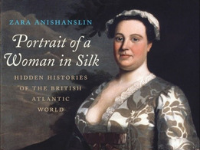 Arts and Culture
Historical Society of Pennsylvania
1300 Locust Street
19107 Philadelphia , PA
See map: Google Maps
Pennsylvania
This event will be rescheduled in Fall 2019. Registrants will receive a full refund. We apologize for any inconvenience!
Through the story of a portrait of a woman in a silk dress, historian Zara Anishanslin embarks on a fascinating journey, exploring and refining debates about the cultural history of the eighteenth-century British Atlantic world. While most scholarship on commodities focuses either on labor and production or on consumption and use, Anishanslin unifies both, examining the worlds of four identifiable people who produced, wore, and represented this object: a London weaver, one of early modern Britain’s few women silk designers, a Philadelphia merchant’s wife, and a New England painter.
Blending macro and micro history with nuanced gender analysis, Anishanslin shows how making, buying, and using goods in the British Atlantic created an object-based community that tied its inhabitants together, while also allowing for different views of the Empire. Investigating a range of subjects including self-fashioning, identity, natural history, politics, and trade, Anishanslin makes major contributions both to the study of material culture and to our ongoing conversation about how to write history.
About the Speaker
​Zara Anishanslin is an Associate Professor of History and Art History at the University of Delaware. Anishanslin specializes in Early American and Atlantic World History, with a focus on eighteenth-century material culture. She received her PhD in the History of American Civilization at the University of Delaware in 2009, where her dissertation won the prize for Best Dissertation in the Humanities.  In 2011, it also won the University of Pennsylvania’s Zuckerman National Prize in American Studies.
In 2014-15, Anishanslin was a Mellon Postdoctoral Fellow at the New-York Historical Society. In 2009-2010, Anishanslin was the Patrick Henry Postdoctoral Fellow in the Department of History at Johns Hopkins University. Additional fellowships include grants from the Omohundro Institute of Early American History and Culture, The Huntington Library, the American Antiquarian Society, Center for the Humanities at the CUNY Graduate Center, The Library Company, Harvard Atlantic Seminar, the Massachusetts Historical Society, the McNeil Center for Early American Studies at the University of Pennsylvania, Henry Luce Foundation/American Council of Learned Societies, and the Winterthur Museum.

Free for Friends of HSP; $10 General Admission
RESCHEDULED for Fall 2019