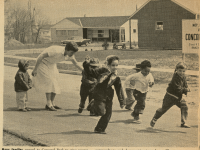 -Also known as the Constitutional Convention, held in Philadelphia form May to September of 1787.

-Delegates hoped to resolve recurring problems in governing the new country under the Articles of Confederation.

-Many of the delegates, including James Wilson from Pennsylvania, kept notes of the proceedings, speeches, and debates.

-You could research one of the many debates as a topic, or the Federal Convention as a whole; these sources are just a portion of our holdings on this topic.

-Greenfield was a real estate broker, prominent Philadelphian, and an active participant in city and national politics throughout his career.

-In 1948, both the Republican and Democratic National Conventions were held in Philadelphia.

-Albert Greenfield, as a leader of the All Philadelphia Citizens Committee, led the effort to secure Philadelphia as the location of both party's conventions in the same year.

-The Democratic National Convention is set to return to Philadelphia in June 2016.

-Morris Milgram, a civil rights and social activist, advocated for "racial harmony” by creating communities where black and white citizens had equal access to housing.

-In the 1950s, Milgram initiated his ideas by building two successful integrated communities in Philadelphia, Concord Park and Greenbelt Knoll.

-When he attempted to build outside of Philadelphia, in Deerfield, Illinois, the local government halted construction.

-Milgram reached out to advocates such as Eleanor Roosevelt and Martin Luther King, Jr.  His correspondences with them in HSP's collection show their support for his work toward integrated housing.

-Dora Kelly Lewis was a member of the National Women's Party, known for its "militant" tactics in the fight for women's right to vote.

-In July 1917, Lewis and others were arrested for displaying a banner outside the White House, which pointed out President Wilson's hypocrisy in fighting for democracy in WWI, when it was not fulfilled in the U.S.

-Lewis' exchanges with her mother and daughter reveal much about her role in the movement for women's suffrage.