Farsightedness Found in Draft of America's Much-Maligned Articles of Confederation

Farsightedness Found in Draft of America's Much-Maligned Articles of Confederation 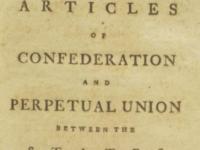 “The name of the Confederacy shall be the United States of America.” And with this polite introduction began the draft of America’s first constitution, the Articles of Confederation.

Ratified on this day in 1781, the Articles are remembered as a complete failure (when they are remebered at all) – a misstep along the path towards the US Constitution.

The initial draft of the Articles, however, contains several farsighted provisions absent from the final document. Many - including protections for vulnerable minority groups, religious dissenters, and Native Americans - were not adopted by Americans for years or centuries to come.

To resist the British more effectively, Americans first began contemplating uniting the colonies under a single charter in 1775. Hope for reconciliation with King George tabled the initiative, fearing the Crown would interpret the move as a de facto declaration of independence.

It was not until the spring of 1776 that John Dickinson – one of the foremost legal minds of his time and author of Letters from a Farmer in Pennsylvania – began drafting a governing document.

Unlike many of his countrymen, Dickinson sought to establish a strong central government to act as a guarantor of religious toleration and other individual rights.

Dickinson’s draft also contains the first known use of gender-inclusive language in an Anglo-American constitution - something that would not make its way into many American state constitutions until the late-twentieth century.

In a sop to independent-minded states, the draft’s provisions for a strong central government were struck in successive revisions. The same fate befell the protections for minority groups and Native Americans.

Dickinson himself was unable to stump for his own first draft, having been sent with his battalion to fight in New Jersey. The Articles finally ratified on March 1, 1781, were a shell of Dickinson’s original.

The Revolutionary War ended in 1783 and with it the impetus for working together. The states’ became increasingly self-interested as the Articles proved unable to cope with the fledging nation’s myriad problems.

In the pantheon of Founding Fathers, Dickinson is lesser known due in part to his opposition to independence – he abstained from voting on and signing the Declaration of Independence.

While many may criticize this stance, Dickinson’s draft Articles demonstrate his inspired thinking. When reading his draft – held at HSP –  the question is begged: had his provisions not been removed, would the Articles have failed?

Dickinson's draft of the Articles of Confederation is available for free public viewing as part of HSP's newest document display, Independence Hall: Life, Liberty, and the Pursuit of Happiness.

Event
Independence Hall: Life, Liberty, and the Pursuit of Happiness