The End of the Civil War

The End of the Civil War 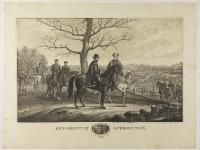 On April 9, 1865, in the village of Appomattox Court House, Virginia, General Robert E. Lee accepted the terms of surrender offered by General Ulysses S. Grant.  These transcriptions of a personal diary of an enlisted soldier and letters home by an officer, illustrate the various ways in which news of the surrender was preserved.

Fighting did not cease everywhere at once that day.  Another officer writes from Raleigh, N.C.of the fear the war would continue until the end of April.

After the War, Confederate soldiers had to promise not to take up arms again against the United States.  Thomas Drayton, a South Carolinian planter at the time  the Civil War  broke out, was commissioned a brigadier general by his old West Point classmate Jefferson Davis.   His pro-southern views set him against his immediate family, though who resided in Philadelphia, but they continued a correspondence.  (In a pre-Civil War letter between Thomas and his brother, who became an Union Naval office, Thomas foreshadows this rift.)

n these July, 1865 letters to his step-brother William Heyward Drayton, a lawyer in Philadelphia, Thomas discusses how he feels about having to take an oath of allegiance to the United States after the Confederacy lost the war as well as the poverty into which the war forced him.

(A pre-Civil War letter between Thomas and his brother, who became an Union Naval office is also available on our website.)