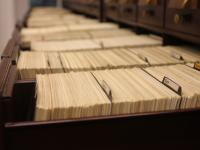 For the past 191 years, the majority of HSP’s manuscript collections – the bulk of its total holdings of over 21 million items – have been accessible only via a series of card files kept in the Reference Room. For researchers unable to visit the Library and Archive at 1300 Locust Street in the heart of Center City, Philadelphia, theses letters, diaries, scrapbooks, are “hidden,” i.e. not findable online.

Now, thanks to HSP’s collaboration with FamilySearch, the process has begun to make this information to researchers across the country and around the world.

The card catalog’s organization on FamilySearch’s database mirrors its physical organization. Card files are separated into separate sections for manuscripts, broadsides, graphics, maps, sheet music, Afro-Americana, family history resources, and newspapers. Included below is a description of these categories to aid users in their research.

Manuscripts, which librarians and archivists generally consider a handwritten or otherwise unpublished document, are principally text or musical notation on paper. Typewritten documents are typically classified as manuscripts but are more accurately described as typescripts.

This catalog is a name index to the Library Company of Philadelphia (LCP) manuscript collections. HSP administers these collections according to a cooperative agreement with LCP. LCP is adjacent to HSP on the 1300 block of Locust Street, making for a history-filled block of Center City, Philadelphia.

A broadside is a large sheet of paper printed on a single side only, with many historical broadsides including posters and advertisements. Many broadsides were created for a specific purpose, such as promoting a public event, with the intention of then throwing away. Luckily, many of these ephemeral items have been collected and preserved by libraries such as HSP, offering a glimpse into the media consumed by Americans throughout history.

When librarians and archivists discuss “graphics,” they are referring to a broad class of materials primarily consisting of image-based (rather than text-based) records. These often include architectural, engineering, or artistic works, and may be drawings, designs, prints, paintings, photographs, sketches, or other media.

The Graphics (PC4) catalog is best thought of as a series of smaller catalogs, ranging from A through D. Each of the four sections contains different types of images:

HSP’s collections of sheet music and other musical works capture the operas, librettos, psalms and hymns, popular and patriotic songs, jazz, and other music from the soundscapes of American history.

The Afro-Americana (PC6) catalog contains information on the Afro-Americana collections of the Library Company of Philadelphia (LCP) and the HSP for the period of 1553-1906. The catalog is divided into three categories: broadsides, manuscripts and prints.

Thematically, the Afro-Americana collection documents the West's discovery and exploitation of Africa; the rise of slavery in the New World along with the growth and success of abolitionist movements; the development of racial thought, including political protest and resistance to racism; descriptions of African American life -- slave and free -- throughout the Americans; and slavery and race in fiction and drama. Also featured are printed works of African American individuals and organizations.

HSP is one of the most comprehensive and professional genealogy centers in the nation—and the largest in the Mid-Atlantic region. The Society collects genealogical materials from Pennsylvania and every other state east of the Mississippi River. However, its collections also cover pre-migration from Europe, the genealogical “stepping stones” across the Caribbean, and out-migration to Canada.

As the “first draft ofhistory,” American newspapers have preserved essential records and detailed accounts of the people, issues and events that shaped the nation for several centuries.

The Newspapers (PC8) catalog contains information on HSP’s collections of newspapers, which include some of the nation’s oldest titles as well as numerous ethnic titles from the Balch Institute of Ethnic Studies.


This project is made possible through the support of FamilySearch.