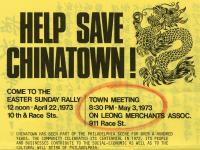 Pennsylvania’s importance to the founding of the United States is well known. Its importance to the growth beyond the nation's founding, however, is often overshadowed by the more-familiar stories of Ellis Island on the East Coast and Angel Island on the West. In fact, Philadelphia was a critical port of entry into the young nation and continued to act as a hub of immigration, with 1,300,000 people entering between 1815 and 1985. All those people carried with them stories, traditions, languages, and hope that were critical to the shaping of the nation. HSP's archives are an important point of access to these stories, largely in part due to the Balch Institute.

The Balch Institute was founded in 1971, with the mission of documenting the experiences of different ethnic groups in the United States. This collection encompasses and represents over sixty ethnic groups through holdings such as manuscripts, images, pamphlets, and more. The Balch Institute and HSP merged in 2002, and since then HSP has continued its legacy of collecting materials that document the history of various ethnic groups. This trove of sources is critical to understanding the history of immigration. But like most of history, it is hard to narrow into a single category, and the collection contains wonderfully illuminating sources relating to genealogy, family history, neighborhood history, political history, women's history, and labor history.

Mirroring the scope of the collections, the materials studied during the Institute will focus on Pennsylvania; however, these topics and stories are a microcosm of national history. Sources will include maps, land advertisements, diaries and letters of immigrants, drawings, governmental records, and political cartoons. Specific collections that might be featured include the Holy Redeemer Chinese Catholic Church records, the Shigezo and Sonoko Iwata papers, the New Immigrants Initiative records, and more.

Please check out this link for a brief history of immigration in Philadelphia, and see the scope of what this institute can provide!