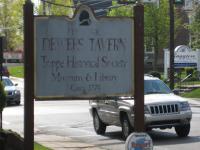 After the Declaration of Independence was adopted by the Continental Congress on July 4, 1776, the task still remained to actually tell the people of the American colonies what had been declared on their behalf. In Reading, Pennsylvania, the public reading of the Declaration of Independence was undertaken by Henry Vanderslice, the sheriff of Berks County. Vanderslice must have been eager to undertake the task, for soon after he would volunteer for the Revolutionary Army at the ripe old age of 51.

Henry was born in 1726 to Anthony and Martha (Pannebecker) Vanderslice, and trained to be a surveyor with his grandfather Hendrick Pannebecker (also the ancestor of Pennsylvania Governor Samuel W. Pennypacker). In 1774 he was appointed Sheriff of Berks County, and it was in that capacity that he publicly read the Declaration of Independence to the county on July 8, 1776. During the Revolutionary War Vanderslice served under General Muhlenberg as wagon master (in the equivalent of today's Quartermaster Corps), provisioning troops as far away as New Jersey and including Valley Forge. After the war Vanderslice returned to surveying, working as Deputy Surveyor and then Surveyor for Berks County. He died in 1797.

If you would like to learn more about Henry Vanderslice, you could read a transcription of his diary, 1777-1778, as it appears in the book "Van der Slice and Allied Families" by Howard Vanderslice (Los Angeles: Neuner Corp., 1931). But on a recent visit to the Historical Society of Trappe, Collegeville, Perkiomen Valley, we learned something that Howard may not have known--Henry Vanderslice had more than one diary!

The journal of Henry Vanderslice at the Historical Society of Trappe, Collegeville, Perkiomen Valley dates from 1777 to 1780. It has more in the way of accounts and receipts than personal reflections, but it is nonetheless an important accompaniment to the first diary. Plus, there is plenty of logistics data to pique the interest of Revolutionary War buffs!

There is a very special feeling of excitement and satisfaction that comes when a historic manuscript, locked away in someone's basement or attic for centuries, is suddenly discovered. That was how Pennsylvania German historian Arthur D. Graeff felt in the 1920s when he discovered the Vanderslice journals in the possession of "hermit antiquarian" George Von Nieda.* But my co-surveyor Michael and I experience an echo of that feeling when we come across an especially interesting manuscript tucked away in a small historical society. Although the journal is already safely housed and preserved in archival storage at the Historical Society of Trappe, Collegeville, Perkiomen Valley, we are thrilled to do our small part by helping to spread the word about this interesting resource through the HCI-PSAR project.

See all finding aids for The Historical Society of Trappe, Collegeville, Perkiomen Valley

I loved finding this article and the existence of another journal by my ggggg-grandfather, Henry Vanderslice!! I recently discovered that the other journal (1777-1778) is in the collection of the Gilder Lehrman Institute of American History in New York City. One thing I must correct Ms. Caust Ellenbogen on is that Arthur Graeff did, indeed, know about Henry's second journal! He mentions that detail at the end of his wonderful article written for the Historical Review of Berks County, April, 1937. That notation says, "The services of Henry Vanderslice as a wagon-master extended beyond the period of the Valley Forge encampment. He continued to transport supplies for the army until 1781. In 1779 he acted as deputy surveyor of Berks, and liquidated confiscated Tory estates. A SECOND DIARY COVERING HIS ACTIVITIES FOR THESE YEARS HAS BEEN FOUND AND IS BEING EDITED BY THE AUTHOR."

I have found just bits and pieces from transcripts of his journals. Do you know if there are full transcripts available?
Henry is my 6th great grandfather. So Phyllis, we must be cousins. I think I read where some Witmans participated in the Independance day / Henry Vanderslice celebration. I think that is wonderful that some of his descendants could be there there.
I've been planning a trip that way, and would like to vist the historical society and also find and see the "Liberty Bell of Berks" I don't know much about the area other than the history. I have several different revolutionary roots in and around Berks, with so much to see, I probably won't be able to see all that I'd like to. Vanderslice and Seitzinger history will be at the top of the list though. If you have any advice on historical societies in that area or historical attractions, I sure could use some suggestions. I have uploaded some Henry Vanderslice history on Ancestry.com. If you're on there maybe you can look me up.

I don't believe the Vanderslice journal at Historical Society of Trappe, Collegeville, Perkiomen Valley has been transcribed. If you'd like to see it, be sure to contact the Society in advance (with as much notice as possible) so they can prepare for your visit. Email info@trappehistoricalsociety.org or call 610-489-7560.

If you're looking for more historical societies and sites in the area, I encourage you to peruse the map of small history organizations that have participated in the HCI-PSAR project at http://hsp.org/hcipsar/map. Not all of them have regular public hours, so be sure to check their websites to see if you need to make an advance appointment to visit.

Henry Vanderslice was also my great grandfather a number of times back. I am descended down a straight male line, all Vanderslice until my mother. My mother's maiden name was Vanderslice. My grandmother, Amelia Cecelia Molineux married John Vanderslice in Kansas in the early 1900s. He died of pneumonia while my grandmother was still pregnant with my mother. There were four children now all passed. The Vanderlice name ended on this end because her brother and my grandmother's only son had two daughters and no sons. I have my grandfathers personal box with his name on it. My grandmother had a photo of them together and he was very blond. I hope I can find more personal information about this great, great, etc. grandfather, Henry Vanderslice.

Hi Renee, Thanks so much for your comment. It's always so exciting to hear from descendants of the people we write about in our blog posts. If you are interested in viewing the Vanderslice diary mentioned in this post, or learning if the Historical Society has any other information on Vanderslice, visit the Historical Society of Trappe, Collegeville, Perkiomen Valley's website at http://www.trappehistoricalsociety.org/, or for more information email info@trappehistoricalsociety.org or call 610-489-7560.

Good luck with your research,

Hi Phyllis, Thanks for that information! I'm happy to hear that Arthur Graeff had the opportunity to examine the very interesting second diary.

The Vanderslice Wagonmaster's Journal was digatized in 2012 and is available online. http://trappehistoricalsociety.org/vanderslice-journal/ Just click on the link "Vanderslice Journal on Google+".

Please add any transcriptions, notes, comments to the Google+ page for the benefit of others.

Thanks so much for posting this information! It's great that the Historical Society was able to digitize the journal and make it available to those who cannot visit your repository.