A Few Pope-ular Small Repositories to Consider This Weekend

A Few Pope-ular Small Repositories to Consider This Weekend

Like the rest of the city, the staff of HCI-PSAR is anxiously awaiting the arrival of Pope Francis in Philadelphia this weekend. In preparation for His Holiness, we decided to take a look back at some of the more spiritual collections we’ve encountered through the project. From Episcopal research centers to Jewish synagogues to Christian missionaries, HCI-PSAR has surveyed a slew of small repositories with religious collections the Pope might be interested in paying a visit to. Check out a few of them below! 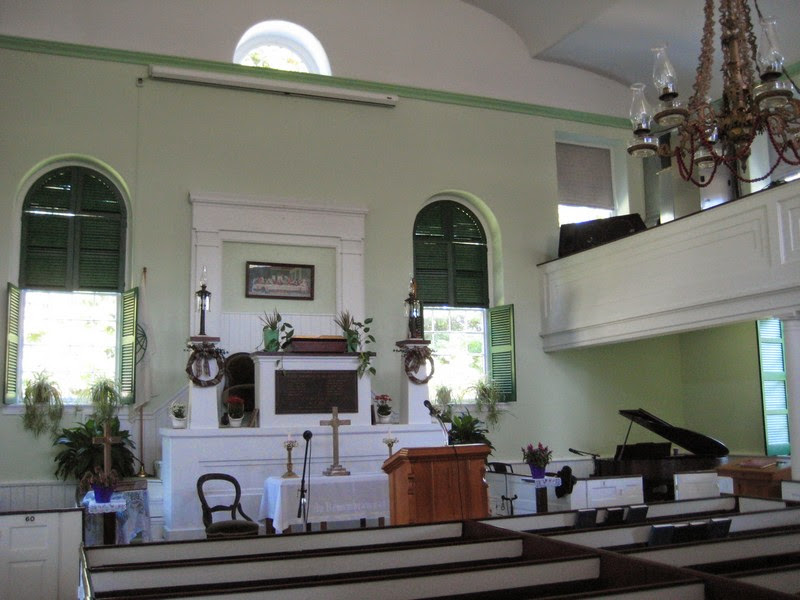 The Historical Society of the Eastern Pennsylvania Conference of the United Methodist Church holds over 200 linear feet of archival materials in a wide variety of formats dating from the late 18th century to the present. The Society is the repository for records of Eastern Pennsylvania Conference member Methodist and Methodist Episcopal churches when they close, and these closed church records comprise about half of the Society's holdings. The amount of records varies by church, but over one linear foot of materials is available for about 50 different churches. Approximately 100 other churches are represented by smaller amounts of material. Additionally, the Society holds some records of the Eastern Pennsylvania Conference and records from several preachers' and women's organizations within the Conference. The Society also holds small quantities of papers (less than one linear foot of materials) from various reverends, bishops, and other Methodists, including correspondence, diaries, religious commentary, sermon drafts, pastoral records, autograph books, scrapbooks, marriage certificates, deacons certificates, traveling connections, diplomas, district reports, printed engravings, Methodist historical notes, photographs and photograph albums, and other materials. Of special interest are documents from John Wesley, Francis Asbury, Thomas Coke, Joseph Pilmore, and Anna Jarvis. The records of St. George's United Methodist Church, dating from 1763 to the present, are also available on-site. 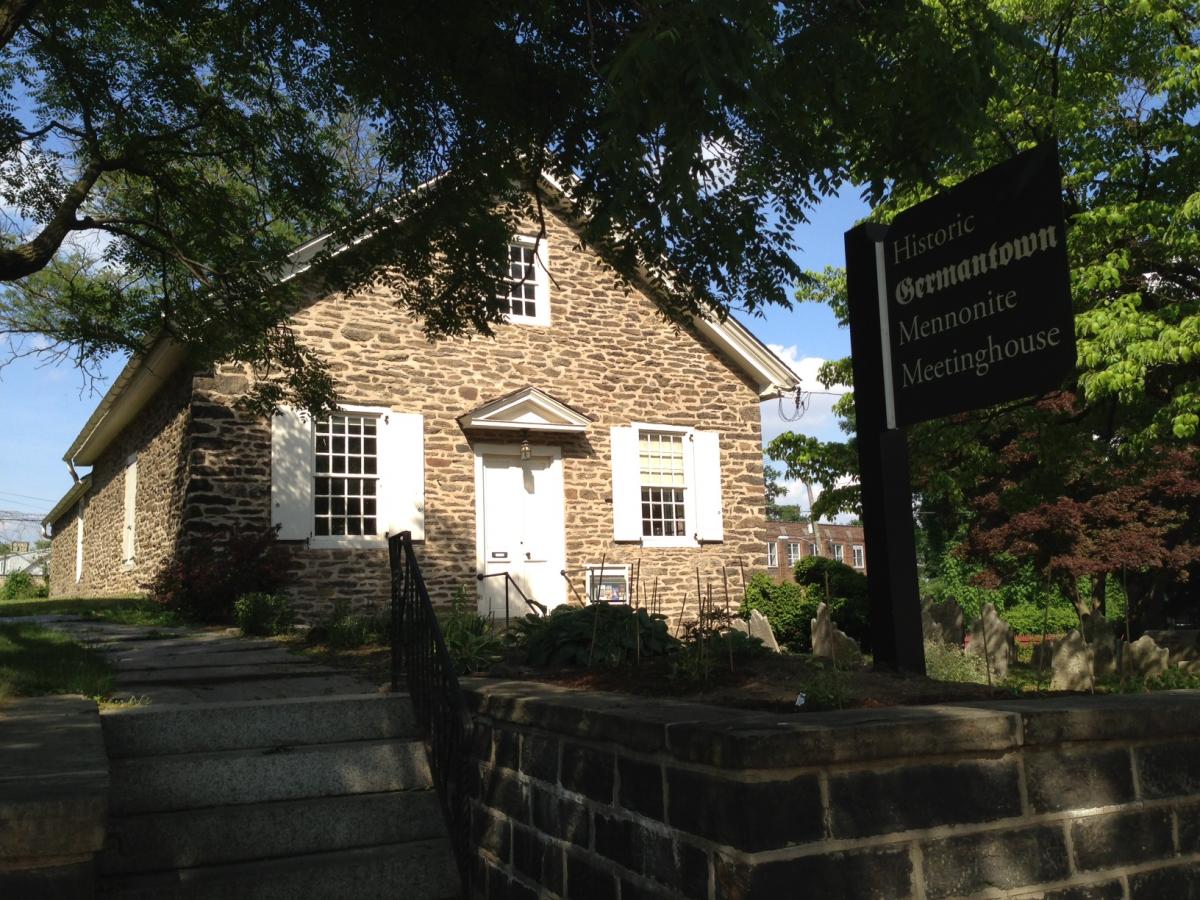 Historical Society of the African Episcopal Church of St. Thomas 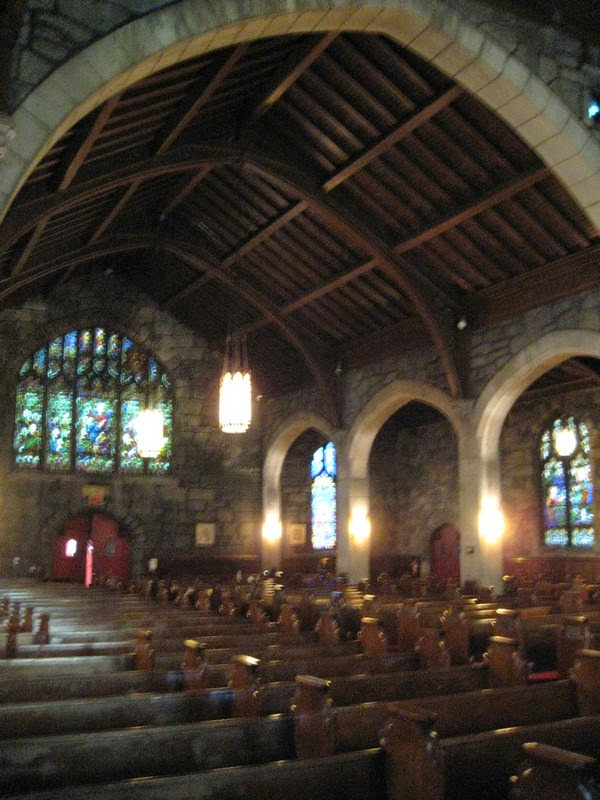 The Historical Society of the African Episcopal Church of St. Thomas was organized in 1982 to preserve, research, study, and communicate the history of the parish. Established in 1792 in Philadelphia, Pennsylvania by and for persons of African descent, the African Episcopal Church of St. Thomas is the first African American Episcopal Church in the United States. Its founder and first rector was Absalom Jones (1746-1818), the first African American ordained in the Episcopal Church. Records of the Church make up the vast bulk of the Historical Society's archival holdings -- about 50 linear feet of the total holdings of 60 linear feet. The church records, which date from 1790 to the present, consist mainly of original church records, as well as some accumulated secondary-source materials. The records also include photographs, audio-visual materials, printed materials, and objects. Additionally, the Historical Society is the repository of several collections of late 20th century materials compiled by prominent church members, primarily documenting church operations, commemorations of Reverend Jones and the church's history, and African American Episcopalians. 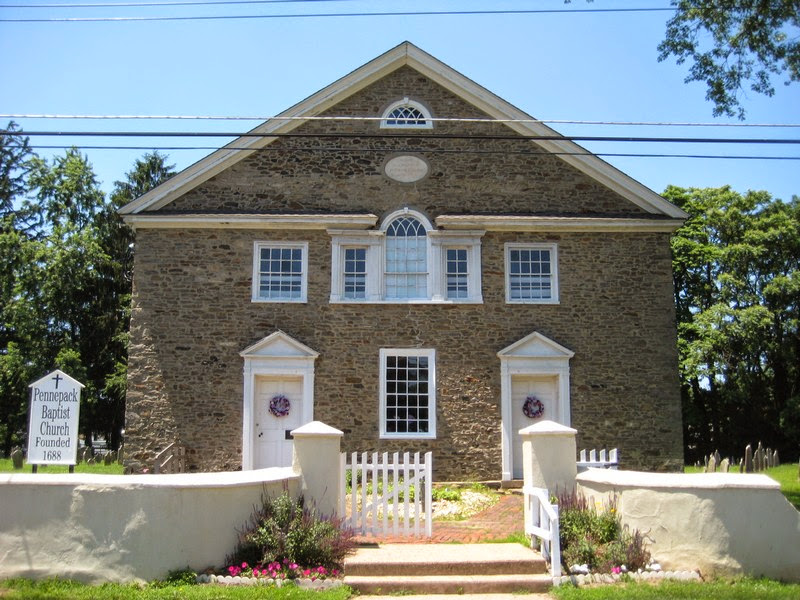 Pennepack Baptist Church, established in 1688 in what is now Northeast Philadelphia, Pennsylvania, is the oldest existing Baptist church in the state and one of the oldest in the nation. Pennepack Baptist Church Historical Foundation was established in 2010 to preserve the Church and promote its history. The Foundation maintains an small amount of archival materials, including church records such as administrative volumes, cemetery deed certificates, legal papers, and late nineteenth and early twentieth century photographs; scrapbooks compiled by church historians consisting of photocopied, printed, and some original documents dating from 1844 to the present; and newspaper clippings, genealogy and other materials. The church's earliest records are on deposit at the American Baptist Historical Society (Atlanta, GA). 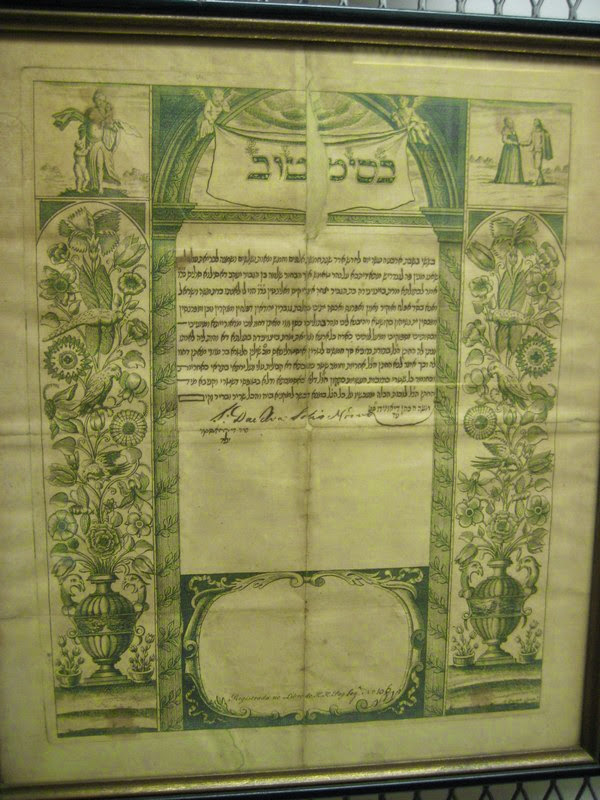 Congregation Mikveh Israel is the oldest formal Jewish congregation in Philadelphia, Pennsylvania, and one of the oldest continuous synagogues in the United States. Nicknamed “Synagogue of the American Revolution,” Congregation Mikveh Israel traces its roots to 1740. Following the Sephardic tradition, Mikveh Israel has counted among its members many prominent individuals who have contributed to the development of Jewish life in Philadelphia and the United States. The archival holdings of Mikveh Israel consist of 120 linear feet of materials spanning 1765-2011, and contain a large quantity of membership and vital records and extensive papers from several former religious leaders and synagogue presidents, as well as administrative and financial records, photographs, publications, and ephemera. Many prominent Jews affiliated with Mikveh Israel, of renown in the local Philadelphia or national or international Jewish communities, are documented in the collection, including Rebecca Gratz  and other members of the Gratz family, Rev. Isaac Leeser, Moses Aaron Dropsie, Rev. Sabato Morais, Judge Moyer Sulzberger, Dr. Solomon Solis Cohen, Cyrus Adler, Rev. Leon Haim Elmaleh, and Dr. A.S.W. Rosenbach. 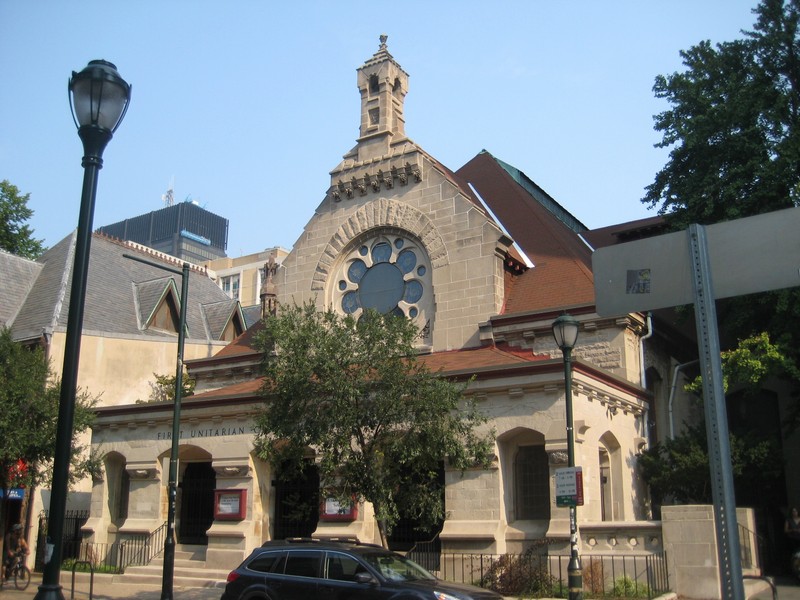 The First Unitarian Church of Philadelphia was established in 1796 as the First Unitarian Society of Philadelphia and is the first continuously functioning church in the United States to call itself “Unitarian.” The church was established with the help of Joseph Priestly, best known as the father of modern chemistry, and would later become the church of many notable individuals, including abolitionist  minister Reverend William Henry Furness; his son, architect Frank Furness; African American poet, author, journalist, and activist Frances Ellen Watkins Harper, known as “the mother of African American journalism;” abolitionist and educator Laura Matilda Towne, who traveled to South Carolina during the Civil War and opened the first school for freedmen, Penn School, in 1862 on St. Helena Island; and actor Kevin Bacon. The church is a Unitarian Universalist congregation and identifies as “an intentionally diverse community that affirms and promotes Unitarian Universalist principles.”  They aim to foster peace, sustainability, and justice in the community, city, and world. The church is currently located in a building designed by Frank Furness in the Filter Square neighborhood of Center City, Philadelphia. In addition to housing the Church, the building includes a community center and also serves as a music venue and childcare center.

The Church’s records, 1796-circa 2000s, include administrative and financial records, church registers listing vital records (births, marriages, and deaths), correspondence, history materials, and other materials related to the First Unitarian Church of Philadelphia, as well as papers of the Church's first minister, William Henry Furness, and other ministers and individuals associated with the Church such as Joseph Priestly, John Vaughn, Anders Lunde, Ella Wister Haines. The collection also contains photographs, audio and video materials, scrapbooks, and newspaper clippings. Topics addressed in the collection include a number of social justice causes such as the abolitionist movement and the AIDS crisis. The papers of former Church member, historian, and history professor, Dr. Elizabeth M. Geffen documenting her research and publications relating to the Church, Unitarianism, and Philadelphia are also part of the collection. 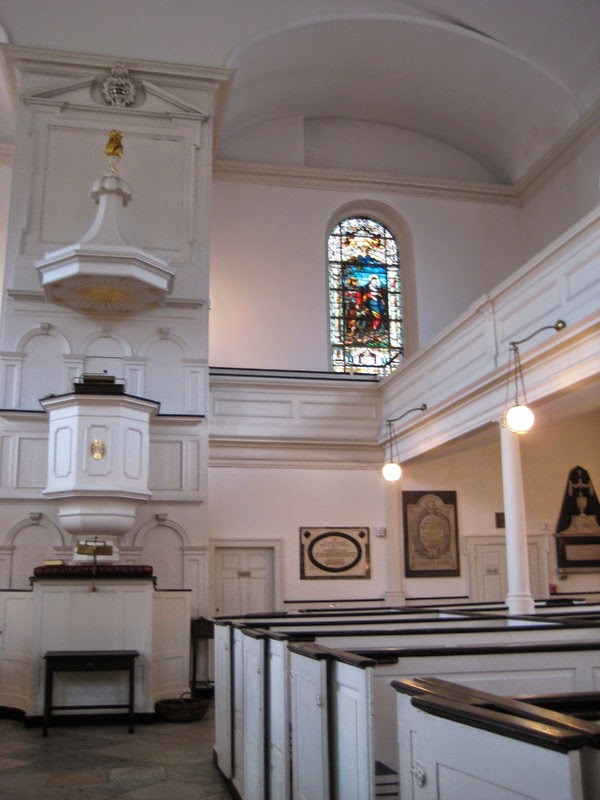 St. Peter's Episcopal Church in Philadelphia, Pennsylvania was established in 1758 as an off-shoot of nearby Christ Church; it became an independent entity in 1832. St. Peter's church building, which held its first service in 1761 and still hosts St. Peter's services as of 2014, was designed by well-known architects Robert Smith and William Strickland, and sculptor William Rush contributed to its interior. Many prominent Philadelphians have been associated with the church, including artist Charles Willson Peale and Vice President George Mifflin Dallas, both of whom are buried in its graveyard. Most of St. Peter's records predating 1832 are stored at Christ Church, but St. Peter's maintains its post-1832 records, and a few items from the late 18th and early 19th centuries, in an on-site archives. Included in the archives are minutes of the vestry, parish registers and records of service, accounting and financial records, deeds, blueprints, photographs, sound recordings and other records of St. Peter's Church. In addition, there are materials from parish organizations and affiliated organizations. 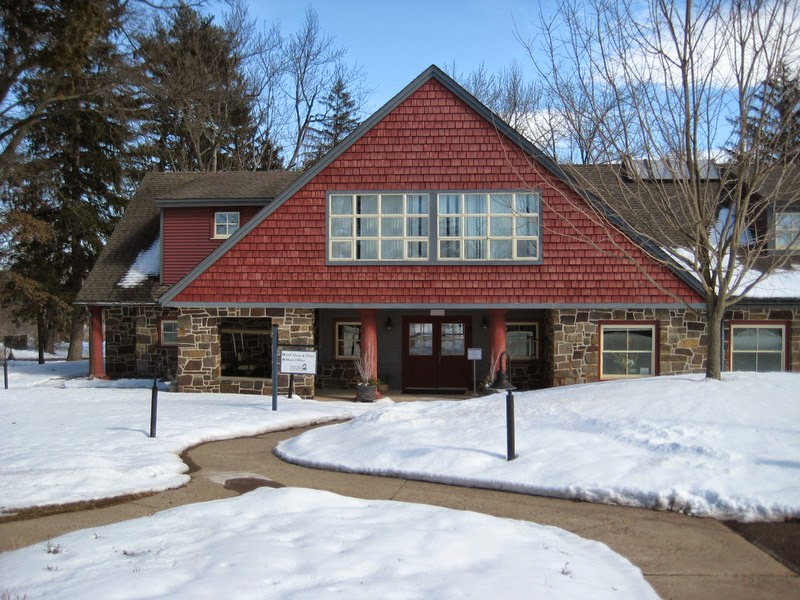 In 1964 the Pearl S. Buck Foundation was organized by American author and humanitarian Pearl S. Buck (1892-1973) to provide support to children in Asian countries who were not eligible for adoption. In 1999, the Foundation changed its name to Pearl S. Buck International (PSBI). As of 2015, PSBI strives to support cross-cultural understanding and appreciation, enhance the quality of life for children around the world, and promote Pearl S. Buck's legacy by preserving and interpreting Green Hills Farm, her home in Bucks County, Pennsylvania.

The collections at the Archives at Pearl S. Buck International relate not only to her life and organization, but also include the papers of other individuals and missionaries. The Archives at Pearl S. Buck house the photographs, letters, and postcards of Jacob and Emily Peat, Methodist missionaries who served in China and Sumatra from 1896-1944. There are also photograph scrapbooks and a diary of Edythe M. Flower, a Presbyterian Church missionary in China from 1920-1926.

Of course, these are only a few of the religous repositories and collections we've encountered. To see more of the places we've visited and learn about thier collections, visit the PACSCL finding aid website and click around! You can also learn more about repositories by keeping up to date with this blog, Archival Adventures in Small Repositories.