Biddle Records at Andalusia? Bank on It!

Biddle Records at Andalusia? Bank on It! 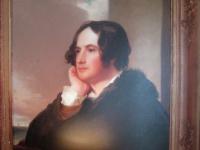 Nicholas Biddle (1786-1844), best known for serving as Director of the Second National Bank of the United States, acquired the Bucks County (Pa.) property "Andalusia" from his parents-in-law 200 years ago, in 1814. Today, the house museum is open for tours and also serves as the repository for about 70 linear feet of Biddle family papers. If you are researching the Biddles or any of the innumerable arenas with which their lives intersected, you can bank on finding the archival resources you need there.

The Biddle family in America begins with William Biddle (1630-1712) and Sarah Kempe (1634-1709), British members of the Religious Society of Friends (Quakers) who moved to New Jersey in 1681. Their grandson, William Biddle, III (1698–1756), relocated to Philadelphia in the 1720s/1730s. His son, Charles Biddle (1745-1821), is the first Biddle documented in the papers at Andalusia. He served in Pennsylvania government with Benjamin Franklin, was buddies with Aaron Burr, and in 1791 was appointed Prothonotary of Philadelphia County. 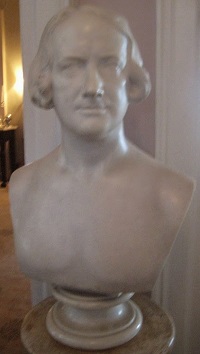 Charles Biddle's son, Nicholas Biddle (1786-1844) (pictured above and right), is today probably the best known of the clan. In his time he was one of the most prominent men in America, noted for his leadership in finance and his skill at extending diplomatic goodwill on behalf of the young nation. He lobbied for rechartering the Second National Bank of the United States and directed the bank for most of its existence. As such, he was President Andrew Jackson's primary adversary in the so-called "Bank War." Jackson is famously quoted as saying, "The Bank, Mr. Van Buren, is trying to kill me, but I shall kill it!" Biddle countered, "This worthy President thinks that because he has scalped Indians and imprisoned judges, he is to have his way with the bank. He is mistaken." Jackson prevailed in the end, of course; the bank failed in 1841.

Nicholas Biddle's papers at Andalusia feature numerous account books, letters and documents relating to the Second Bank of the United States, as well as to banking more generally. 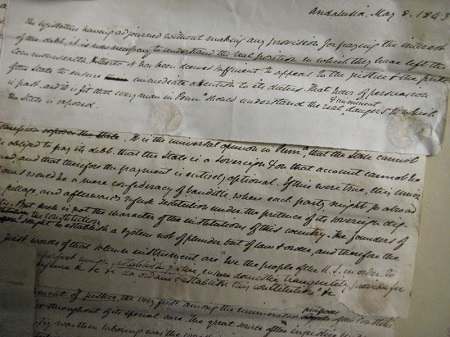 Document written by Nicholas Biddle at Andalusia, May 8, 1843. "The legislature having adjourned without making any provision for paying the interest of the debt, it is now necessary to understand the real position in which they have left the commonwealth..."

Nicholas Biddle was a well-connected member of high society, who between Andalusia and his Philadelphia house entertained the likes of President John Quincy Adams, Daniel Webster, the Marquis de Lafayette, and Joseph Bonaparte, the former King of Spain. His interests included poetry, science (he was the editor of the Lewis and Clark Journals), architecture and art, and experimental farming (he imported the first herd of Guernsey cattle into the United States).

Nicholas Biddles' brother, Commodore James Biddle (1783-1848), is less of a household name but no less fascinating an individual. He served in the United States Navy for forty-eight years (1800-1848), travelling extensively in that time period and working in diplomatic and trade negotiations. He was a crew member of the ship that ran aground off the coast of Tripoli during the Barbary Pirate wars; the crew's release after nineteen months imprisonment is the subject of the Marine hymn "to the shores of Tripoli." Commodore Biddle was awarded a medal and a sword for his exploits during the War of 1812.  Later, he was involved in arranging trade treaties with Turkey (1830) and China (1845). On the Commodore's final voyage he was accompanied by an artist, Edward C. Young, who illustrated scenes from Biddle's entire naval career. This sketchbook is one of the treasures at Andalusia. 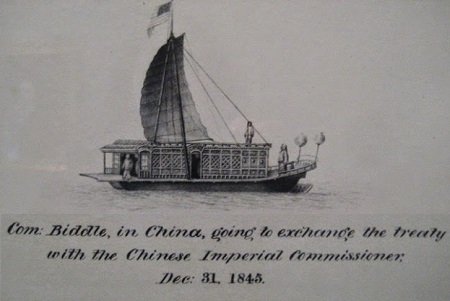 Illustration by Edward C. Young in Commodore James Biddle sketchbook, circa 1845-1848. "Com. Biddle, in China, going to exchange the treaty with the Chinese Imperial Commissioner. Dec: 31, 1845."

Commodore James Biddle is probably the best documented family member in Andalusia's collections. Aside from the sketchbook and some journals and loose papers, the core of the Commodore's papers is a set of documents, spanning 1798 to 1848, bound in the early 20th century into 16 volumes. Covering the full range of his time in the Navy, the volumes contain both personal letters and military related documents such as courts martial proceedings.

Andalusia's archival collections don't end with the Biddle brothers, however. There are many materials from the brothers' nephew, Charles Biddle (1857-1923), and his wife, Letitia Glenn Biddle (1864-1950), who with others founded the Garden Club of America in Andalusia's billiard room. The Charles and Letitia Biddle papers relate largely to gardening, other aspects of maintaining the Andalusia property, and family genealogy. Their son, Charles J. Biddle (1890-1972), is also strongly represented in the Biddle family papers at Andalusia. A large segment of his papers document his service in World War I. 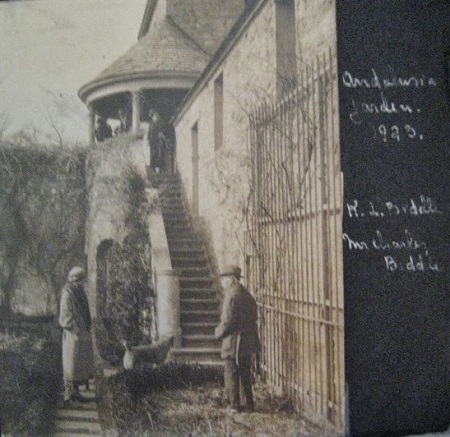 The materials from other Biddle family members and succeeding generations are too numerous to name here. Suffice it to say that if you are researching the Biddles, members of their extended social and political network, American finance or trade and diplomatic relations in the first half of the 19th century, any major American battle from the Barbary Wars to World War II, experimental farming, gardening, or  historic property administration--or myriad other topics related to Biddle family members--you can bank on finding useful archival resources at Andalusia.

The Andalusia Foundation's website is http://www.andalusiapa.org/ For more information, call 215-245-5479 or contact the site's Executive Director at chouchins@andalusiapa.org.