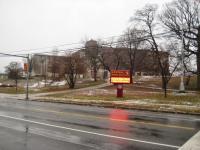 Philadelphia's Central High School is the second oldest continuously public high school in the United States. Chartered in 1836, its first building, located at Juniper and Market streets, opened its doors in 1838. The school has changed buildings three times (1854, 1900, and 1939) since then and is currently located in its fourth building at the corner of Ogontz and Olney avenues. Since 1849, Central has been allowed to grant Bachelor of Arts degrees to its graduates who have met the degree requirements. Today, Central is the only high school in the country with this ability. Students not pursuing a bachelor’s degree receive a high school diploma upon graduation. Another aspect of Central that is different from several other schools is that students and graduates refer to their graduating class not by the year in which they graduated (e.g. class of 2000), but instead by class number. The first graduating class in 1842 became class number 1 and this year’s graduating class will be number 274. If you're curious as to why the school has 274 classes, but has only been open since 1838, it's because with a few exceptions, graduations were held twice annually at Central until 1965. Since then, graduations have occurred only once each year. 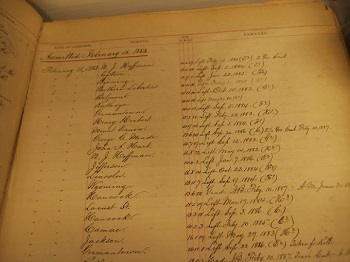 Enrollment list, 1883. The enrollment records show the name of the student, the father's name and occupation, place of residence, date of enrollment, former school name, age, and notes about when the student left or graduated from Central.

From its inception, Central has been known for its high academic standards. This tradition of academic excellence continues in the 21st century; when applying for admission to the school, students must meet various admissions requirements, which include maintaining a certain grade point average and achieving a particular score on a city-wide standardized test. From 1838 until the summer of 1983, only boys were admitted to Central. After a federal court ruling, six girls were admitted in September of 1983. 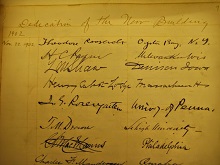 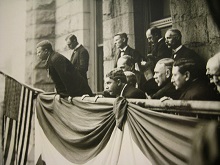 President Theodore Roosevelt's signature in a Central High School visitor book (left), and an image of him speaking at the dedication of the school's third building (right), 1902. Three signatures below Roosevelt's is that of his close friend and confidant, Henry Cabot Lodge, United States Senator from Massachusetts.

In addition to its noted alumni, Central has had several famous visitors pass through its halls. President Theodore Roosevelt visited on the occasion of the formal dedication of the school’s third building in 1902 and addressed the students. The Archives of the Associated Alumni of the Central High School of Philadelphia is located in Barnwell Library at Central High School and has a visitors’ book in its archival collection that contains the signatures of routine visitors as well as various prominent visitors to Central including United States presidents James K. Polk and Theodore Roosevelt, United States senator Henry Cabot Lodge, Philadelphia Mayor Richardson Dilworth (a Central graduate), and many others. 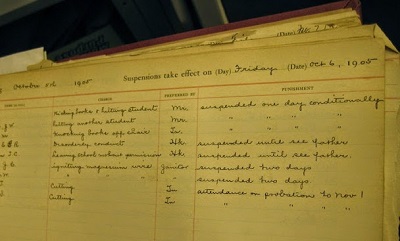 Committee on Discipline suspension book showing the date, infraction, and punishment, 1905. It seems students in the early 20th century were not so different from students today; the offenses include hitting other students, knocking books off of chairs, and skipping class. Two boys received a two-day suspension for igniting magnesium wire.

If you are interested in learning more about Central High School or researching individuals who went there, I highly recommend checking out other materials in the archives, which include records of the school and its alumni association and a subject file. The Central High School of Philadelphia records, 1838-2014, consist of enrollment records, faculty minute books and lecture notes, a number of complete (or near complete) runs of school and student publications, a large amount of photographs, a suspension book from the school’s Committee on Discipline, and various other materials. The Associated Alumni of The Central High School of Philadelphia records, circa 1860-2014, consist of administrative and financial records, several scrapbooks with newspaper clippings and ephemera related to the school and some of its individual graduates, various alumni publications, and additional materials. The subject files, compiled by Central’s alumni association, consist of a mix of primary and secondary-source materials relating to the faculty and administration including school presidents, alumni, distinguished visitors, and other topics. A portion of this collection has materials relating to every graduating class, organized by class number.

Actor/rapper Will Smith used to perform at CHS parties with his pal DJ Jazzy Jeff when I attended in the 80s.

Thanks for reading our blog and enhancing our list of notable alumni/visitors of Central High School. What a great experience it must have been to see Will Smith and DJ Jazzy Jeff perform when you were in high school!

The Archives of the Associated Alumni of the Central High School of Philadelphia are located in Barnwell Library at Central High School. For more information about the archives or its collections, call 215-276-5262 or email centralhigharchives@gmail.com. You can "Like" the Associated Alumni's page on Facebook or follow its feed on Twitter for updates.