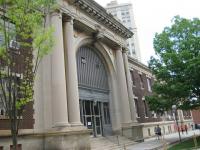 The 103rd Engineer Battalion of the Pennsylvania National Guard--nicknamed the "Dandy First"--is the oldest continuously-serving military unit in Pennsylvania, and one of fewer than ten organizations whose lineage goes back to before 1747 (as verified by the Center for Military History). Did you know that a museum dedicated to the lineage of this storied regiment is housed in the old armory building on the campus of Drexel University? I certainly had no idea until I was sent to survey their archival collection. I felt like I was the "Dandy First" person to visit!

The history of the First Regiment Infantry Museum is extremely complicated and convoluted, so I fear to go into much detail here lest I propagate an inaccuracy. In a nutshell: the regiment has fought in just about every major American war except Vietnam. Although the regiment's history formally begins with the establishment of the Artillery Batallion in Philadelphia in 1777 for the Revolutionary War, the regiment traces its lineage back to groups of men who met informally in Philadelphia even before Benjamin Franklin's 1747 militia. From 1747 to the beginning of the Revolutionary War, the regiment's predecessor was a Company of Artillery commanded by Captain Jehu Eyre. This unit was increased to battalion strength and became the Artillery Battalion of Philadelphia; Eyre was promoted to the rank of Colonel and commanded the unit until his death in 1781. The unit reorganized after the War of 1812 as the Volunteer Corps of Light Infantry, Washington Grays and in 1828 again reorganized as the Artillery Corps, Washington Grays. The famous statues outside of the Union League on Broad Street were monuments to the men of their regiment. 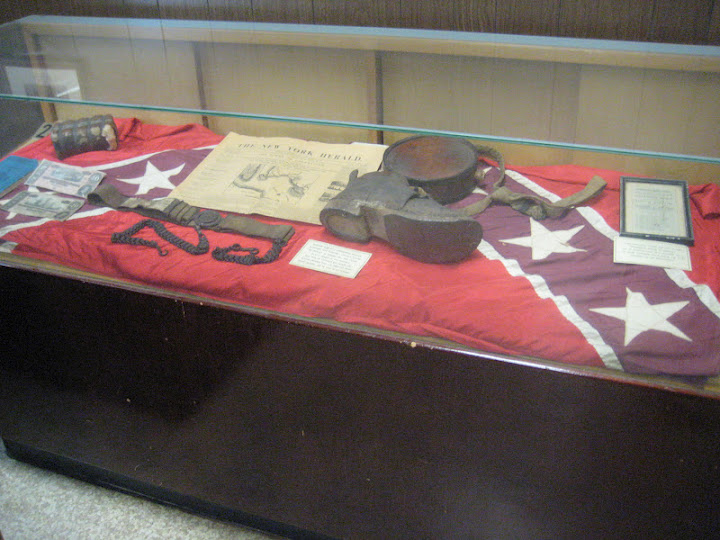 Just prior to the outbreak of the Civil War many of the artillery companies in the city of Philadelphia formed the First Regiment of Artillery, The Gray Reserves. Since the Washington Grays were the senior company their officers led the new unit.
When the Civil War broke out many of the members of this unit enlisted in several 90-day units, and when the call came out from President Lincoln for three-year regiments, the Grays formed the 118th and 119th from their ranks ("The Corn Exchange Regiment" and "The Gray Reserves," respectively). After the war the unit reformed as the old Washington Grays. When Pennsylvania reorganized their militia into a modern National Guard structure in 1870, the Washington Grays were enlarged to regimental strength and became the First Regiment Infantry, National Guard of Pennsylvania. (They became the First Regiment again, because of their seniority.) The First Regiment fought in the Spanish-American War, helped push Pancho Villa south of the US border during the Mexican Revolution, and died in great numbers on the front lines of World War I. After WWI, the unit was reorganized as the 103rd Engineer Regiment of the Pennsylvania National Guard. It remained a combat battalion, serving in World War II and the Korean War. In between battles, the unit never disbanded, but helped keep the peace during the Whiskey Rebellion of 1793, Know Nothing riots in the 1840s, and numerous other incidents before, in between, and since.

The First Regiment Infantry Museum boasts an incredibly rich archival collection of the regiment's records. It consists of about 100 volumes of records dating from 1812 to 1970--mostly minute books, roll books, and officers' letter books, with a few equipment account books, membership lists, etc.--as well as several photograph albums and scrapbooks. The collection is an excellent resource for military history and studying the battles and incidents in which the regiment was involved. It is also a superlative genealogical gold-mine, with membership lists, identified photographs, and narratives about individuals' military service. 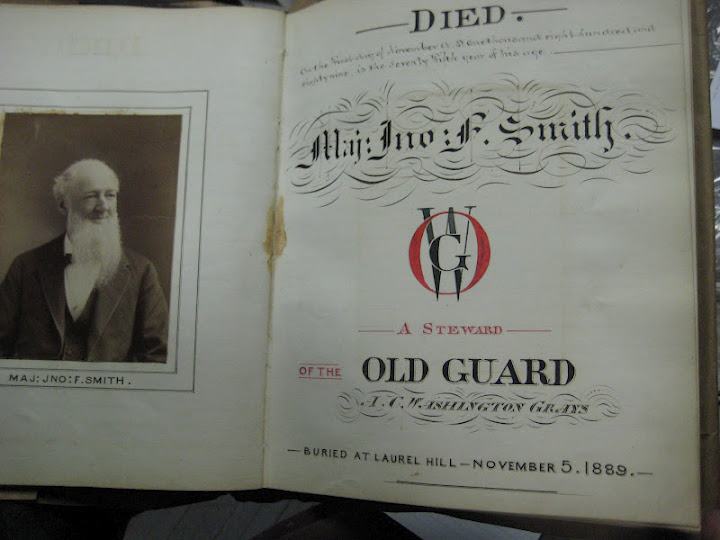 If the archival collection alone isn't enough to entice you, you should still go to the First Regiment Infantry Museum to see their impressive accumulation of militariana and war trophies. They have guns, knives, and uniforms from just about every war in United States History! They have a stained glass window of real Tiffany glass! They have a letter signed by General Lafayette on display! Plus, how many opportunites does one get to see a peg leg from the Mexican War? Be the "Dandy First" of your friends to check out the First Regiment Infantry Museum!

See all findinding aids from the 1st Regiment Infantry Museum. 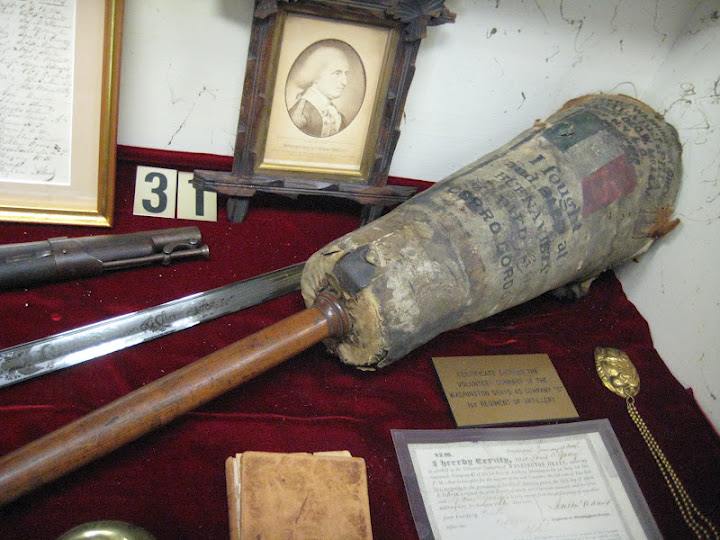 My 5th great grandfather served as drummer for the 1st Batt, Rev War. His name was Johannes (John) Dietrich Gaumer.

As a retired Guardman myself, I am interested in knowing what battles he participated in and any other information I can find about the 1st battalion.

Thanks for any help,

Thanks for your comment. If you would like to contact the 1st Regiment Infantry Museum for help with your research, call 215-823-4855 or write to Commander Headquarters, 103rd Engineer Battalion, 3205 Lancaster Avenue, Philadelphia, PA 19104.

If you would like research assistance from the Historical Society of Pennsylvania, you may wish to use the Research-by-Mail service. For $60 ($35 for an HSP member), a staff member will spend up to one hour on your request. Check out http://hsp.org/collections/library-services/research-by-mail for details.

Good luck in your research!

My husband found a WW1 dog tag in tent city occupied by Pennsylvania soldiers. His name is 2. Lt. WM. Lawson, 3 or 5th. UP Co., 1st. Pennsylvania Inf. Any help would be appreciated on who to contact for info. He was stationed at camp Hancock, Augusta, Georgia. Thanks. Belinda Koger.

Try contacting the 103rd Engineer Battalion Armory; they  administer the First Regiment Infantry Museum. Their phone number is 215-823-4855, or you can write to:

If you are unable to get in touch with them, email me at ccaustellenbogen@hsp.org and I can forward your information to our contact there.

My ancestor Hugh Lemmon served with the 1st Pennsylvania Regiment in the Revolutionary War. Pennsylvania Archives Vol. 23 pgs. 219, 255, and 339. He was a Ranger from 1778 to 1783. His obituary comes up when I search "Hugh Lemmon" on the web. The site is "The McHenry's and related families information about Hugh Lemmon".
Do you have any more detailed info about his service as to Battles, company affiliations, etc. that you could share with me? I have been accepted into SAR and would like to have him for a Supplemental.
Thank you.
Ned Cook

Mr. Cook - I would refer you to speak to one of HSP's librarians. They are happy to address research questions that can be answered in less than 10 minutes. Just e-mail ReadyReference@hsp.org or call 215-732-6200 ext. 209. If you need more assistance, I'd suggest our research by mail program. You can learn more at:
http://hsp.org/collections/library-services/research-by-mail. Good luck with your research!
Best, Lauri Cielo

I am researching my 5th great grandfather Col. Jehu Eyre. I noticed your article on him and the 'Dandy First'. Is there any other information that is available? I read that HSP has the Eyre family bible If so, would it be possible for someone to look at it? Please let me know. Thank you, Mike Lindstrom

I would refer you to speak to one of HSP's librarians. They are happy to address research questions that can be answered in less than 10 minutes. Just e-mail ReadyReference@hsp.org or call 215-732-6200 ext. 209. If you need more assistance, I'd suggest the research by mail program: http://hsp.org/collections/library-services/research-by-mail.

The obit for my g-grandfather, Capt James Muldoon, indicates he served in the First Regiment, when it was at Broad and Callowhill. Interestingly I served in the 103rd Co. B from 1970 to 1977. I feel a stronger touch with my ancestors now.

Wow Joe, that's a cool family connection! The Dandy First is in your blood :)

My grandfather was one of the last surviving veterans of the Spanish-American war. His name was Thomas Schroeder and he was a Sgt. in the 6th Cavaly Regiment Troop G. He passed away in 1962. Family members remember that his uniform was donated to a museum in the Philadelphia/Delco area. trying to locate it if it still exists. Can you help?

I'm not sure that I can help you out with this query. The 6th Cavalry was not a part of the 1st Regiment, so I'm fairly certain the uniform would not be at their museum as they only tend to collect things related to their unit. However, there are a number of museums in the Philadelphia area, several of which could have the uniform. Maybe you could try asking family members to see if they might know which museum it was donated to? If you can narrow down the potential museums, you could try calling them and seeing if they have anything donated under his name (or the person's name who donated it).

I am looking for imformation on my grandfather. He enlisted in the 103rd CO B, rose through the ranks, served in France, was wounded twice, and reassigned to Co A.I have read The Lost Sketchbooks and Soldiers of the Castle but only found one roster listing. My family has a number of photos of Camps Meade and Hancock and various officers but no names and very limited descriptions of the places and people. Other photos have German writing on them so I assume they were taken from prisoners. I need some direction to help identify the men with Grandpa and any records that may exist about his service and any commendations Co B and the 103rd may have earned. The names of Capts. Colle and Brydne appear on the few documents I found on Ancestry. How can I find out more?

Thanks for checking out our blog! If you are looking for the records discussed in this blog post or to connect with people who are familiar with the history of the 103rd Engineer Battalion of the Pennsylvania National Guard, I would suggest contacting the First Regiment Infantry Museum located at the 103rd Engineer Battalion Armory. You can call 215-823-4855 or write to:

The First Regiment Infantry Museum is located at the 103rd Engineer Battalion Armory. To contact the museum, write to