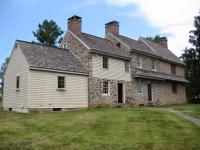 The area that is now known as Marple Township in Delaware County, Pennsylvania was purchased by a group of Quakers from the Cheshire region of England looking to build a new life for themselves. Francis Stanfield, Jonathon Hayes, and John Howell purchased the largest amounts of land in this area. It is thought by many that Marple Township received its name from the place in England in which Stanfield’s youngest daughter had been born, Marpool (today known as Marple, near Manchester in the United Kingdom).

Thomas Massey (1663-1708) was also born in the village of Marpool and had come to Pennsylvania as one of eight indentured servants brought over from England by Francis Stanfield. When Massey arrived in 1683 he was twenty years old. After several years he was able to work off the terms of his indenture, and as promised, he received a total of 100 acres of land, half from Stanfield and half from William Penn. In 1692 Massey married Phebe Taylor, who had come to America with her family on the same ship as Thomas nine years earlier. 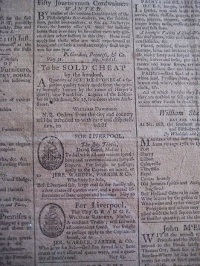 Four years after marrying, Thomas Massey purchased additional land from Stanfield’s son, James, and built a brick home as an addition to a wooden structure that already existed on the property at the time. Thomas and Phebe had seven children together: Esther, Mordecai, James, Hannah, Thomas Jr., Phebe, and Mary. After Thomas passed away, his oldest son, Mordecai, inherited the house and property. Mordecai built a stone addition onto the house about the same time (1731) that he married Rebecca Rhoads. The home stayed in the family until 1925, after which it was used as a farmhouse and eventually fell into disrepair.

In 1964, the area in which the Massey House was located was going through a phase of development. Threatened with demolition, a descendent of the Massey family, Lawrence M. C. Smith, purchased the house and one acre of land surrounding it, giving it to Marple Township with the stipulation that the house be restored within ten years. 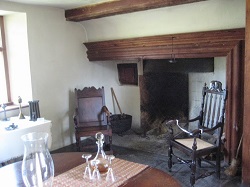 An interior view of the Massey House

Today, the 1696 Thomas Massey House is one of the oldest Quaker homes remaining in Pennsylvania and is open to the public. Offering tours of the house and hosting various programs and events demonstrating what life was like during the house’s three-century history, the Thomas Massey House also supports education and research. The second floor of the house contains the Hilda Lucas Memorial Library and Museum, which holds artifacts found during the home’s restoration as well as the archival collections of the Marple Historical Society. 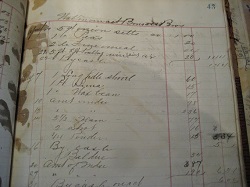 The Society’s collections include a number of 18th and 19th century, and even a couple of 17th century documents such as deeds and ledgers, the largest cluster of which is a series of seven financial volumes from the Bonsall Brothers general store, 1873-1918. In addition, the Society has original issues of the Philadelphia newspaper Dunlap's American Daily Advertiser from 1791. There are also several maps, scrapbooks, newspaper clippings, and photographs depicting the people, businesses, scenery, and organizations of Marple Township and surrounding areas in the collections. Of special interest may be an album of family photographs and military servicemen around the world, circa 1930s. 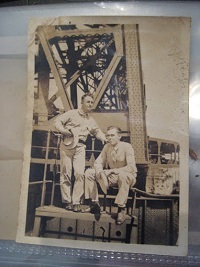 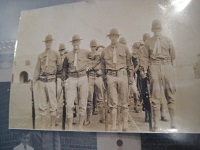 Photographs from a family album

A nice collection of local history research notebooks written and compiled by Broomall resident and newspaper journalist Clarissa Smith about various topics relating to Marple Township and nearby locations, documentation of the Massey House restoration, research on the Massey family, and other materials are also available to researchers using the library. In addition to housing the Marple Historical Society’s archival collections, the Massey House is also the location for the Society’s meetings and several of the Society’s officers also serve on the board for the Massey House. This close relationship between the Marple Historical Society and the 1696 Thomas Massey House has benefited visitors by providing them with a well rounded glimpse into not only the history of the Massey family and home, but also the overall history of Marple Township.

For more information about the Marple Historical Society or its collections, visit their website, email marplehistoricalsociety@yahoo.com, or call 610-353-4967.