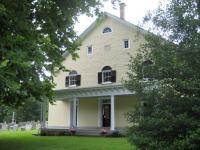 Southampton Baptist Church, also known as the Old School Baptist Meetinghouse, is the oldest Baptist Church in Bucks County, Pennsylvania. Located in Southampton, the Church can trace its origins to a dispute in 1691 between George Keith, a prominent Quaker, and the Society of Friends. Keith was of the opinion that the Friends should adopt a profession of Faith, while many members of the Philadelphia Yearly Meeting opposed. This dispute eventually led to Keith and his followers, known as "Keithians," to worship separate from the Friends. One group of Keithians that met in Southampton was eventually persuaded to join in worship with the Lower Dublin (Pennepack) Baptist Church in 1702. By 1745, the distance between the two church communities led members from the Southampton area to petition for severing ties with the Pennepack Church. The petition was approved in 1746, and the new church covenant for Southampton Baptist Church was signed that year. 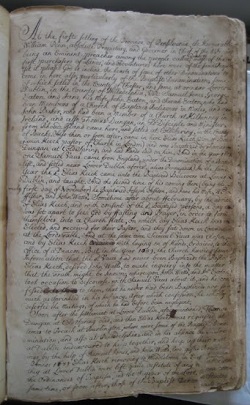 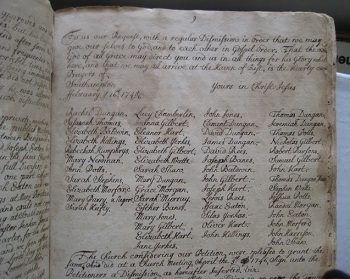 The early records of the church are full of details relating to the management and finances of the church, peppered with interesting tidbits about the church and its members. This excerpt from the early minutes of the church tells of Elizabeth Parson’s displeasure with her pew subscription. 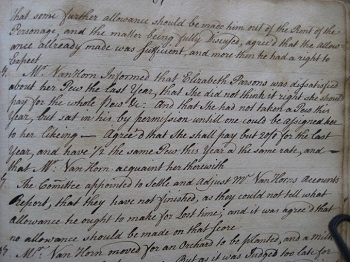 “Mr. VanHorn informed that Elizabeth Parsons was dissatisfied about her Pew the last Year, that she did not think it right she should pay for the whole Pew. And that she had not taken a pew this year, but sat in his by permission until one could be assigned her to her liking…”

Although the idea of renting a pew may seem odd today, pew rental was a major source of income for churches, particularly in the United States. The cost of renting a pew often corresponded to its location in relation to the pulpit. The closer a pew was to the front, the more expensive it was. In the undated pew rental record below from Southampton Old School Baptist Meetinghouse, you can see the major yearly price difference between the pews front in the front ($9.00) and the back right corner of the church ($2.50). This pricing often resulted in a level of enforced social status within the church seating, with more wealthy individuals and families able to purchase more expensive pews. 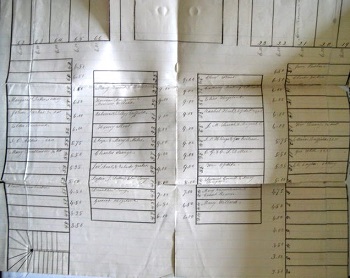 The Church's minutes are not the only place to learn interesting details of the church and its members. The earliest church register book (1746-1842) includes lists of births, baptisms, deaths, burials, and excommunications in the church. It’s interesting today to look back on the reasons one was excommunicated from the church, including the few below.

“John Baldwin, being accused of drinking to excess, was twice sent to the Church to come and clear himself, but he absolutely refused to come to the Church; and it being full proved against him that he lived in a continued course of drunkenness, to the dishonor of God: and the Religion he made profession of, therefore, he was publickly excommunicated before the whole assembly, after the publick worship, the 16 of July 1749.”

“Hannah Burns was publickly excommunicated for fornication before the whole assembly, after the public worship, according to the Church Censure.”

“Oct. 16 Thomas Beans was in the most publick manner excommunicated after Sermon, for obstinacy & falsely reproaching several of the Brethren.”

If you’re interested in learning more about the Southampton Old School Baptist Meetinghouse, check them out in Southampton, PA!

I am working on family history and am trying to find the burial place for Rev. Oliver Hart's  (1723-1795)  first wife, Sarah Brees.   She died in 1772 in Charleston, SC where Rev. Hart was the pastor of the First Baptist Church.  One document listed her burial site as Southampton, PA.  Would you have any information on this or an idea where I could search next?

For more information about the Southampton Baptist Corporation or its archival holdings, visit http://oldschoolmeetinghouse.yolasite.com/.