Phoenixville: A Tale of Two Histories

Phoenixville: A Tale of Two Histories 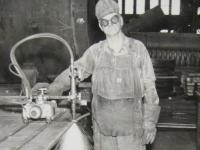 According to local legend, Lewis Wernwag, owner of a Phoenixville nail works mill, named the mill Phoenix Iron Company because the fiery red hot iron reminded him of the Phoenix (the mythical bird that dies and then rises from its own ashes). Shortly thereafter, what was once the small village of Manavon in Chester County, Pa., began to be referred to as Phoenixville.

From its beginnings, Phoenixville's history largely mirrored the history of the nail works factory. Phoenix Iron Company quickly gained international prominence by the mid-19th century particularly with the advent of the railroad as it became a major producer of railroad rails and iron and steel structural members. The Historical Society of the Phoenixville Area's (HSPA) archival collection consists of an impressive amount of materials that document the entwined stories of Phoenixville and Phoenix Iron Company.

In 1813, about a century after the first Europeans began to settle the Phoenixville area, Lewis Wernwag (1769-1843), a pioneer bridge builder in the United States, invested in a small nail works mill, the first such mill in the country that had been founded by Benjamin Longstreth in 1790. (HSPA has a Benjamin Longstreth ledger that dates from 1792 to 1810.)

By 1825, the company had become the largest nail factory in the U.S. In 1840, the first blast furnace was built to use anthracite, and in 1846 railroad rails began to be manufactured. In 1855, the iron company was reorganized and incorporated as the Phoenix Iron Company. 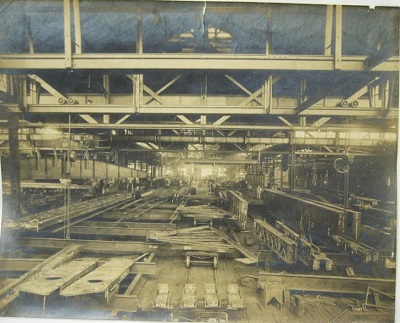 That same year, David Reeves, then president of Phoenix Iron Co., started the first structural shape mill in the country and began the fabrication and design for bridges. The company also manufactured weaponry used during the Civil War, most importantly, the "Griffen Gun" which was used heavily during the war. (HSPA has John Griffen's original patent papers from 1855.) In 1862 Samuel J. Reeves (David Reeves' son and VP of the company) invented the Phoenix column, the first hollow wrought iron column to be patented; it became widely used in buildings and bridges throughout the country and was one of the company's best known products. The company started making steel in 1889.

Below are images of the Phoenix Bridge Company that was organized in 1864 as a division of the Phoenix Iron Company following the invention of the Phoenix Column.  Phoenix Bridge Co. did a significant amount of business, fabricating and erecting hundreds of railway bridges in the United States, Canada, and Latin America. Despite its successes, the company experienced several calamities, including one of the most infamous bridge construction accidents in history. In 1907, a bridge that was under construction in Quebec collapsed into the St. Lawrence River killing 75 workmen. 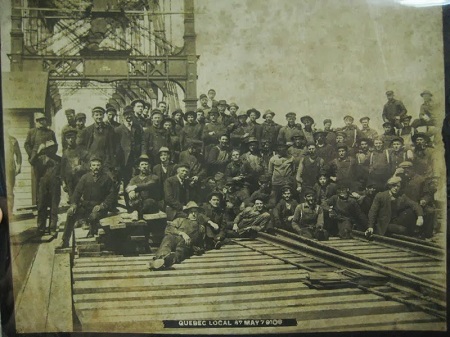 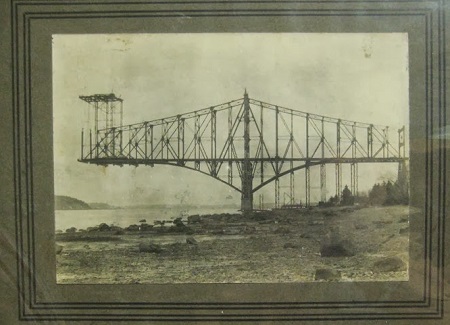 As Phoenix Iron Company grew, so too did the town of Phoenixville, which was incorporated as a borough in 1849. HSPA has in its collection a scrapbook of original documents compiled by Samuel W. Pennypacker (23rd Governor of Pennsylvania) that as he notes, "constitute[s] a very complete record of the organization of the borough of Phoenixville."  Most of the items relate to Samuel's father, Dr. Isaac A. Pennypacker who played an instrumental role in gaining the town's incorporated status. 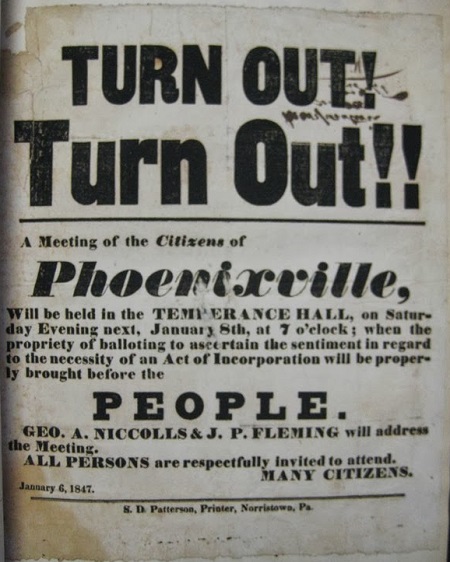 Along with the success of Phoenix Iron Company, Phoenixville also saw growth in other manufacturing businesses and enterprises such as boiler works, silk mill, underwear and hosiery factories, a match factory, and the famous (and now highly collectible) Etruscan majolica pottery. By the end of World War I, Phoenixville experienced its industrial heyday as an important manufacturing center.

After World War II, however, the Phoenix Iron Company, having gone through several hands and name changes by this time, began to experience a decline. This was due to increased domestic and foreign steel competition and from competition from aluminum and reinforced concrete products. The Phoenixville plant closed its doors in 1987. Other smaller manufacturing firms began to close around the same time, resulting in difficult economic times for Phoenixville.

Philadelphia's suburban growth beginning around the turn of the 21st century, as well as Phoenixville's efforts to embrace its history, has assisted with the town's recent revitalization. (Phoenixville currently has the largest registered historic district in Chester County, Pa.) It appears that Phoenixville is living up to its name, rising from the ashes of its late 20th century economic slump.

To learn more the Phoenix Iron Company and to discover more about the people, businesses, institutions, and associations that shaped Phoenixville's history, visit the Historical Society of the Phoenixville Area today!

See all finding aids for Historical Society of the Phoenixville Area

Enjoyed the refresher course on Phoenixville history. My mother's family (the Quinn's) are longtime residents and we would come from CT every year for the Dogwood Festival. Somehow I ended up back in Phoenixville teaching for 22 years!  What a gift. I love the community and the people. The Historical Society was always helpful when I brought my fifth graders to visit and research. Thank you

Thanks for reading our blog! I'm glad you enjoyed the post. It's always great to hear from people with ties to the areas that we write about.

To learn more about the Historical Society of the Phoenixville Area, visit http://www.phoenixvillehistoricalsociety.org/. Also, make sure to Like the Society on Facebook!