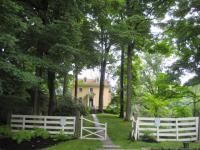 The Byre family, who has deep roots in the Nether Providence area, operated one of these mills. Several Byre family papers and artifacts from the 19th and 20th centuries can be found in the collections of the Nether Providence Historical Society including diplomas and graduation programs; wedding and baptismal certificates; photographs (including tintypes); Jacob Byre (1811-1885) business ledgers, 1833-1860, 1841-1846; financial papers; and 19th century wills and estate documents. 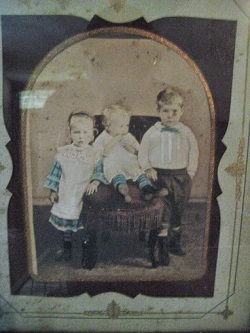 Photograph from the Byre family materials

Of special interest among the Byre family materials, and especially appropriate since today is the 100th anniversary of the beginning of World War I, are two World War I journals written by seventh generation Nether Providence resident Von H. Byre between 1917 and 1918 during his service as a driver in the U.S. Army Ambulance Corps. One of the journals has been transcribed and details Von’s trip from his training camp in Allentown, PA across the Atlantic Ocean on board the Giuseppe Verdi on his way to Italy.

"June 16 – Arose 4:15 A. M. and went  on deck but didn’t stay, came back and went to bed. Ship sure is rolling, waves are beating all over her, and hatches have to be closed. Going to stay in bed as I feel as if I’m going to contribute to the fishes. Ship sighted in late morning, gunner polishes his gun but she goes out of sight again…”

"June 21 – Usual rising hour. Had breakfast and then came on board to wait for the lifeboat drill that we have daily…Longest day in the year. An inspiration for a verse and a half of a poem today. Still in the danger zone, maybe a day out from Gibraltar." 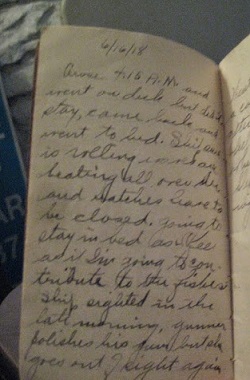 This diary ends on June 30, 1918 because Von gave it to an American sailor he met who was returning to the United States. The sailor promised that he would mail it to Von’s parents once he arrived in the States to let the Byre’s know where Von was stationed and how he was doing. The journal made its way to Von’s parents, and Von too eventually returned safely from Europe. In 1963, he became National Commander of the Ambulance Corps Alumni Association. 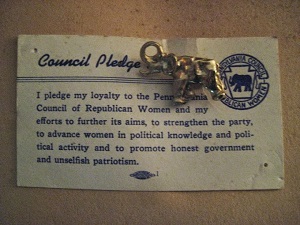 Pledge and pin of the Pennsylvania Council of Republican Women

In addition to the Byre family materials, other documents (including a subject file and audiovisual materials) that capture a piece of the history of the residents, buildings, businesses, and organizations of the local area can be found at the Nether Providence Historical Society. One organization that is especially well documented through scrapbooks, administrative and financial materials, membership records, newsletters, and other records is the Nether Providence Council of Republican Women, which existed from 1963 to 2005.

My mother is a Byre and a direct descendant of Jacob Byre. I would be very interested to see the information you have on the family. Is there any way I could schedule a visit?

Hi Jessica, Thanks for checking out our blog! The materials described in this post are held at the Nether Providence Historical Society. You should contact them directly to schedule a time to view the Byre materials. At the top of this post, on the the right side of the window, you'll also find links to the Society's email and Facebook page. In the meantime, the finding aid for the Nether Providence Historical Society local history collection (which includes the Byre family material) is already posted online at http://hdl.library.upenn.edu/1017/d/pacscl/HSP_NPHS02.

My mother was also a Byre (Worrell as well) and grew up on the Byre homestead in Wallingford. I spent many an hour with my Uncle Von who lived across the street. Would it be possible for me to read his diary? I have original photos of him in uniform as well.

Thanks for your comment! For more information about the Nether Providence Historical Society or its collections (including the Byre family papers), which are housed in the Thomas Leiper House, visit the Society's website at http://nphistory.org/ or email nphistory@verizon.net. You can also "Like" the Society on Facebook for updates.

Thank you Sarah! I have several original documents that I inherited over the last couple of years and I am looking to see where they all fit in.

I remember Uncle Von. He was actually my Great Great Uncle. He had the most beautiful garden in his back yard. At least that is how I remember it. We would visit him a few times a year after we stopped at my great Aunt Minerva's in Media and Great Aunt Elva's in Chester. We are in NJ and my family is from Howard Byre, Von's oldest brother. Please email me. I would love to talk to you.

In case you haven't had a chance to check this blog post recently, I just wanted to let you know that Debra responded to your comment about getting in touch. See her comment below, which includes her email address.

I am Hannah Byre Worrell's great grand daughter. My mother Barbara was raised on the homestead by Hannah and her sister Laura.

I would love to here from you. I'm living in Radnor which isn't too far from
Wallingford.

Nice to see there are still so many of us!
Debra

For more information about the Nether Providence Historical Society or its collections, which are housed in the Thomas Leiper House, visit the Society's website at http://nphistory.org/ or email nphistory@verizon.net. You can "Like" the Society on Facebook for updates.