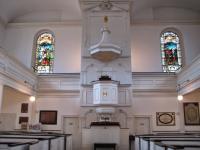 St. Peter's Episcopal Church in Philadelphia, Pennsylvania was established in 1758 by members of Christ Church who had moved to the new neighborhood of Society Hill. This new church helped to ease the number of worshippers at Christ Church, which had begun feel the effects of overcrowding in the 1750s. It also allowed those in Society Hill to have a center of worship closer to their homes. St. Peter's remained linked to Christ Church (they were jointly run with the same rector, vestry, and wardens) under the moniker "The United Churches of Christ Church and St. Peter's" until 1832. At that point, St. Peter's separated from Christ Church, becoming its own independent entity, although Bishop William White (rector of the United Churches since 1779) remained the rector at both churches until his death 1836.

St. Peter's church building, which held its first service in 1761, is associated with well-known architects and sculptors. The church was designed by Robert Smith, considered by many to be one of the most important architects of the Colonial Period in America; the bell tower and steeple, added in 1842, were designed by renowned Philadelphia architect William Strickland; and Philadelphia neoclassical sculptor, William Rush, carved the statues Exhortation and Praise, from pine (and then painted white) for the church's interior in 1812. 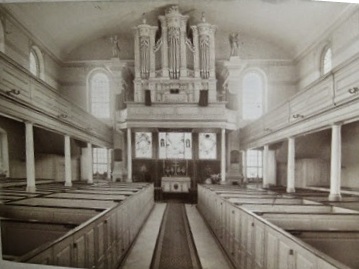 The east end of St. Peter's Church at Eastertide, 1887. If you look closely, you can see William Rush's sculptures perched on the left and right sides of the organ case.

In addition to designing the bell tower and steeple for the church, William Strickland designed a gravestone in St. Peter's churchyard for the grave of composer, music publisher, and organist Benjamin Carr. The gravestone design consists of a cylindrical stone and a Grecian urn that rests upon a tripod, imagery which is meant to honor the Greek god of music, Apollo. The monument, was commissioned by the Musical Fund Society, one of the oldest musical societies in the United States, which Carr helped establish in 1820. Carr, whose family was involved in the music industry in England, came to America in 1793. Eventually, Carr's father and brother followed. Benjamin ultimately settled in Philadelphia and opened his own firm for selling and publishing music, becoming one of the best known and most prolific music publishers from the late 1790s until his death in 1831. Carr was also an active performer and served as the organist at St. Peter's from 1816 to 1831.
Several other well known Philadelphians are buried in the churchyard at St. Peter's including painter and naturalist Charles Willson Peale (1741-1827); the 11th Vice President of the United States, George Mifflin Dallas (1792-1864); and Nicholas Biddle (1786-1844), President of the Second Bank of the United States. 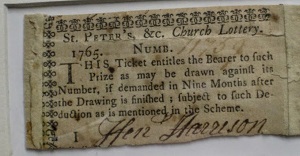 A ticket from a lottery held to raise money for the church in 1765
When we visited St. Peter's we found an impressive number of records in the archival collection. The St. Peter's Episcopal Church records, 1761-2013 (bulk 1832-2013), consist of minutes of the vestry, parish registers and records of service, accounting and financial records, deeds, blueprints, photographs, sound recordings and other materials relating to the church's choir, and other records of St. Peter's Church. In addition, there are materials from parish organizations and affiliated organizations. Most of the records in the collection with information dating prior to 1832, when St. Peter's was still part of Christ Church, are copies of the originals, which are still held at Christ Church. One exception to this is the pew rent volumes, the originals of which date to 1823. 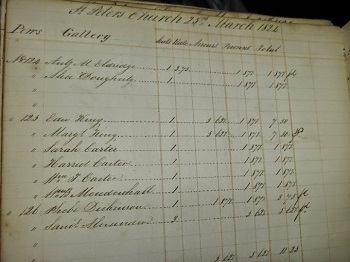 Pew rent volume, March 1824
The collection also contains records from St. Peter's School. In 1834, St. Peter's established a school as an adjunct of the church. From 1903 until the early 1960s, the school also served as a choir school, providing intensive musical training for its students in addition to academic schooling. In 1969, the school became independent from the church. 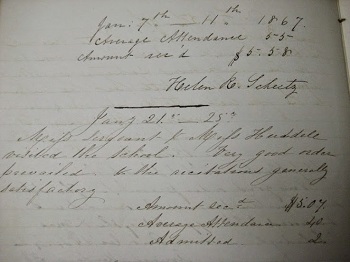 St. Peter's School record from January 1867. The average attendance is listed as 55.
With a history dating back over more than 250 years, it's not surprising that St. Peter's Church has such a wide variety of materials in its archival collections. If you have ancestors who were involved with this historic church or you're interested in the church's architecture, the building's restoration process, or its history in general, you should put this collection at the top of your research list.