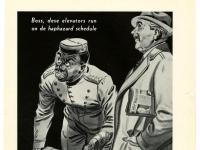 HSP’s collection offers a wealth of primary sources to help students on all grade levels dive deep into analyzing the history of African-American’s struggle for freedom and equality in the U.S. We invite you to explore our featured lesson plans spanning the Civil War to Civil Rights in Pennsylvania. Then, explore all of our African-American history focused lesson plans here.

Throughout the twentieth century, blacks in Pennsylvania employed numerous strategies to achieve the civil rights they deserved. Their efforts to receive their rights began with a strategy of New Deal liberalism in the 1940s and 50s headed by prominent black leaders. When attempts to rewrite the laws using the established political system failed, black leaders encouraged more direct action, like boycotts and sit-ins. The movement quickly took on a Black Nationalist approach. Philadelphia became the perfect place for several Black Power conferences and home of the short-lived, though active, Black Panther Party. This unit leads students through these phases in the fight for civil rights in Pennsylvania using primary sources from two collections at HSP.

The Evolution of African American Music in Pennsylvania

In this unit, students will expand their learning and knowledge of the significance of African and later African American music, as a strategy of survival, work motivation, community building, and an emotive vehicle of both joy and sorrow during the times of the Triangular Slave Trade and legalized slavery in the United States (including Pennsylvania).

What arguments did abolitionists make against slavery? How did abolitionists propose to end slavery? These historical questions are at the center of this two-lesson unit focused on seven primary documents. In engaging with these questions and these documents, your students will consider the impacts and the limits of abolition, a social movement that spanned hundreds of years.

Visual Culture and the Civil War

Political cartoons were a popular source of information during the Civil War and created an excellent way to disperse a political or social opinion to a wide audience. The Lesson features almost twenty political cartoons ranging from 1860-1868 that capture the spirit of the Civil War and helps students to learn the multiple opinions and perspectives of those living through it.

In the early 1900s, the Philadelphia labor movement struggled to overcome the obstacles of the city’s close alliance between politicians and businessmen. Few workers experienced an increase in benefits and wages, let alone the formation and recognition of a union. Many ethnic groups suffered from biased hiring policies and corrupt owners. The African American community in Philadelphia also endured discriminating hiring policies in most skilled and unskilled job positions. Through an analysis of a speech by James Samuel Stemons and a letter from Joseph Fels, students will gain multiple perspectives of business in the city.

Baseball and Race in Post-bellum Pennsylvania

In the years after the Civil War many people, like Octavius Catto, worked tirelessly to break down racial barriers and ensure that blacks received the social and political rights they deserved. In many places, including Philadelphia, baseball provided a platform through which to do this. Through their talent, intelligence, diligence, and drive both on and off the field, men like Octavius Catto and the players in Pythian's Base Ball Club worked to build strong ties as well as local and national support systems for the black community of Philadelphia.