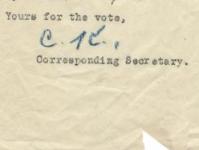 20th century
African American
Civil Rights
Politics
Women
This blog post was written by Ashley Jones, a Cultural Fieldwork Intern from the Temple’s School of Education.
As we approach the 100th anniversary of the 19th Amendment and women’s suffrage, we can take this opportunity to highlight how various groups have struggled with gaining and securing voting rights in the United States. Your students may or may not know that 40 years after women gained the right to vote, African Americans were still struggling to exercise their constitutional voting rights in the Southern United States. Although the 15th Amendment secured the right to vote for African- American men following the Civil War, long-held prejudices and discrimination throughout the south made it difficult--or impossible--for them to do so. Black women faced even more hurdles on their way to the polls: The early women’s suffrage movement and indeed, the feminist movement as a whole, largely excluded black women from their organizations and activism. So, while white women may have won their voting rights in 1920, black men and women were still very much fighting for theirs.
In HSP’s Digital Library, you will find two letters that speak more to this topic: one from Caroline Katzenstein, the Corresponding Secretary of the PA Women’s Suffrage Association, and the other from Reverend Dr. Martin Luther King, Jr., leader of the Southern Christian Leadership Conference. Though their goals were different, they shared many things in common.
Caroline Katzenstein letter
Katzenstein wrote on August 1, 1912 an open letter to the heads of new suffragist organizations pleading them to join the PA Women’s Suffragist Association. She urged that it was their “personal responsibility of advancing the cause” and that they must do so with haste as the Women’s Suffrage Association was preparing for a hearing in 1913 before the state legislature. Katzenstein also stressed that individual women suffragists could contribute by joining the state association and that “inspiration” could be made through “dues” in the form of monetary payments. In short, Katzenstein tried to convey that in order for the movement to be a success, the Women’s Suffrage Association needed financial support.
MLK Letter
King also wrote an open letter, this one in November, 1961. It is unclear for what audience this letter was meant, but it appealed to all who supported the cause for voting rights for black citizens. King urged that making democracy a reality in the South is a “battle for our preservation,” and while he and his organization did not lack courage, they lacked funds. With funds given to the cause, a “democratic life will be yielded for all.”
These primary source documents are a great tool for your classroom. They could be used in a Government course, studying amendments and civil rights, or in a U.S. History course in a unit on either the Women’s Suffrage Movement or the Civil Rights Movement. If I were utilizing these documents within my own classroom, I would have my students work closely with them by reading each and comparing the messages conveyed by each author. This can be done through a jigsaw activity where students are split in half with each half analyzing one document in pairs. Through this activity, students will become more experienced with primary document analysis. Once they have identified the author, period/date, recipient(s), and main ideas in their assigned letter, the pairs could be matched up with pairs of the opposite letter. They would then compare and contrast each letter for what messages are similar, what is different, and how did each author tried to gain support for their cause and organizations.
Both of these letters can be used across multiple grades and various reading levels. They are short enough that they will not require your entire class period, but would make a great guided practice activity. Through this activity, students will be able to make connections on various issues in the matters of race, gender, and equality. Students will be able to compare how different groups handled these issues and how those outcomes impacted the United States then and now.