Philadelphia in the late 1800s: International Industrial Leader – Then and Now?

Philadelphia in the late 1800s: International Industrial Leader – Then and Now? 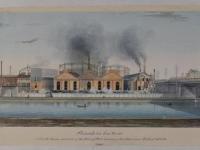 *This blog is the tenth in a series by Sarah Sharp, Global Educator for World Heritage Philadelphia

In the late 1800s, Philadelphia led the nation in industrial production, especially in manufacturing. This position not only defined the city’s economic status but also shaped many of the international connections, helped to carve out neighborhoods, and led to the establishment of numerous charity organizations. What actually was happening here in the nation’s largest city at that time?

Philadelphia’s achievement of World Heritage City status in 2015 has sparked considerable interest in the city’s past and also in other such cities around the globe. What perspective can we discover for the city’s international life now?

Industrial workers and business leaders both contributed equally to enable Philadelphia to reach economic strength in the last decades of the 1800s.  Even if we just looked at a few areas of manufacturing and related activities, these achievements are evident.  In terms of textile weaving, the city was the world’s largest and most varied by this time. Weavers at the Quaker Lace Company, the Pennsylvania Woven Carpet Mills, and the New Glen Echo Mills, all produced material goods with workers and leadership who had international origins.

Regarding the production of passenger steamships and warships and utilizing innovations in engineering and construction, the Cramp Shipyards absolutely led the way, building the St. Louis and the St. Paul as well as the USS Maine. Cramp’s company also supplied the federal government with armored warships, as well as the governments of Turkey, Russia, and Japan.

In order literally to fuel the massive industrial production developing through this era, Pennsylvania’s natural resources, especially in oil and coal, played key roles.  Further, Philadelphia was a major oil refining and storage center.  As a major railroad transportation hub for the Delaware Valley and across the country, Reading Terminal provided the physical setting for train travel, often supplied by Baldwin’s steam locomotive engines, and construction activities.  This new “proper” terminal held many appealing features such as elevators, a men’s smoking room, passenger services for baggage and medical concerns, various waiting rooms, a post office, and a restaurant.  In addition, Philadelphia’s Baldwin steam locomotives filled orders for Russia, Finland, New Zealand, Brazil, Chile, and elsewhere, and sent steam streetcars to several American cities such as Brooklyn.

A cultural and social profile

Philadelphia’s industrial expansion had many foreign connections, with the international reach expanding as the 19th century proceeded.  What will we find if we look at the social, cultural, and religious dimensions of life in the city?

A profile of immigration trends for the late 1800s shows that Philadelphia’s percentage of foreign born was smaller than what was in New York City and Chicago, though the Philadelphia was the third most important immigrant port in the nation at this time.  Immigrants arrived in Philadelphia on several different passenger ship lines, including the American, Red Star, Hamburg-American, Holland-America, Italia, and North German Lloyd lines.  In 1873, the International Navigation Company started service between Antwerp, Belgium, and Philadelphia every two weeks, using a charter from the state of Pennsylvania.   By the early 1880s, the North German Lloyd line ran steamer ships between New York City and Bremen, Germany twice per week, and the trip too just over eight days. This same line increased its tourist business substantially at this point, offering  trips to the far East and South America. They built bigger ships and expanded its mail service as well.

Who were these immigrants and what happened to them after they came to Philadelphia?  Between the 1870s and the early 1900s, over one million people arrived, and the operations for receiving immigrants changed dramatically in several ways.  The city of Philadelphia had established a health inspection and quarantine facility at the Lazaretto site in Essington in 1799. In 1876, the Pennsylvania Railroad created an immigration station at Pier 53 on Delaware Avenue, and the federal government built additional immigration facilities at Reedy Island in Delaware Bay in the mid-1880s.

Immigrants in this era grouped themselves in patterns similar to other cities in the Northeast, though less densely settled.  “During the seventy years from 1860 to 1930, the residential areas of Philadelphia shifted from mild to pronounced segregation by income and ethnicity.”  The Southwark, Spring Garden, Northern Liberties sections gained far more Spanish-speaking residents, and Latino organizations emerged in response.  Cubans Spaniards, and Puerto Ricans were numerous among the City’s cigar makers and workers at the Baldwin Locomotive Works.

A distinct Chinatown emerged in this era.  The federal Chinese Exclusion of 1882 Act dictated that mostly single men would be the inhabitants of this neighborhood.

Newspapers in immigrants’ languages appeared, and numbers of synagogues and churches grew significantly.  Although municipal services were very limited in the late 1800s, some organizations, such as the Octavia Hill Association, offered relief for the poorest of the arriving immigrants and populations moving north from the upper South of the U.S., as did the St. Peter’s House settlement staff.  Notably, various immigrant groups strengthened or created cultural and mutual aid organizations, such as La Fraternal founded in 1908.

More generally, the City’s residents experienced a broad range of new cultural and educational features, including amateur and professional baseball teams, department stores, a new free library system, and theatres.  Just as African Americans organized The Pythian Baseball Club in the 1860s, the Cuban Giants emerged in the 1880s.  (The Phillies were created at this time too.)

The basic idea of a department store, while not of American origin, certainly grew into its own in Philadelphia, and contributed to center city’s commercial landscape.  John Wanamaker’s (1838-1922) store deserves special attention as Philadelphia’s first department store and the first to use price tags.  Other stores of the era were Strawbridge’s and Gimbel Brothers.

Although many may think of the Free Library system for its neighborhood branches, there are many different sites that first claimed to be the origin of the library. The central branch was begun in 1894 with a bequest from Philadelphian George S. Pepper.

While many local painters were finding a stronger connection to several European cities over Philadelphia in this era, many actors and actresses were developing their careers in Philadelphia to national and international acclaim.

And, educational opportunities were growing as well in this era. Not only were colleges and universities expanding, including the University of Pennsylvania which added several graduate programs, admitted women to them, and enrolled students of color.  Some such institutions were quite unique to Philadelphia. One example is the Woman’s Medical College of Pennsylvania, which drew students from India, Japan, and Syria, as well as African American women from the South.  It was the only college in the world at the time to train women to become physicians.

Philadelphia as an international city today

Philadelphia’s current international presence is vibrant, whether we focus on commerce, education, medicine, culture, or any other aspect of the city’s life.  World Heritage City status has heightened awareness of that diversity, certainly, and the Global Philadelphia Association’s 200 members show this rich and broad range.

Lisicky, Wanamaker's: meet me at the eagle

Trumbauer, The Free Library of Philadelphia

Vázquez,  The Development of Pan-Latino Philadelphia, 1892-1945, The Pennsylvania Magazine of History and Biography

Warner, The private city: Philadelphia in three periods of its growth