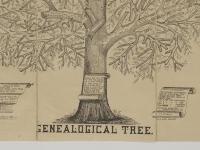 *This blog is the second in a series by Sarah Sharp, Global Educator for World Heritage Philadelphia

During the colonial period, Philadelphia expanded both through immigration and in trade. If we walked through Philadelphia’s neighborhoods in the colonial and new nation era, we would have quickly seen evidence of international connections and populations.  Swedish, Dutch, English, German, Scotch-Irish, other Europeans, as well as Africans, all lived in the city by the mid-1660s.  They represented across all economic classes and social strata, including landowners, business owners, merchants, artisans, mariners, indentured servants and slaves.   To focus on one group, over 70,000 Germans made their way to Philadelphia in the decades before the American Revolution.

As teachers, we are always trying to find ways to enable our students to hear and see the lives of these early generations.  But, how to do that?  How can we nurture that curiosity that we feel about lives, locales, and times that seem so remote to students?  One great way to start is to watch History Making Productions’ (HMP) “A Lost World” (1600-1680), “In Penn’s Shadow” (1680-1720), and “Franklin’s Spark” (1720-1765) to generate enthusiasm for the various topics, and raise questions about some key individuals and groups.

Another possibility is to see the new Philadelphia World Heritage City (WHC)  film.  At HSP, try using the materials covering Wicaco (Annals of the Swedes on the Delaware), Southwark (named for the London district, Southwark, The old district of Southwark in the county of Philadelphia),  Gloria Dei Church or Old Swedes’ Church (A brief historical sketch of Gloria Dei Church Old Swedes'),  David Franks (David Franks : colonial merchant), Andrew Elliott (Andrew Elliot's Philadelphia odyssey : his early years, 1728-1764 : the story of a young Scottish merchant in America on his way to becoming a Royal Officer), Isaac Norris of Fairhill (Isaac Norris account books 1730-1770), and, of course, William Penn (William Penn, architect of a nation).  One way to implement these resources to to provide students with portions of some of the printed documents in the collections. This will allow students to work in small groups and evaluate why these people and places are important to Philadelphia and our shared national history.

In the HMP films as well as in HSP material, we see images of houses and other types of buildings.  We can also see how people dressed as well as what they ate and drank.  Ask students to imagine how adults and children actually spent their time based on these documents.  Have students accomplish this by creating drawings or creative writing that uses the examples set by the primary sources.  What did artisans, upper class homes, and merchants’ warehouses actually look like?

Some ideas include creating travel brochures for the colonies and for other World Heritage  cities. William Penn’s advertisement for Pennsylvania would be a great example to get students thinking about how to describe the colony. Or, have students send an imaginative Twitter feed while walking through one of the early Philadelphia neighborhoods as if they are sharing news with a Boston family member or a relative visiting the colony for the first time.

Stories of immigration into Philadelphia during this remarkable City’s earliest generations also gives us the opportunity to look at situations involving populations arriving in our own time.  Here’s a useful source where students can contrast our citiy's statistics with worldwide statistics.

For more informative websites, please check out the following: