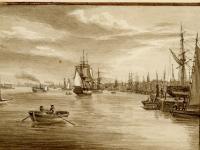 *This blog is the third in a series by Sarah Sharp, Global Educator for World Heritage Philadelphia.

We know that Philadelphia, by the early 1700s, was a big city, at least 20,000 people (30,000 by the time of the Revolution), and certainly the most important port on the Atlantic for the British empire in North America.  Economic growth rapidly expanded across the city and region in these decades leading up to the American Revolution.  To shine a spotlight on colonial trade overall raises specific questions about what was created and exchanged, how and where trade actually happened, who led commerce, who workers were -- and comparisons and contrasts with 21st century trade networks that exist in Philadelphia today.

Between the 1600s and mid-1700s, Philadelphians carried on a robust trade relationship based in the export and import of numerous products.  A quick look at three trade situations involving fish, shipbuilding, and linen show the diversity and extent of export operations, while consideration of wine, earthenware, nails, and taffeta show some of the variety of imports.  Although not a key feature of production for export in the Philadelphia area in this era, New England colonists shipped large quantities of fish into this city, which was then moved on to Lisbon and other Portuguese cities.  Local area farmers provided flaxseeds for Irish and English farmers who then raised vast quantities of this crop to weave into linen fabric for all types of household and industrial use across the British dominion.

How would we compare items that appear in our stores in Philadelphia today with what came into the city so much earlier?   Students can investigate colonial records (such as Isaac Norris account books, Shippen family papers 1701-1856, and Southwark), imagining who received these items and put them to use. Students who contrast colonial imports with modern imported goods would see many differences, of course, in both numbers and varieties of these items.  (Students can use this source to see modern imports and export information: https://www.ustradenumbers.com/ports/port/port-of-philadelphia-pa/)

In terms of shipbuilding, by the time William Penn established Philadelphia in the 1680s, Swedish settlers had already been building boats on the Delaware River for many decades.  The Southwark neighborhood, named for a similar area located on London’s Thames River, established a major reputation for this industry, with bustling wharves and shops nearby.  The vast timber resources and skilled artisans combined to make Philadelphia the leading shipbuilding area in eastern North America throughout the entire colonial period.

During the period before the 1750s, trade between Philadelphia and the larger Caribbean area, and especially the West Indies deserve special attention.  By 1689, at least ten ships annually sailed to the Caribbean from the city’s docks and wharves.  Many more ships were involved yearly as the decades progressed.  Local merchant families, such as those of Samuel Carpenter and Isaac Norris, led and financed this trade.  Students may find it exciting to investigate some of these individuals and their careers, create their biographical portraits, then contrast their lives and activities with today’s business leaders and their global reach now.   Here are some sources that students can use to find out about modern business leaders:

Beyond business leadership, questions about actual laborers quickly demand our attention, too.  Between the late 1680s and mid-1700s, Philadelphia’s population was quite diverse in the variety of jobs people held as well as who did them.  If we walked through the city’s streets, we would encounter slaves, indentured servants, journeymen, and teenaged apprentices all practicing their various skills to contribute to the local economy, while also creating products for international trade.  For example, carpenters and those who tended the iron forges participated in shipbuilding in the Southwark neighborhood.  Captains of the ships that entered and left Philadelphia purchased slaves to work aboard on their voyages as well as in their homes across the city.  Certainly the modern history of the Philadelphia Naval Yard, how the shipbuilding industry flourished there, as well as who worked there make fruitful comparisons with the same industry in colonial decades.  Of course, we know that the Philadelphia Naval Yard has gone through its own dramatic repurposing in recent years (http://www.navyyard.org/).

Students might also be intrigued to compare and contrast these aspects of colonial Philadelphia’s history with other cities around the world in the same time periods to explore similar economic activities and concerns.  For example, focusing on Havana, Cuba, Cairo, Egypt, and Hamburg, Germany produce solid results.  These sources may be helpful:

Here are several additional informative websites, some have timelines, and all provide lots of local historical details:

I've been performing research on Robert Leslie of Philadelphia who established the first London-based trans-Atlantic manufacturing to import watches to his firm, Leslie & Price, in Philadelphia in 1793. Leslie was the principal who made watches and clocks for Thomas Jefferson. He's also the first maker in America to receive horological patents (signed by George Washington). I would be happy to share information. Rich Newman - colonialwatches@gmail.com