Printer-friendly version
Home › Blogs › Educators Blog › What was incarceration like in historical Philadelphia? 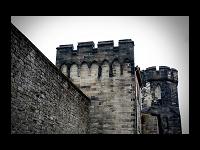 *This blog is the sixth in a series by Sarah Sharp, Global Educator for World Heritage Philadelphia.

When Pope Francis visited Philadelphia in September 2015, one of his stops was the Curran-Fromhold Correctional Facility where he met with a group of men and women who were inmates there (See http://www.nbcphiladelphia.com/news/local/Pope-Francis-Visit-Gives-Hope-to-Sexually-Exploited-Women-in-City-Jails-328706181.html).  This historic event, which put Philadelphia’s jails and prisons in the spotlight, gives us and our students the opportunity to consider the topic of incarceration in our city, both past and present.  We can begin by asking what circumstances prisoners faced in Philadelphia’s early generations.  Who was in charge of their care?  What was their care like?  Where did the City hold these individuals?  What views did these policies represent?  Was there an international context for these situations? And, maybe especially important, what connections can we make with our own time?

The history of Philadelphians’ ideas and practices regarding incarceration date from our colonial era.  By the late 1600s, various views emerged.  For example, the city government built a jail to detain criminals, rather than to limit their punishment to a fine or branding as was the practice in some other colonial cities.  As another example, William Penn thought that criminals should learn trades while in prison as a feature of their rehabilitation and that the death penalty had no place in his colony except in cases of murder.  (For more on Penn, see http://www.quakersintheworld.org/quakers-in-action/43/Reformers-in-Criminal-Justice.)

Through the 1700s, not only did new ideas emerged regarding criminals, but new facilities appeared as well.  The jail at 3rd and High Streets, built in 1722, separated debtors from criminals, showing some awareness that these two groups were in different categories. Construction of the Walnut Street Prison in 1773 (also known as the Walnut Street Jail, see marker at 6th and Market Streets) showed increased city efforts to house convicts.  Through the 1790s, English and French visitors came to see the reforms that directors had instituted at the Walnut Street facility, including the separation of the sexes, no more availability of liquor, continuation of separation of inmates who were debtors from those who were criminals, the availability of religious services, selective use of pardons, and regular inspection (For more, see Teeters, They were in prison; a history of the Pennsylvania prison society, 1787-1937, formerly the Philadelphia society for alleviating the miseries of public prisons; Michel, http://philadelphiaencyclopedia.org/archive/pennsylvania-prison-society/)t=jclc).  As a sidenote, General Howe used the Walnut Street Prison to hold 500 American colonists captured during British occupation of the city.

At the same time that American political leadership created the new Constitution in Philadelphia in 1787, members of the Philadelphia Society for Alleviating the Miseries of Public Prisons laid out additional plans for Philadelphia prisoners.  This organization became the modern Pennsylvania Prison Society (http://www.prisonsociety.org/), and it focused on reform of the Walnut Street Prison and led the way for creation of Eastern State Penitentiary.  The Society’s leadership included Benjamin Franklin (1706-1790), Benjamin Rush (1746-1824), William White (1748-1836), among others, who based their views in various religious and social frameworks, including the ideas of Quaker John Howard (1726-1790), a British prison reformer

The 1800s brought construction of additional facilities, including Arch Street Prison), Moyamensing Prison, and Eastern State Penitentiary, which all showed innovative thinking about care and arrangements. However, it is really Eastern State that received the most attention and publicity, both then and now..  Important European visitors, such as Alexis De Tocqueville, who came in 1831 and lauded the new style, and Charles Dickens, who arrived in 1842 and severely criticized the system.  Eastern State’s construction reflected a broad shift away from “English patterns” to the new views which included different approaches to “rema[king]” the prisoner, such as solitary confinement and isolation from society, cleanliness, and many work projects. (For more see, Meranze, Laboratories of virtue : punishment, revolution, and authority in Philadelphia, 1760-1835)  (Teeters, They were in prison; a history of the Pennsylvania prison society, 1787-1937, formerly the Philadelphia society for alleviating the miseries of public prison).New views about incarceration were developing in Europe as well as in Philadelphia and elsewhere in the new nation..  Use of such new practices caught on in Latin America, Europe, and Asia, although slipped in popularity here in United States (Michel, http://philadelphiaencyclopedia.org/archive/pennsylvania-prison-society/).  One of the reasons for such a drop in use was the opposition to solitary confinement that emerged

We als can ask questions about the people who became inmates at Philadelphia’s jails and prisons during these early centuries.  An immigrant who had fallen into debt?  A farmer who had stolen a horse?  A woman who had turned to prostitution?  What were their ethnic and racial heritages?  For example, the percentage of African American prisoners in the 1830s and 1840s at Eastern State as well as at Moyamensing ranged between 29% and 48%, far higher than the 7% that this group represented for the City’s overall population.  Runaway slaves, when apprehended, may have been held in Philadelphia jails as was the case in nearby West Chester before their return to Southern masters according to the terms of the 1793 and 1850 federal fugitive slave laws.  More generally, however, at least at Eastern State, inmates had often been convicted of theft and reflected Philadelphia’s increase in northern European immigration patterns.

Imprisonment of female offenders, both in Philadelphia’s past and present, deserves separate coverage.  By the mid-1800s, members of the Female Prison Association of Friends in Philadelphia were visiting both male and female inmates at Arch Street, Moyamensing and Eastern State prisons, urging for better treatment.  At about the same time, a group of Philadelphia Quaker women opened Howard Institution for Discharged Female Prisoners, a type of halfway house that was gaining popularity in England, Scotland and Ireland.  These institutions offered inmates religious and literary activities and the opportunity to learn trades, such as sewing.

In Philadelphia in the early 1800s, some of the city’s leaders focused on children who had been housed in regular jails.  Drawing upon state, local, and private funds, the House of Refuge opened in 1829 admitting Caucasian boys and girls who had been convicted of a crime were eligible to stay at this new facility for a year.  Called by some “the city’s orphanage,” residents’ days involved a strict schedule of studying academic and religious topics and learning trades (Fro more, see Kopaczewski, http://philadelphiaencyclopedia.org/archive/house-of-refuge/).  In 1849, on the same campus, a separate building opened for African American youth.  The House of Refuge was the forerunner of the current Glen Mills Schools.

In conclusion, while incarceration and its presence in our city’s past and present may not be a topic that we spend much time considering, unless it touches our own family, we can learn a great deal about the complexities of how we manage those whom we have judged to need punishment.  We can continue to ask questions about how Philadelphia and the United States overall compare with other international standards with sources such as this one: http://www.unodc.org/newsletter/en/perspectives/no02/page004a.html.