The Mystery Bones of Philadelphia & Their Discovery in 1896

The Mystery Bones of Philadelphia & Their Discovery in 1896 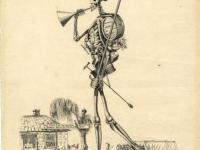 The Philadelphia area of the Delaware Valley, like other parts of the country, has its own archaeological  or paleontological mysteries.  Peter Kalm, the famous Swedish botanist, in his Travels Into North America, visited Pennsylvania, New Jersey, New York and parts of Canada in 1748 & 1749, wherein he recorded a number of enigmatic discoveries. He noted everything from copper tools, mines, to that of wells, walls, and burnt bricks, found many feet below the surface of the earth, antedating the arrival of Europeans.

Also, John Fanning Watson, the early antiquarian & folklorist of Philadelphia, gives a number of accounts within his famed Annals of Philadelphia and Pennsylvania, published in the early 19th century, of well pits, pebble pavements, petrified trees, bones and other objects found many feet below the surface, located throughout the city of Philadelphia.

A specific mystery, is contained in the local newspapers of Philadelphia, particularly that of the Philadelphia Inquirer, for May 12, 1896, as found in an article entitled, “Giant Animal’s Bones: Curious Skeleton is Unearthed in a West Philadelphia Quarry.”  The story states that workmen at Fifty-Fifth Street and Wyalusing Avenue, at the Pemberton’s Stone Quarry, were blasting and uncovered a cavern, which “ran back underground some thirty feet.”  At the cave or tunnel’s end, “stood a skeleton,” which was “not unlike a mammoth,” with “four great tusks” and a number of large teeth, along with a bones lying nearby, which “looked like a human skull.”

The above article goes on to attest that scientists from the Wistar Institute (which still exists today at the University of Pennsylvania), but more specifically its Curator, “Dr. Milton Greenman” (1866-1937),  had visited the cave, examined what was left of the bones (many having been carried off as souvenirs by the public), and declared in his belief it was too small to have been that of a mastodon, perhaps “a large bear,” though “in many respects the animal looked like a rhinocerous.”  The human skull, in his estimation being “that of an Indian,” both creatures having lived roughly four to five-hundred years ago.

More mysteriously atlases or maps of the time, do not show a Pemberton Stone Quarry at 55th and Wyalusing, neither have any papers survived of Dr. Greenman for 1896, either from the University of Pennsylvania’s Archives nor at the Wistar Institute.  Neither does the Academy of Natural Sciences appear to have any data concerning the discovery as well.

Naturally, scientific hoaxes were prevalent and published frequently within the nation’s newspapers during the 19th century, but the article in question is quite specific in its location, persons involved, as well as theoretical interpretation of said artifacts. Nothing is recorded in regard to any one receiving any gain or profit from the discovery.

Some two months later in late July of 1896, a number of papers, both in and out of the state, recorded how, “the skeleton of what is reported to be a small mammoth,” was unearthed in West Philadelphia, along with the skull of an Indian, both of whose remains were sent to the “Wisconsin Institution,” no doubt a misprint or error for the Wistar  Institute. After that, the story goes cold. I leave it up to the reader to perhaps uncover any further information about the whereabouts or exact definition of what was actually found if anything and share it with the author and our readers-at-large.