A Little Known Activity of the Pennsylvania Abolition Society

A Little Known Activity of the Pennsylvania Abolition Society 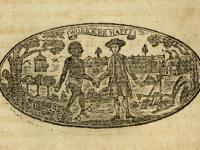 The Pennsylvania Abolition Society was founded in 1775 by a group of mostly Quaker men in Philadelphia. Originally called “the Pennsylvania Society for the Relief of Free Negroes Unlawfully Held in Bondage,” the group’s primary mission at that time was to render aid to free people of color who had been wrongfully enslaved.

The papers of the Pennsylvania Abolition Society are on deposit at the Historical Society of Pennsylvania. One can assume that the collection solely concerns the freeing of African Americans during the 18th and 19th centuries. However, there is a relatively unknown portion of this collection that describes the actions of the Barbary States in North Africa. Preying on European vessels for centuries, pirates from the Barbary States began capturing American ships and their crews during the late 18th and early 19th centuries.

On July 30, 1785, Algerian Muslim pirates captured the Philadelphia ship Dauphin and enslaved its crew. The Dauphin’s crew, along with thousands of other enslaved Christians from Europe and America, suffered death, starvation, and abuse in North Africa for many years. Additional incidents with the Barbary pirates escalated to such a degree that in 1788 members of the Pennsylvania Abolition Society appointed a committee to: “Consider reports on the Case of our fellow Citizens now in Captivity in Algiers…that this subject calls for the attention of every friend of liberty and humanity and particularly of this Society whose declared objects are the mitigations of the rigours of Slavery, and the total abolition of that unjust and cruel practice…” 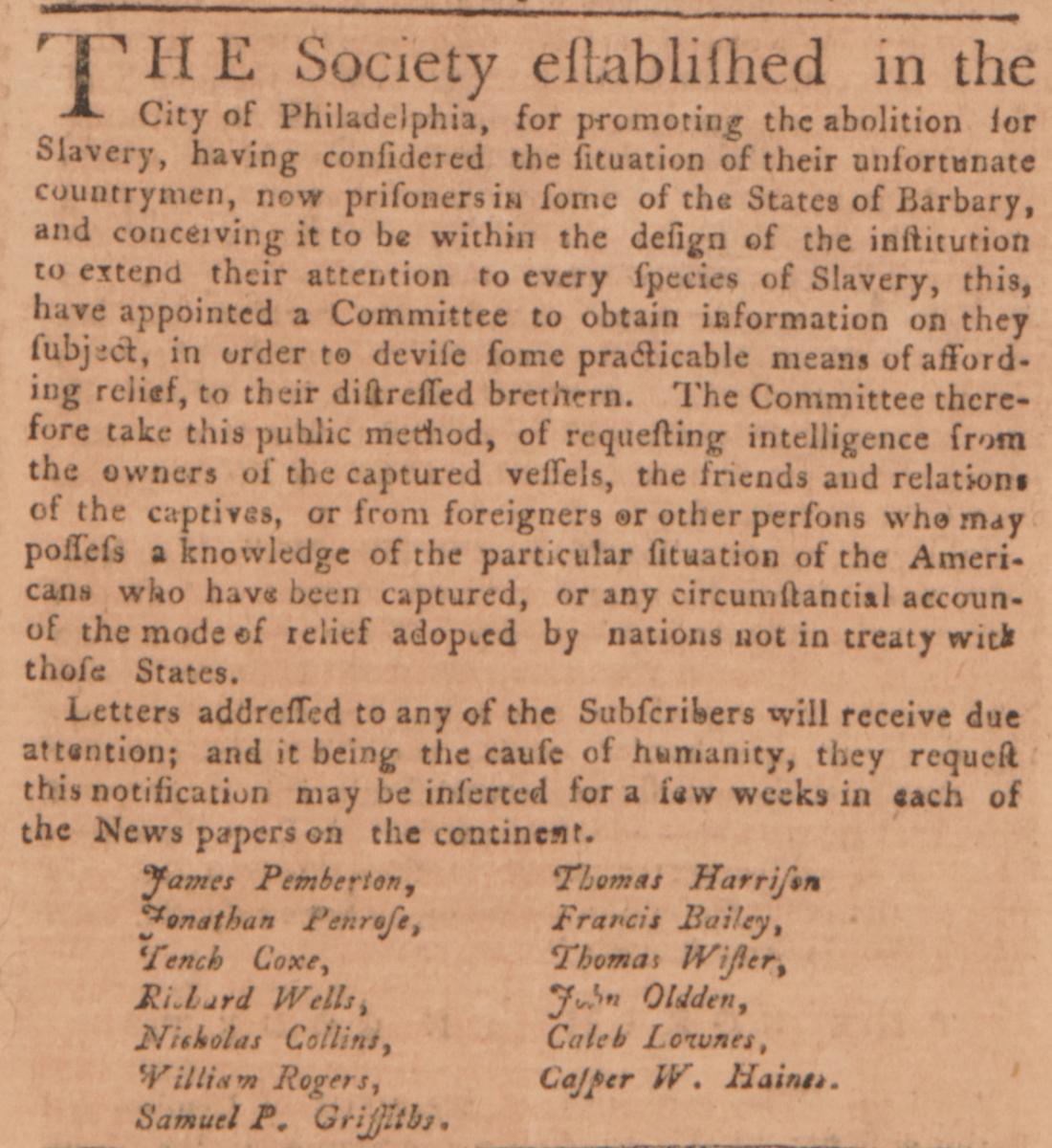 endeavor to obtain information concerning the American Prisoners captured by the Cruisers, of any of the States of Barbary…” The thirteen members of the committee (a “Who’s Who” of the day) were published in the Philadelphia newspaper, the Pennsylvania Journal, on July 8, 1789. They were: James Pemberton, Jonathan Penrose, Tench Coxe, Richard Wells, Nicholas Collins, William Rogers, Samuel P. Griffiths, Thomas Harrison, Francis Bailey, Thomas Wister, John Oldden, Caleb Lownes, and Casper W. Haines.

The minutes of the Pennsylvania Abolition Society go on to emphatically declare that: “proper measures be immediately taken by this Society, to obtain information of the late places of abode, names, numbers, and real situation of the Citizens of America now in Captivity in the States of Barbary…Subscriptions under the care of this Society be opened in the several States in the American Union for the purpose of obtaining the Funds which may be necessary to administer such relief as their Situation may require….” 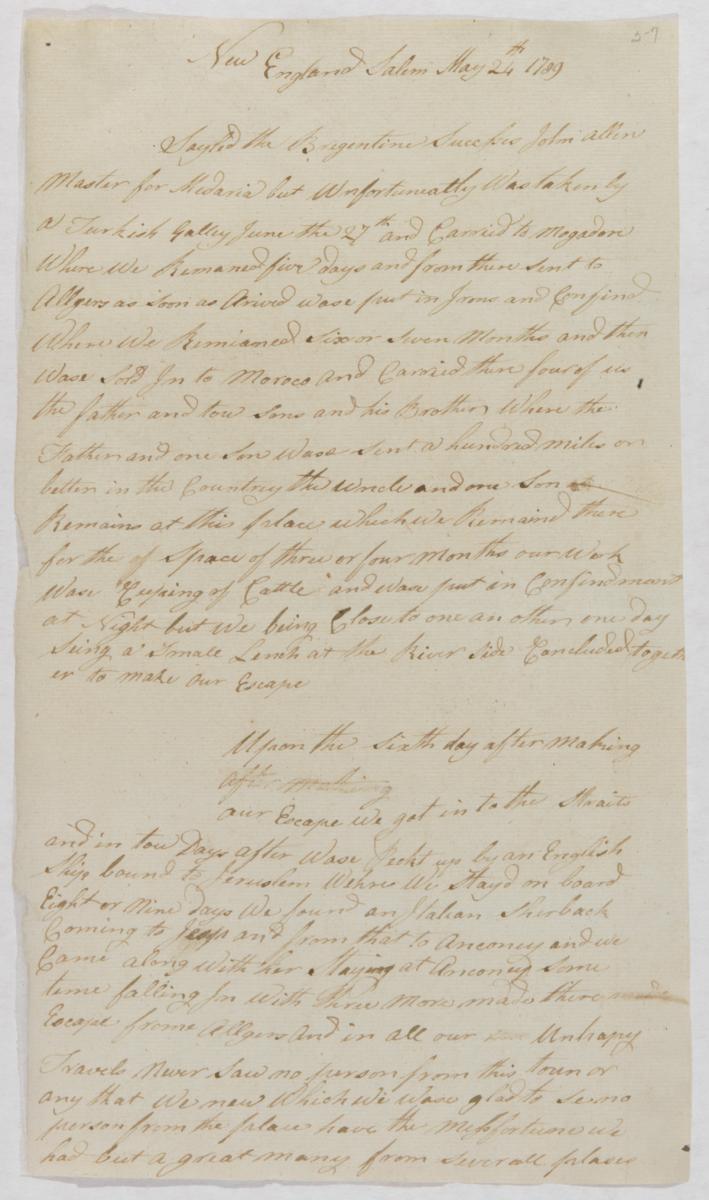 Among other correspondence concerning the acts of the Barbary pirates is a letter dated May 24, 1789, written in Salem, Massachusetts, which recounts the tale of crew members of the New England Brigantine Success who were captured by a Turkish Galley and later escaped. This can be found in the Loose Correspondence, Incoming: 1784-1795 of the Society’s papers. Additional material can also be found in letters from July 1789 written by John Skey Eustace, who had served as a Major Aide-de-Camp to a number of American generals during the Revolutionary War.

The Pennsylvania Abolition Society worked toward the permanent destruction of slavery in all its forms, not only for those Africans enslaved in the Western Hemisphere, but also for those white Americans taken by the Barbary pirates. Subsequent actions in North Africa would later be referred to as the Barbary Wars, or “America’s first war on terror,” a conflict carried out under three American presidents. Many references exist within the Pennsylvania Abolition Society Papers on this important issue and should be examined in greater detail by scholars who continue to examine the broad subject of slavery in American and world history.

I am wondering whether the society had anything to do with the ships bearing hundreds (thousands?) of former slaves from Maryland and the Washington, DC area? These were taken to Santo Domingo/Saint Domingue then under the control of Haiti's Boyer.
The year was 1823 or 1824...They were led by a Dutch pastor named Peter van der Horst.