A Nineteenth-Century Christmas in Words and Illustrations

A Nineteenth-Century Christmas in Words and Illustrations

The Christmas holiday season has generated much interest from both a personal and commercial perspective within the United States for many years. What is considered to be the first illustration of Santa Claus descending a chimney with a ba 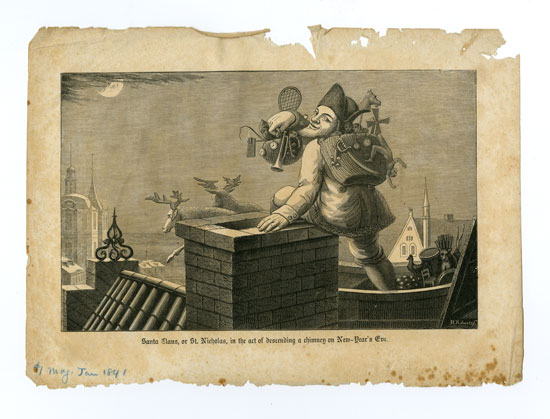 g or sack full of toys was printed in the January 1841 issue of the New York City weekly newspaper, the New York Mirror (1823-1842). The picture was drawn by Dublin-born portrait-painter Charles Cromwell Ingham, was then made available in print through the efforts of a wood engraver, Robert Roberts, an immigrant from Wales.

Christmas cards have been around for quite some time. William Egley Jr. of Great Britain has received credit for creating the oldest card in 1843, though many early versions appe 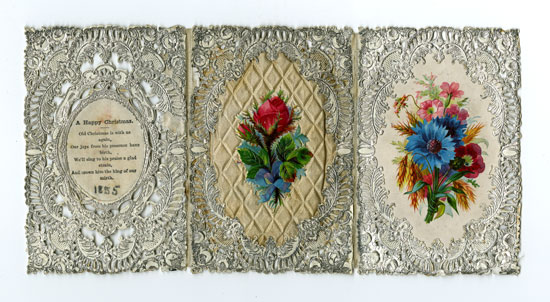 ar to stem from Valentine cards, whose origins can be traced as far back as the 15th century. Poems or verses, along with graphic illustrations, have been a major part of Christmas cards.

Christmas is a time that brings families together.  In a letter written in 1842, a woman named Mary in Montrose, Pennsylvania, recalled to John, how "... (Christmas Eve), you know, when St. Nicholas fills the stockings of good little children, Bubby held the candle while I drove a nail by the fireplace, he then hung up his stocking, and went to bed...As soon as he was awake this morning...I wish you could too could have seen him as he drew parcel after parcel, from the stocking--carefully inspected the contents, and then laid it aside for the next."

William R. O'Donovan, writing to his sister from New York City on Christmas Day in 1871, stated: "This is Christmas night...A night that brings to all our minds the recollections of our childhoods, with what a keen zest we all used to look forward to Christmas for weeks before, with anticipations of what Santa-Claus would bring us. And how our eagerness to see the contents of our stockings, drove all sleep away.  It may seem foolish, at this time of life to recall such reminiscences. But I am glad...I am still able to recall with pleasure the halo of brightness that always lent to this day such a sweet enjoyment to our youthful minds. May none of us ever grow old enough in Spirit to forget these early, happy, times in the morning of our lives...."

Mr. O'Donovan later writes to his mother on Christmas Day in 1876 lamenting the plight of the poor in New York City. "I have seen fair young girls, who have never known the want of a luxery, {sic} in filthy tenements, ministering to poor sufferers, with the self forgetfulness, and gentleness of angels...How then can I call this a hard and heartless world? It is full of beauty, and truth, and love; if we will but try to find it...."

In the 19th century and today, Christmas has brought joy to many souls, in both picture, poetry, and memory, much of which is available within the collections at the Historical Society of Pennsylvania.