A Philadelphia Connection to the Wild West

A Philadelphia Connection to the Wild West 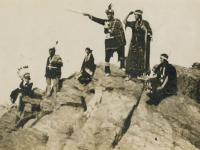 Though most people are familiar with Wild West characters such as showman Buffalo Bill Cody and sharpshooter Annie Oakley, far fewer have heard of famed theatrical promoter Gordon William Lillie, known as Pawnee Bill, and his Philadelphia connections. Lillie was born in Illinois, but he spent time living in Philadelphia and organized numerous Wild West shows in Harrisburg. (Officials in Harrisburg recently sold off a number of artifacts related to the Wild West.) Lillie, along with various tribes of Native Americans, Bedouin Arabs, and gauchos from Argentina, thrilled crowds with their own version of Wild West heritage.

While residing in Philadelphia, Lillie married 17-year-old Mary Emma May Manning at her parents’ home in 1886. May Lillie became an extremely significant part of her husband’s show, acting the part of sharpshooter and equestrian rider, similar to the famous Phoebe Ann Moses or Annie Oakley.

Lillie recruited Indians to participate in his shows, and this was not without controversy. During August of 1891, Lillie, who was living in Philadelphia at the time, wrote several letters to Herbert Welsh, corresponding secretary of the Indian Rights Association, concerning 14 Winnebagoe Indians from Wisconsin.  According to some accounts, the Winnebagoe Indians had worked for Lillie for 10 weeks without pay, and they complained Lillie was retaining “beads and clothing belonging to them.” However, Eagle Eye, an interpreter for the troupe, remarked how certain members of the group were paid regularly and given a receipt but “would go out and get drunk, and would be unable to perform their work in the show.” Incidentally, those accused did not reside on a reservation like the others but were citizens of the United States. 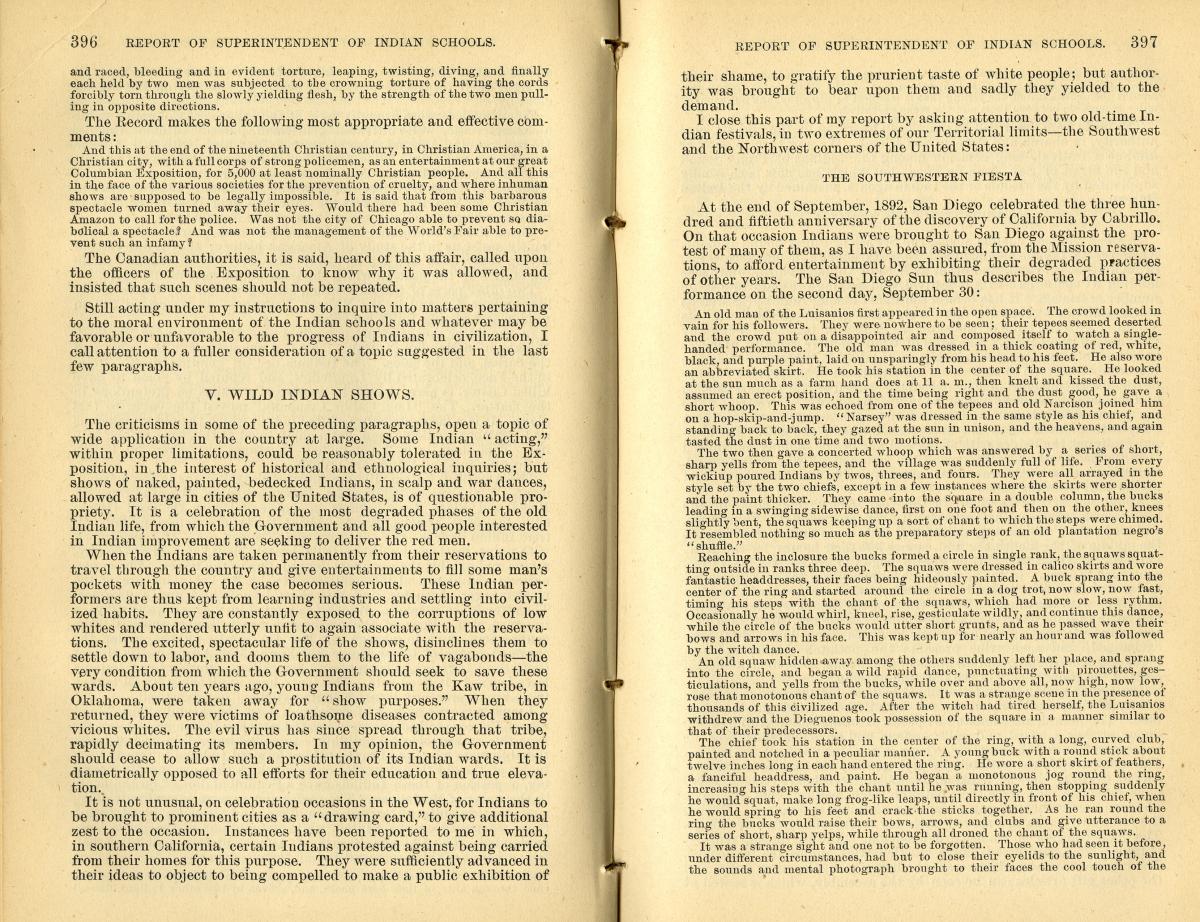 The Sixty-Second Annual Report of the Commissioner of Indian Affairs in 1893 (pictured at left) criticized the use of Indians as actors. According to the report, “the Indians are taken permanently from their reservations to travel through the country and give entertainments to fill some man’s pockets with money.” The report remarked how some young Indians of the Kaw tribe of Oklahoma had been “taken away for show purposes” and returned as “victims of loathsome diseases contracted among vicious whites.” However, Pawnee Bill (or the Hero of Oklahoma as he was also called) continued to receive authorization from the government to take Indians off the reservation for show purposes.

On March 20, 1894, Lillie received authorization to take a group of Indians from Rosebud Reservation or Lakota Sioux from South Dakota to the Antwerp Exposition in Belgium. The Red Star Line steamer Illinois took 25 Sioux Indians to Belgium on April 25, 1894, and arrived back in Philadelphia on August 17 of that same year. Records listing the names of the party are found in the passenger arrivals, available at the Mid-Atlantic Branch of the National Archives in Philadelphia. However, not everything went as planned. 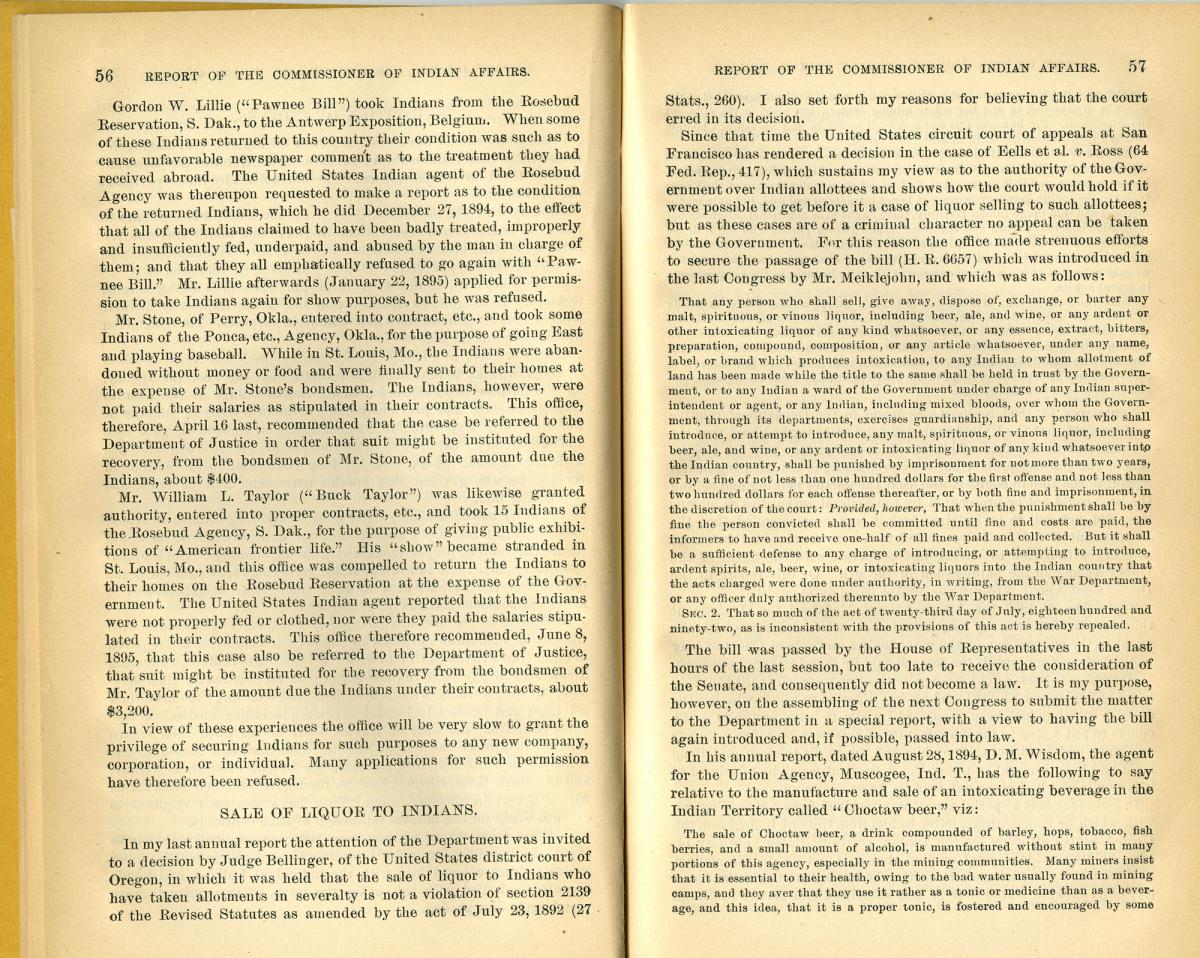 The Annual Report of the Commissioner of Indian Affairs for 1895 (pictured at right) stated that the Indians, upon their return, brought “unfavorable newspaper comment as to the treatment they had received abroad.” Local newspaper accounts such as those printed in The Philadelphia Inquirer on August 1, 1894, remarked how an Indian papoose named Red Star was born at sea soon after the vessel left port to an Indian named Walking Woman. The mother became sick and died, and was quietly buried at sea despite her husband’s belief she would be taken back to “the Western country” upon their return from Europe. Another account dated August 18 stated how an Indian named Squaw Holy Blanket was forced to abandon her sick 6-year-old child and return to the United States due to her own failing health.

The United States agent in charge of the Rosebud Reservation later made an official report dated December 27, 1894, attesting that “all of the Indians claimed to have been badly treated, improperly and insufficiently fed, underpaid, and abused by the man in charge of them; and that they all emphatically refused to go again with Pawnee Bill.” Still Lillie attempted once again and applied to the government to take Indians abroad for show purposes. This time he was refused.

Though Pawnee Bill and his Wild West Show was popular for a number of years, Lillie eventually retired to Pawnee, Oklahoma, where he died on February 3, 1942. His wife became an ardent supporter for the preservation of the buffalo and starred in her own movie.

Wild West shows, like the American frontier, eventually became a thing of the past. However, they helped maintain an interest in the history of Western America and its inhabitants that has never waned.