Francis Hopkinson and the Constitution

Francis Hopkinson and the Constitution 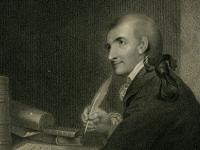 Hopkinson was a man of remarkable talents and achievements especially within the political, artistic, and literary arena. He is often given credit for designing the American flag, the official state seal of New Jersey, as well as seals for both the American Philosophical Society and the University of Pennsylvania. Like a number of the other signers, Hopkinson was also a slaveholder.

In Bordentown, New Jersey, Francis Hopkinson married Ann Borden (granddaughter of the town’s founder) in 1768. He almost immediately became involved in legal and community affairs, and by the time of the Revolutionary War was writing such ballads as the “Battle of the Kegs” (1778) to commemorate the use of mines in warfare and to rally Americans to the cause of freedom. One author compared him to the famous Thomas Paine “in prose and verse.”

An accomplished painter, poet, and influential judge, Hopkinson was a staunch advocate of the Revolution and American independence. He was instrumental in the ratification of the American Constitution as well. One of his most famous writings in support of its ratification is a poem and an allegorical essay titled The New Roof, which was published in the Pennsylvania Packet on December 29, 1787.

In The New Roof, Hopkinson describes a group of “skillful architects” who had discovered the weakness of “a certain mansion house,” which was composed of 13 rafters (representing the colonies under the Articles of Confederation.) The rafters were in such a sorry condition that they needed to be repaired. He ends his essay with a descriptive analysis underscoring the need to ratify the Constitution. He writes: “Figure to yourselves, my good fellows, a man with a cow and a horse—oh the battlements, the battlements, they will fall upon his cow, they will fall upon his horse, and wound them, and bruise them and kill them, and the poor man will perish with hunger.” The architects of the new structure (Constitution) would save both the building and the man’s possessions.

Regrettably, this enthusiastic American patriot was struck, or “seized with an apoplectic fit” as Dr. Benjamin Rush termed it, on the morning of May 9, 1791, and died shortly thereafter. He was buried at Christ Episcopal Church in Philadelphia, leaving his widowed wife and posterity along with the public and his fellow statesmen. Hopkinson left a great legacy both to them and the nation with his unselfish efforts toward establishing American independence and creating a working government still viable in today’s world.

Among the many treasures of the Historical Society of Pennsylvania are two handwritten drafts and four printed documents that trace the genesis of the new form of government proposed by the Constitutional Convention. You can view these documents online.