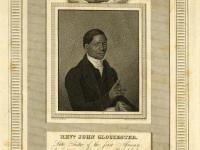 Many people are familiar with the contributions to early American religion by such African-Americans as Richard Allen and Absalom Jones. However, fewer are acquainted with the name of the Rev. John Gloucester and his life and contributions to the Presbyterian religion, primarily in Philadelphia, from 1807 until his death in May of 1822.

John Gloucester, or Jack as he was originally known, was born sometime enslaved during the early years of the American Revolution in Kentucky.  He was later purchased by Gideon Blackburn of Tennessee, a Presbyterian minister and ardent evangelist among the Cherokee Indians. Through legislation in Tennessee, Blackburn was able to not only free Jack, but to have his name changed to John Gloucester and successfully authorize him to preach the Presbyterian faith “to the Africans.” Therefore, as early as 1807, the Presbytery of the Union Synod of Tennessee had recommended to the General Assembly at Lexington, Kentucky, that a “slave should be licensed to preach among colored people.”

The Rev. Archibald Alexander, a native Virginian, preached the tenets of the Presbyterian faith in Philadelphia as early as 1796, and is often given the credit for the creation of the First African Presbyterian Church in the city in 1806. By 1807, John Gloucester was street preaching in Philadelphia on Sundays at Seventh and Shippen Streets, but without a license to do so. In 1810, Gloucester returned to Tennessee and obtained his license to preach and was ordained as a minister. He was ordered to return “as soon as possible to repair to the city of Philadelphia.” He did so, and became a member of the Presbytery of Philadelphia on April 16, 1811.  In regards to his character, he was referred to specifically as being a man of fair morals and upright conduct, a good Christian. He had been the first African-American to actually attend Greenville College in Tennessee, where Blackburn was a trustee.

During Gloucester’s time preaching in Philadelphia, the former slave was also attempting to free his wife Rhoda and their four children, who were still being held in bondage in Tennessee. Luckily he had many good friends and supporters, and was able to raise $1500 which was used to free his family from slavery.  By June, 1810, they were brought by wagon from Tennessee to Philadelphia by Gloucester’s former master, Gideon Blackburn.

Through the efforts of Rev. Gloucester, many individuals joined his congregation, and in 1810, a lot located in the Philadelphia section of Moyamensing was donated, followed by the 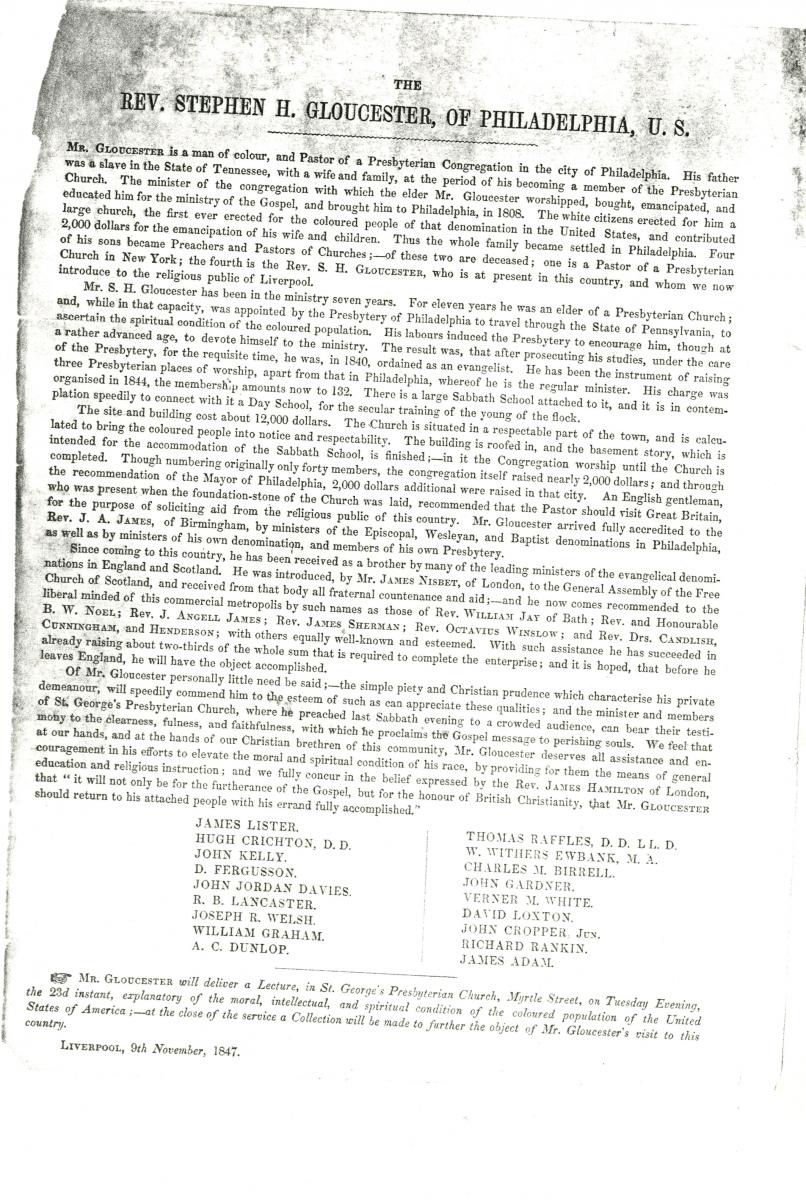 erection of a school-house where the services of the African Presbyterian Church were held. The congregation quickly grew too large for the schoolhouse and on May 31, 1811, a new brick building was constructed on Shippen Street (present day Bainbridge) below Seventh. Most of 123 members of the congregation were very poor and could not afford to pay officially for a pastor, though Gloucester served in this capacity until his death from tuberculosis in 1822.

One of John Gloucester’s sons, Stephen, who had been born enslaved like his father, eventually became a Presbyterian minister as well, taking over his father’s position for a time. The First African Presbyterian Church in Philadelphia commemorated its 190th anniversary, in May of 2002.

Does anyone (perhaps the writer of the piece
on Gloucester) know of links to the Rev. John
Rankin of Tennessee, later of Carlisle, Ky, and Ripley, Oh, or of Blackburn's links to revivals of
the period? Thanks. RH