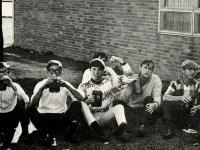 “When I talk with a genealogist, I seem to sit up with a corpse,” Ralph Waldo Emerson spat in 1855.

The 'Sage of Concord' may not have been a fan, but I'd argue that the study and tracing of lines of descent is certainly more scintillating than a cadaver. That it is now a $1 billion+ industry speaks for itself.

Undated portrait of author Ralph Waldo Emerson. From the Simon Gratz collection [0250B]

The exponential increase in genealogy's popularity in the past few decades – with the modern upswing commonly traced to Alex Haley's Roots and broadband Internet – is not simply a function of retirees armed with smartphones and disposable income.

Instead, genealogy's current prevalence speaks to a swelling – though far from unprecedented – desire to moor ourselves to something (our heritage) or to someone (our ancestors).

Perhaps more interesting than any one family's history is what genealogy reveals about genealogists themselves and their orientations to the past and future.

What does this say about our sense of identity? What is it that we hope to discover about our ancestors and – in the process – about ourselves?

The vast majority of genealogists I've encountered are seeking something far more than a comprehensive pedigree chart. Instead, they are trying to put "meat on the bones," to reconstruct the social histories surrounding their ancestors.

Over the past few years, DNA testing kits have become the go-to for many genealogists as they begin their research. For experienced genealogists, these tests often help break down "brick walls" when searching for, say, the village of your ancestor's ancestor.

Don't get me wrong: These kits are clearly helpful, but they don't get to the heart of the matter. DNA breakdowns do not reveal our ancestors' personalities any more than a seismograph reveals the cause of earthquakes.

What should we consider before investing in the latest cheek swab wizardry?

For those on a librarian's salary, a much cheaper solution is to chat up your parents and grandparents as best as you can, to start with them and work your way backwards.

With characteristic grace, HSP's collections guru Lee Arnold recently addressed the need to take advantage of those living links when possible, such as at family gatherings during the holidays.

But this is not a cure-all, as my recent foray into genealogy demonstrated.

Diving head first into my family's history put in plain evidence the need for learning about the craft of genealogical research. This led me to consider the upcoming Researching Family in Pennsylvania course (and I encourage you to, too.)

(As per a rite of passage for all genealogists, I will now try my best to put you to sleep with my own family's history.)

The child of parents who waited a very long time to have children – compared to their generational cohort – I am a 27-year-old without any living grandparents. My folks are nearing 70. Our 13-year-old yellow Labrador is perhaps willing but ill-equipped to fill me in.

Compounding this is my parents' tendency to (biographically) under-share.

Often we don't "know" our folks as individuals. They are less (given name) and (given name) than simply "Mom" and "Dad."

For me, this was driven home recently by my father's fiftieth high school reunion, which prompted the digitization of his high school year book.

There he is, flexing, in then-trendy white Levi's and a Christmas sweater, the leader of "The Punch-for-Lunch Bunch."

The image struck a resounding chord because – exactly 50 years later – I had unwittingly adopted a similarly ridiculous pose.

At first, I thought this lent credence to Lamarckian inheritance of acquired traits. In this case, a predilection for faux machismo.

But what really hit home was not his youthful vigor and bicep bluster (he was a sedate, gray-haired academic by the time I arrived on the planet).

Instead, it was the stark difference between this image and one I had seen as a kid: my pops' Fort Dix boot camp "yearbook" photo.

Even though the pair of photographs had been snapped barely a year apart and both depict my father, the faces staring back at me looked like they belonged to two different people.

I wondered what he would think today if presented with both pictures. Would he recognize himself in each one, or would both seem utterly unfamiliar?

Many parents – including my own – aren't inclined to discuss their pasts for a multitude of reasons, even if you manage to wrangle them around the holiday dinner table.

In these circumstances – with parents and grandparents removed as possible sources – aspiring genealogists are stymied from the get-go.

That I was able to find anything else out about my folks was a lucky break represented by loose-lipped extended relatives.

As far as my father's early life goes, much of what I've been able to reconstruct is thanks to the efforts of his sister who – despite her career at CSX – would make for a great archivist.

She presciently kept many of my father's records, which – I assume – he forgot about or assumes no one would bother pestering his sister to find and fax.

Little did he know.

The son of an Italian ballerina and a Bavarian handyman, he grew up in Erie, PA like many other children of Baby Boomers - with a street chock full of enough kids to field two baseball teams, which they played in an unaware farmer's field.

Graduating from high school in 1967, he didn't enroll in college to pursue a spot on the U.S. Olympic swim team.

His number was up by the end of the summer.

He tested into Army Special Forces, learned both Russian and Chinese at the Defense Language Institute Foreign Language Center, and was subsequently sent to Thailand as part of a clandestine operation to intercept and decode short-wave radio transmissions.

So secluded were they that he and several of his fellow "crypies" – short for "cryptologists" – suffered from scurvy.

Fresh fruit – and all rations for that matter – were only deliverable via airdrop. These supply missions were far from always successful, for obvious reasons.

While I grew up vaguely knowing he served in Vietnam, my father only ever explicitly revealed two things about his wartime experiences.

The first was that he accidentally shot an orangutan. This is patently false. Neither Pongo abelii nor Pongo pygmaeus are found in that part of Southeast Asia.

The second was that he escaped "KP" duty by playing drums in the Army band. I could not confirm this with requests from the National Archives.

Which made the cache of documents from my aunt all the more essential.

One document in particular was a gut punch. Written by Charles J. Denholm – commanding officer of what would become the U.S. Army Intelligence and Security Command – the letter commends my father for charming his British spymasters during cryptography school at GCHQ in Cheltenham, England.

In all those afternoons watching and re-watching Dr. No and Her Majesty's Secret Service together, he never once thought to mention this. To this day, I'm confident he believes these two bits of information – the primate homicide and percussion privilege – are all I know about his wartime service.

I am not so untoward to let him know otherwise. I am happy to play the fool. For those readers with similarly self-contained parents, this needs no explanation.

In any case, that period of his life is a half-century removed. He is now a bespeckled practitioner of the "dismal science" and a guitar collector.

But through genealogical research, I feel as if I now know him more as a person – as "Charles" – rather than simply as "Dad." I imagine this is a feeling common to many genealogists.

Your correspondent and his father, ca. 2015.

Mercifully, my mother did not practice the same sort of slash-and-burn record keeping as her spouse, though she was equally tight-lipped when I tried (not subtly enough, it turned out) to inquire about her childhood.

Again, an extended relative saved the day, this time her younger brother.

My mother's early life was no less trying. She grew up in what was then the poorest county in the country. Both JFK and LBJ visited and were shocked at the region's poverty and lack of educational, medical, and civil services.

Both vowed to change things. Both failed.

Not unlike many readers' parents, these material challenges did not stop her. She neither needed – nor waited for – a hand-up.

One of five children supported by an itinerant laborer, she twice read every book at the local "library" (a pickup truck with books hauled to town every Sunday from an affluent city 60 miles away).

She graduated valedictorian before becoming the first in her family to attend college. She put her way through by hawking theater costumes.

Four decades later, she is still introducing the joys of reading and learning to five-year-olds. Many of her recent class rosters include the children of her inaugural students, which is perhaps the highest compliment a teacher can be paid.

Your correspondent's mother as a senior in high school ca. 1976. Nicknamed "Bubbles" due to her indefatigable optimism and preternaturally youthful looks, she still finds time each week to scold your correspondent to cut his hair.

Genealogy, because it deals with families, is as complicated as the relationships that characterize connections between people both within and across generations.

It is messy, filled with feints, miscues, and impacted by memory loss and purposeful withholding. Often we find ourselves in a genealogical cul-de-sac of brick walls capped with dead-ends.

But that doesn't stop us from wanting to learn about where and whom we come from.

We try to make sense of those that came before us, what they experienced during the social and political upheavals often disembodied in history books we read at school.

We cannot help but wonder if we are as resilient as them, as well-equipped to surmount similar obstacles. We wonder if we're made of the same "stuff" that allowed them to triumph through enslavement, or famine, or political oppression, or uprooting their lives and starting anew in a strange, often hostile country, or – in the case of many families – all of the above.

Your correspondent's maternal grandfather, Davido, at 18-years-old, ca. 1950. A first generation immigrant and the only of five siblings to survive infancy, he once described his childhood as "just like the film Grease, without all that dancing."

That we are here is a testament to their strength and their perseverance.

But this is what I'm curious about exploring: The ways genealogy often reveals more about the genealogists themselves than the individuals they are researching.

What is it that we're hoping to discover about our ancestors, and what do we hope this will reveal – ultimately – about ourselves?

Your correspondent and his sister in front of their Olde Kentucky Home, ca. Easter 1995. (It's a clip-on)

This post was written by guest contributor Gene O'Lowgee. He will be exploring these topics and more in this one-in-an-occasional series.

Researching Family in Pennsylvania, a week-long genealogy course designed to explore and explain the records and repositories available to family historians researching ancestors in Pennsylvania, will take place at HSP July 31 - August 4, 2017.

This course is designed for all levels of genealogical exploration, from those beginning to research their family history, to the advanced genealogist. Click here for a detailed curriculum and instructor bios.