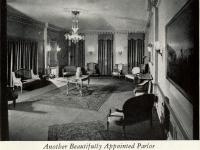 In 2015, The Historical Society of Pennsylvania (HSP) launched HSP Encounters, a new digital resource comprised of an ever-growing number of genealogical and biographical databases.

HSP Encounters is an ongoing project in which records and materials deemed of high research value are digitized and made available to HSP members online, in searchable form. Historical essays incorporated in the system describe each database as well as establish historical context for the records contained.

To highlight the databases in HSP Encounters, we'll be featuring historical essays describing the database's context and contents on Roots & Branches. This essay, written by Matthew McNelis, looks at the Oliver H. Bair Company records database.

HSP Encounters is available to all researchers while inside the Reading Room. Remote access is a benefit of HSP membership. HSP also offers a Research-by-Mail service, with professional researchers delving into the collection in reponse to specific queries, as well as a Rights & Reproduction service for those wanting an archival-quality print of HSP's collection materials. HSP members receive 40% off Research-by-Mail requests & 10% off archival prints.

The Oliver H. Bair Company was founded in 1878 with the intent to offer the best service possible for families that had to make funeral arrangements for their deceased loved ones. Originating at 41 North Eighteenth Street in Philadelphia, the funeral home's most well-known location was at 1820 Chestnut Street, and it now operates from 8500 West Chester Pike in Upper Darby, Pennsylvania, as a member of Oliver H. Bair Company & Monaghan Funeral Home.

Oliver Bair founded the Oliver H. Bair Company with the idea that funeral services needed to be implemented with more compassion and concern from those who were arranging the funeral. Mr. Bair strove to improve the quality of caring and service that families received when they needed to make funeral arrangements for their loved ones. Under this ideology the Oliver H. Bair Company was established in Philadelphia, Pennsylvania. The 1820 Chestnut Street location was added to the National Register of Historic Places in 1982.

Access to the records from 1920-1980 are via 5x7 index cards. These cards were digitized and electronically indexed through an agreement between Ancestry.com and the Historical Society of Pennsylvania. Copies of the original records may be obtained via HSP’s Research-by-Mail service (researchbymail@hsp.org).

My great grandfather was buried in feb 1919 they this funeral home. Any idea where I can find his records. Please let me know @ tmkelly113@gmail.com

You may want to make use of our Research by Mail or Ready Reference services. More info here: https://hsp.org/collections/library-services/research-by-mail

My great great grandfather is Floyd Emerson Kerr. He was born in West Virginia and died in South Jersey on Friday June 11, 1954. I know he was layed out at Wm. F. Cushing's at 1807 Pine Street in Philadelphia on Wedesday June 16, 1954. He's buried at St. John's Lutheran Cemetery in Williamstown, NJ. His wife is wife is Fannie Ellen Molisee Kerr and is buried with him. Any info on who is parents are listed as on his death certificate would be so incredible.

Thanks for getting in touch! You're probably best either arranging for Research By Mail (if you're unable to physically make it to HSP) or contacting our Ready Reference desk for answers to your questions. More information can be found here: http://hsp.org/collections/library-services/research-by-mail

HSP Encounters is made possible by the generous support of the George C. & Esther Ann McFarland Foundation.

Roots & Branches is our blog about genealogy and family history. Here you'll find posts about new resources in our library, upcoming events and workshops at HSP, and much more. We look forward to helping you learn more about your roots!