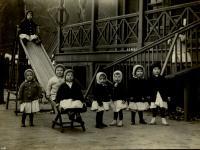 This lesson is meant to allow students to read the case files of various orphans from the Children's Aid Society. These files are meant to help today's students understand childhood in the late 1800s as well as to show students the issues that immigrants and minorities faced while trying to build a life in Philadelphia.

Similar to other organizations founded in the Progressive Era, the Children's Aid Society (CAS) was founded at a time when middle class reformers began to raise concerns about the high rates of infant mortality.  At Hull House in Chicago, a group of female reformers--Julia Lathrop, Florence Kelley, and Jane Addams—lobbied for the creation of the Children’s Bureau in 1912, which collected statistics on infant mortality and provided mothers with advice on caring for infants.  Before the Bureau, the CAS in Philadelphia faced the problem with little reliable information, but rather a hunch, that providing sick infants with a good home could save them. Joseph Bosley entered the CAS at two months old in a condition of starvation from drinking condensed milk.   That the two year old survived, though born to a poor African American widow and very ill, was likely in no small measure a result of the Children’s Aid Society of Philadelphia.

Emma and Martha McHenry, seven and nine years old respectively, entered CAS care in 1883.  CAS placed the girls in foster homes, but the girls struggled under the Society’s care.  At the time ,reformers worried that poverty was a genetic defect that could be passed on to offspring.  This idea was particularly strong among those who thought that with girls could easily and readily follow their mothers into lives of crime—such as prostitution.  Martha described as deaf, lived in one home until she was 20; her sister, Emma, lived in six different homes in New Jersey.  Both worked as domestics in their home; both came to resent CAS as intrusive.

There is also the story of Charles Harvey, a thirteen-year-old foster child, who was killed by a train.  His foster family in Skinner’s Eddy, PA, received a check for $29 from the Lehigh Valley Railroad to bury Charles.  At this time, the Victorian concept of childhood was emerging that believed children were innocent and “priceless” and should be protected from the world of adults.  Yet, the case with Charles’ foster family tells a different story—one of the limits of this notion of childhood - in which poor children’s value could still be measured and paid off.

Due to prejudice and limited work opportunities for their parents, children of color often wound up at the doors of the CAS.  In 1897, eight-year-old Genevieve Farrell, fell under the care of the CAS—so too did her younger sisters, Gertrude and Maud.  Their father’s whereabouts was unknown, and their mother worked as a fortune-teller—until she was institutionalized.  Of Maud, nothing is known, but Genevieve and Gertrude, though by all accounts good girls and happy, were moved from home to home, as white families took them in but then began to suspect the girls were not white.  Each time, the girls were returned to the CAS with a request that they be placed with African-American parents. Also, Madison Ulysses Ayles came to the CAS when he was around eleven years old.  Over the next few years, Ayles ran away from four different adoptive families---all white.  That is until, the young African-American boy wound up in the Avondale home of a black minister, Isaiah Watson, where he stayed comfortably, before he transferred to another African American family.  Perhaps Watson and Mr. and Mrs. Albert Lewis provided “a cultural sanctuary and parental guidance in dealing with racial prejudice.”

Studying the CAS case files allows us to learn about the treatment of children with disabilities.  When, in 1898, Samuel McGary was arrested as a horse thief, he left his wife, Mary, and the couple’s four children—eleven year-old Florence, nine year-old Maria, five year-old Arletta, and two year-old Blanch—in a precarious position.  Mother, Mary, could not support the four children on the wages she earned as a domestic in Philadelphia.  Mary brought Florence and Arletta to CAS offices.  The two were fostered out the very next day to a family in New Hope, PA—forty miles from their mother and sisters.  Seeking temporary care for her two daughters, Mary—and once his legal troubles were over, Samuel—had to wait for four years to get their daughters back.  Along the way, the CAS visited and judged their home situation carefully.  While the girls were in its care, CAS officials noted Florence lagged behind other children her age.  At first, foster families described her as having character flaws, “untrustworthy,” for example.  Officially, CAS believed “feebleminded” children could be reformed in a good home; once Florence was reunited with her parents, now living in New York State, the young woman was enrolled in a school for “feebleminded” children.

The Children’s Aid Society of Pennsylvania records are full of stories such as these, of children whose parents—often their mothers—could not raise them or care for them on their own.  There, too, you can find stories of children overcoming odds stacked against them, and of volunteers who hoped they could save the city’s children, one at a time. This lesson will allow teachers to use transcribed versions of a small portion of these case files so students can analyze and understand first-hand what life was like for these children in the late 1800's.

How does continuity and change within Pennsylvania history influence your community today?

3. Students should then present their findings to the class and discuss what they learned about childhood during the 1800s.

Adapted for the website by Alicia Parks, Education Manager