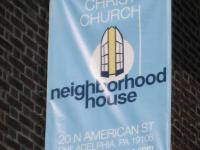 Last month our survey team visited Christ Church Archives in Old City. Founded in 1695 as a condition of William Penn’s Charter, Christ Church was the first Anglican parish in Pennsylvania and later became the birthplace of the American Episcopal Church.  It’s also known as “The Nation’s Church” because many prominent Revolutionary War figures, such as Betsy Ross and Benjamin Rush, worshipped there. In fact, the Continental Congress assembled at Christ Church for prayer and fasting, and Benjamin Franklin is buried at the nearby Christ Church Burial Ground.

When the original church was erected on Second Street, Anglicans were still a minority in the mostly Quaker city of Philadelphia. However, the congregation soon flourished and outgrew its humble brick and wooden structure. Construction of the new church began in April 1727 and continued until 1744. The steeple was added in 1754 making Christ Church the tallest structure in the thirteen colonies for the next fifty-six years. The interior was redesigned in the 1830s by Thomas Walter, architect of the US Capitol, and includes the baptismal font in which William Penn was baptized and a pulpit built by Thomas Folwell in 1769. 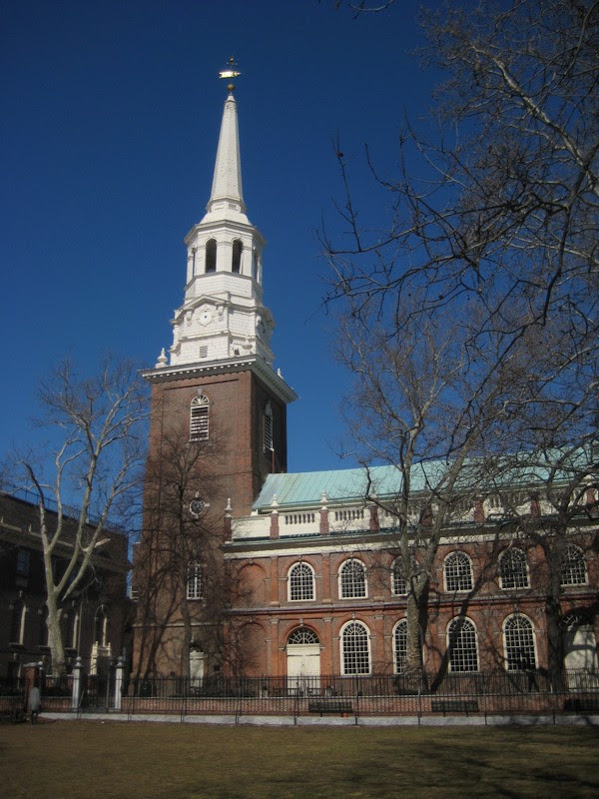 Christ Church was constructed between 1727 and 1744. The architect is unknown. A steeple was added in 1754 by Robert Smith, one of America's earliest architects.

In May of 1776, the Rector of Christ Church, Jacob Duché, invited the Continental Congress to worship at the Church.  A few months later, on July 4, 1776, the Continental Congress declared independance from England, and Duché quickly assembled the vestry. They voted to strike the traditional prayers for the King from the service. Pictured below is the Common Book of Prayer, one many treasures within the Christ Church Archives.  If you look carefully, you can see that all petitions to the Royal Family have been crossed out. 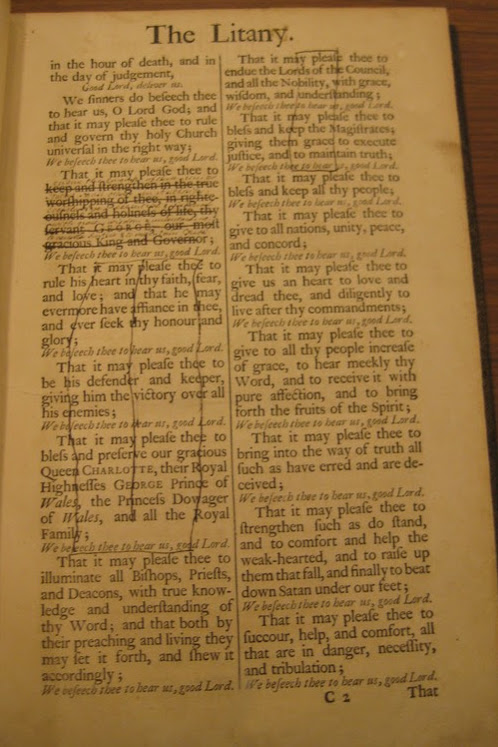 Another hidden gem within the Archives is the travel journal of Reverend Benjamin Dorr who served as the secretary and general agent of the Domestic Committee of the General Convention and later became the Rector of Christ Church (1837-1869). Dorr traveled throughout North America and records his visit to Jamestown, Virginia.  He writes on March 17, 1837:

"We are now (half past 11 AM) just stopping a moment at Jamestown, the first settlement ever made in the United States...A multitude of reflections crowd upon the mind on beholding this spot where our fathers landed 230 years ago, and commenced building their city; scarcely a visage of which now remains.” 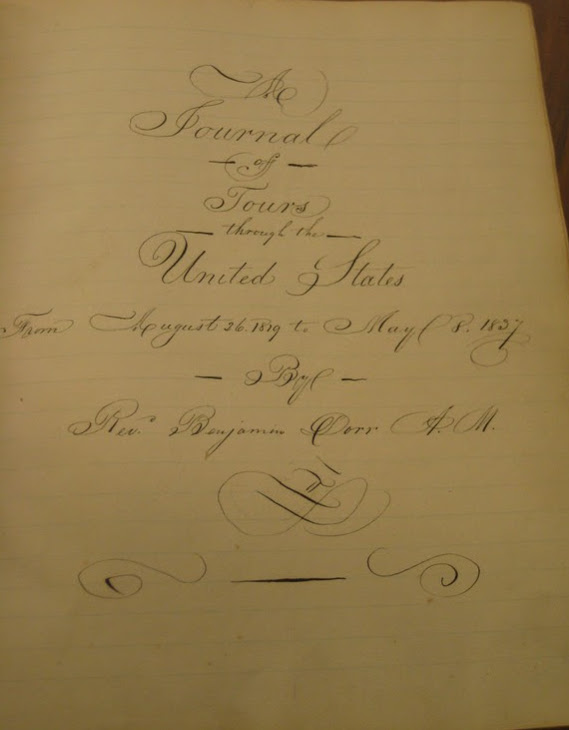 Christ Church Archives. The Journal of Tours Through the United States by Benjamin Dorr. 1819-1837. 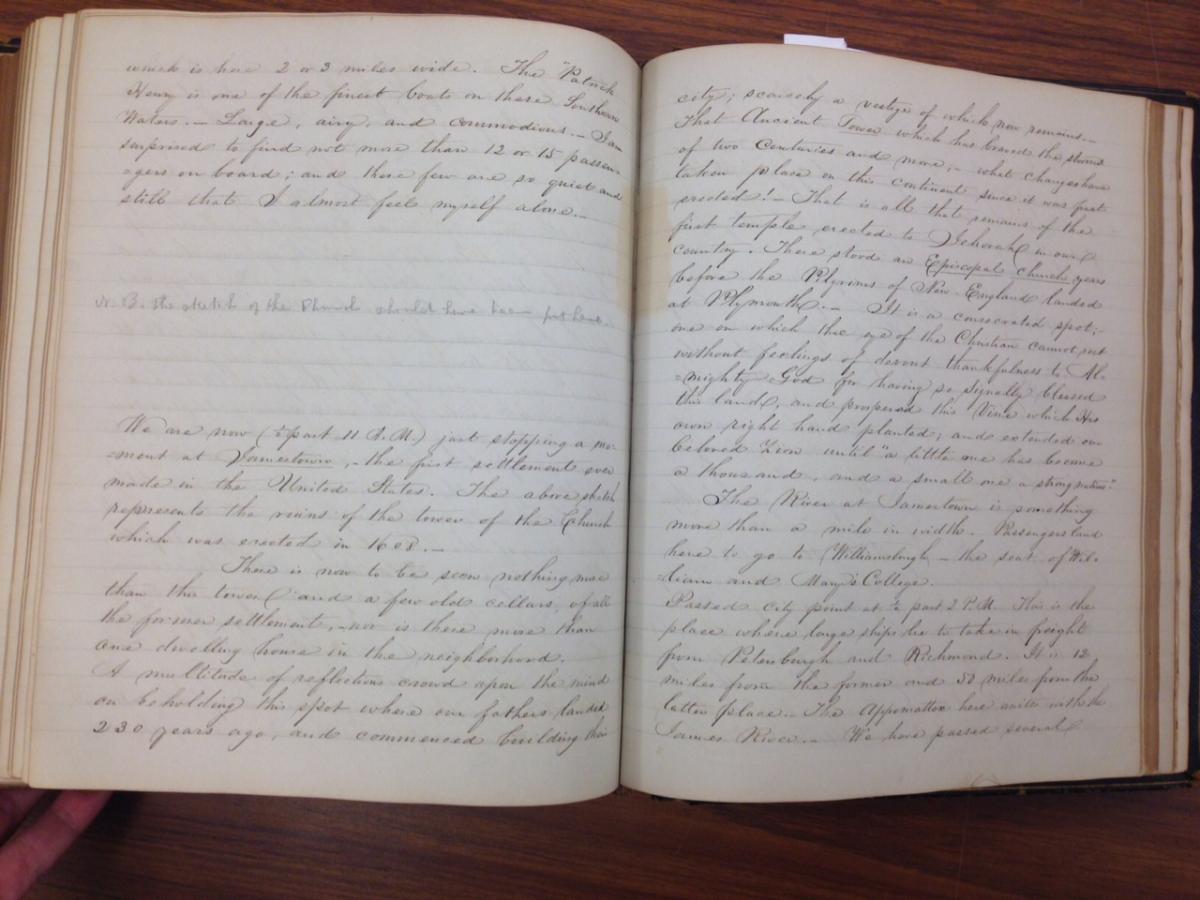 Christ Church Archives. The Journal of Tours Through the United States by Benjamin Dorr. Jamestown, Virginia on March 17, 1837.

Christ Church and its burial ground on fifth and Arch Streets is one of the ten most frequently visited historic sites in Philadelphia. Guided tours are available for visitors. In addition to being an historic site, the Church is an active Episcopal parish.

My family and I are cleaning out my Father's old bindery business in Phila. We found an old book that has hand written notes from a Bindery association...dates in the book are circa 1835.  I am looking to see if there is any interest in this publication.  I'm not sure who to check with. Can you point me to an organization who might be interested?