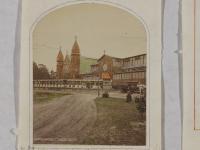 *This blog is the eighth in a series by Sarah Sharp, Global Educator for World Heritage Philadelphia.

Part I: Discussing the 1876 Centennial

If we were Philadelphia residents who attended the very first day of the 1876 Centennial Exposition on May 10, 1876 in Fairmount Park, we might have listened to President U. S. Grant and Brazil’s Emperor Pedro II when they addressed the crowds, exclaimed over the sound and size of the massive Corliss steam engine, and talked on the new telephone!

We might also have seen manufactured goods from around the world, viewed photographs of Yosemite and the West, eaten a banana wrapped in foil, and drank root beer -- all for the first time!

A wealth of records and materials exists in institutions such as the Historical Society of Pennsylvania, the Library Company, and the Free Library of Philadelphia as well as the Library of Congress and elsewhere.  Teachers and their students can not only look back in time to reconstruct the daily life of the Exposition, but also reimagine it for our own time.  (In Part II of this blog, we will consider how students might imagine such an event.)

The View from Philadelphia, 1876

Local leadership knew that other American cities were certainly also holding celebrations marking the country’s centennial.  Philadelphia elite were also aware that they were competing with international fairs held in previous years in London, Paris, and elsewhere.  Chairman John L. Shoemaker and other members of the committee in Philadelphia were determined to create a successful event in the city of the Declaration of Independence.

Prominent Philadelphians, such as John Welsh (1805-1889), who chaired the Centennial Board of Finance; Henry C. Carey (1793-1879), an international businessman, diplomat and writer; and Congressman William D. Kelley (1814-1890), played major roles in supporting the City’s candidacy as the Exposition’s host. Together they worked to gain support for the massive project to create fairgrounds in Fairmount Park, which included recommendations for road paving and bridge construction projects, as well as a “system of carriages, hacks, and cabs, with reasonable rents and charges, plainly defined, printed in at least French, German, Spanish and English….”

As plans for the Exposition gained momentum, Philadelphians’ involvement strengthened.  Various agencies sold stock subscriptions to raise funds for the Exposition’s construction.  The Pennsylvania Railroad created special schedules and lines to transport visitors to the 285-acre site in Fairmount Park, as well as arranging for their own employees and their families to attend.  The newly formed Committee of Philadelphia Artists, including major local individuals such as painter Peter Frederick Rothermel (1817-1895), sculptor J. A. Bailey, engraver John Sartain (1808-1897), and architect Henry C. Sims (1832-1875) agreed upon and arranged for an exhibit of truly international art in Memorial Hall.

Hundreds of Philadelphia youths and adults worked at the Exposition in numerous capacities, both in construction and staffing.  Only menial jobs, however, were available to African Americans, and they were prevented from participating in the actual building of the 250 structures on the site.  Philadelphia hotels and restaurants lodged and fed the hundreds of thousands of Americans and foreign visitors who travelled to Philadlephia to spend time and money at the Exposition, many of them arranging for their rooms through the Centennial Boarding House Agency.

The International Scope of the Centennial

Along with over one half of all states across the country who exhibited at the Exposition, dozens of foreign countries sent horticultural materials, art, machinery and other products to represent their nations.  Officials from these regions wanted to impress Americans with their choices of what to send, taking note that the overall message of the Exposition was progress.  People walked the aisles of the Exposition and the streets of Philadelphia who had never been here before, maybe never would again.  The result was a truly international event, both in visitorship and workers.

Because of the visuals created to record the event, especially photographs, colorful stereograph cards, and advertising cards, we can be virtual visitors ourselves!

So how might we have interacted with people and items from various global regions -- Asia, Europe, Latin America, Africa, the Middle East?  Concerning Asia, according to one historian, Dorothy Gondos Beers, “...[t]he Centennial was perhaps the single most important single source of lasting American fascination with Oriental art.”  Japanese diplomats and businessmen had long visited Philadelphia, and their contributions to the Exposition numbered 7,000 bundles of items, accompanied by many individuals, including craftsmen who assembled several buildings. Philadelphia newspapers included articles praising the Japanese exhibits at the Exposition, supporting broader Asian markets to sell American manufactured goods, and encouraging American employers to send their manufacturing workers to pick up new ideas for their work.

China’s ties with Philadelphia went back further than those with Japan.  Since the colonial era, trade with this empire had been extensive, even more so by the 1870s, with Philadelphians’ involvement in Chinese transportation and banking activities.  Starting decades before 1876, the Chinese Educational Mission, based in Connecticut, had begun sending Chinese boys to schools across New England to learn about American culture. We probably could not have missed the 113 noisy Chinese teens who visited the Exposition in August speaking English and wearing American clothes as they made their way through the various buildings!  Would we have heard them talking with President Grant, or seen their school work on display in the Main Building?  More broadly, would we have noticed that other Chinese visitors were wearing their traditional clothing and the men wore long queues?

What about the rush?  The Chinese delegation arrived late and hurried through completion of the setup of their exhibit, even hiring local Philadelphia women to assist in the process.    Would we have heard the terrible crash when one item fell to the floor?  Even worse, what if we had been the woman who dropped this precious piece worth over $1,000?  Some of us are tea lovers; we could have purchased samples of the 50 types of tea that the Chinese delegation brought?  How about the romance that developed between an American woman and a Chinese man who came for the Exposition?  What would we have thought if we had heard about that?

In terms of areas of the world even less familiar to us as virtual visitors in 1876, North Africa and the Middle East rank very high.  Egypt, Tunisia, and the Ottoman Empire all sent textiles such as carpets, Bedouin tents, Turkish and Macedonian tobacco, furniture, coffee, metalwork, firearms, jewelry, and thousands of other items that certainly would have intrigued us, maybe even tempting us to buy.

We might have read that the Exposition’s judges awarded many medals to the Middle Eastern exhibits -- maybe we would have even seen some of the objects later in American museums, such as the Philadelphia Art Museum.

Many European nations, as well as Russia, sent delegates with thousands of objects, which Americans could compare to their own, including musical instruments from Leipzig, Russian metal drinking cups, or Doulton pottery from London.  Certainly, we would not have missed the arm and torch of what became the new Statue of Liberty, completed in 1886.  Maybe we would go up the stairway inside!

What about what we might have thought as we took in the Exposition?  Many historians have written about the message of racial and European superiority that exhibits conveyed at this gathering.

Many the states across nation sent objects and representatives, even creating their own buildings, although there was only a very small Southern presence.  With the Civil War barely over, African Americans were refused full participation in the Exposition’s planning and exhibit space, although they requested that the Exposition include a statue commemorating one of their heroes.  This arrangement never happened for several reasons, including disagreement over the choice of art. Italian sculptor Francesco Pezzicar’s (1831-1890) The Abolition of Slavery in the United States proved to be a very controversial piece of bronze art.  Frederick Douglass (1818-1895), who had been invited to sit on the main platform at the opening ceremonies, initially was refused access until U. S. Senator Roscoe Conkling (1829-1888) came to his assistance.

What Remains from the 1876 Exposition?  What Doesn’t?  What Was Never There?

Seeing ourselves again as virtual visitors, we might have wondered what would happen next in the Exposition’s life after it closed in November 1876.  Different landmarks and cultural works remain here in Philadelphia.  For example, Memorial Hall how houses the Please Touch Museum. The Dying Lioness statue sits in front of the Philadelphia Zoo, and Thomas Eakins’s Gross Clinic (1844-1916) are now in the Philadelphia Art Museum.  There is an extensive music collection from the Centennial at the Free Library.  Edmonia Lewis’s Death of Cleopatra (1844-1907) is now at tthe American Art Museum in Washington, D.C.  Numerous buildings such as the Portuguese Government Building and the Maryland State Building were moved elsewhere, but then demolished.

We can find a generous number of major events associated with the 1876 Centennial for ourselves and our students to investigate.  The opportunity to create another Exposition for Philadelphia, especially one focused on Philadelphia’s World Heritage status and global connections, and also which gives presence to our current dilemmas and concerns, challenges us all to look at ourselves and Philadelphia in new ways.  (See Part II of this blog for ideas.)

I am very intersted in  the Chinese at 1876 Centennial Exposition, if I get enough resources,

I will write it in Chinese.Can you provide all the information on Chinese at 1876 Centennial Exposition ?

Thanks for getting in touch! Our Ready Reference staff should be able to help you with this. You can reach them by email (ReadyReference@hsp.org), or leave a message at 215-732-6200 ext. 209. Best of luck with your research! – Monica

Rydell, All the world's a fair : visions of empire at American international expositions, 1876-1916

Unit Plan
All the World's A Fair
Blog Post
Philadelphia: Active Host for the International 1876 Centennial Exposition...What About Now?